Guidelines try to keep up with evolving field and research of stem cells, the so-called "holy grail" of regenerative medicine 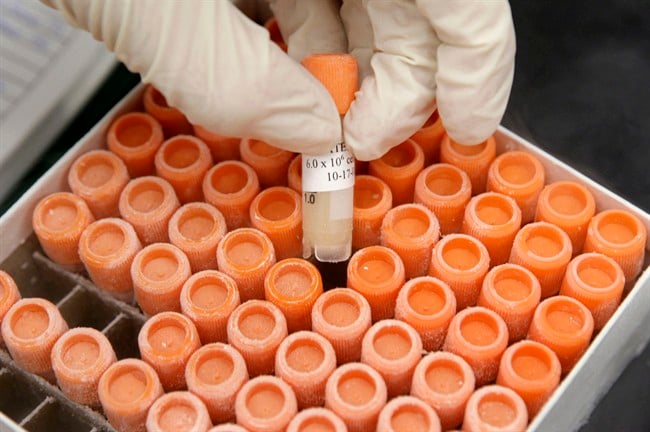 A researcher pulls a frozen vial of human embryonic stem cells at the University of Michigan Center for Human Embryonic Stem Cell Research Laboratory in Ann Arbor, Mich., in this Oct. 22, 2008 file photo. A global organization of scientists has released updated guidelines for research into stem cells, the so-called ‘holy grail’ of regenerative medicine. (Paul Sancya/CP)

TORONTO – A global organization of scientists and bioethicists has released updated guidelines for research using stem cells, the so-called “holy grail” of regenerative medicine, stressing that the protection of patients must take precedence as the field continues to rapidly evolve.

The guidelines developed by the International Society for Stem Cell Research (ISSCR) are aimed at assuring both the medical field and the public that research using these powerhouse cells is conducted with scientific and ethical integrity.

“ISSCR’s overriding goal is to improve human health through stem cell research,” society president Sean Morrison told a media telebriefing Thursday. “That means promoting sound and rigorous science as well as accelerating the translation of that research to help patients.

Dr. George Daley, director of the stem cell transplantation program at Boston Children’s Hospital, said the ISSCR is aware there’s “an industry already out there” that is marketing unproven stem cell therapies directly to patients.

Indeed, there is a growing international medical tourism business, in which patients desperate for treatments for serious or life-threatening illnesses travel to countries where unregulated clinics offer stem cell-based therapies that have not been proven to work and in some cases may be unsafe.

In December, friends of Spirit of the West frontman John Mann, who has early-onset Alzheimer’s disease, organized a crowdfunding campaign to help the Canadian musician pay for an experimental stem cell treatment not available in Canada or the U.S.

There are many kinds of stem cells in the body, but much of the research focuses on embryonic stem cells and what are known as induced pluripotent stem cells, or iPSCs. Both have the power to give rise to almost any type of cell in the body, from brain and heart to kidneys and bone. But iPSCs are developed from adult tissues like skin cells, which can be chemically manipulated in the lab to return to an embryonic-like state.

While research using stem cells derived from donated embryos is allowed in Canada, the U.S. and several other countries, the guidelines recommend some restrictions.

“The ISSCR holds that scientific research on preimplantation-stage human embryos is ethically permissible when performed under rigorous scientific and ethical oversight, especially in the areas of human development, genetic and chromosomal disorders, human reproduction, and new disease therapies,” the document states.

However, the group warns against scientists going too far when it comes to the use of new gene-editing tools such as CRISPR/CAS, which allows researchers to remove minute slices of DNA with incredible precision. The technology could be used, for instance, to remove a mutated gene that causes an inherited disease.

“This is obviously very important for biomedicine, but it also raises more challenging ethical questions, such as whether we should use the technology to edit embryos,” said Daley, who’s also a professor of biological chemistry and molecular pharmacology at Harvard Medical School.

“But we draw a very clear distinction given that there’s uncertainty about the safety of gene editing of embryos and not yet any kind of social consensus on whether it should be practised.”

Although using such tools to modify the genome of human embryos can be used for basic lab-based science to advance biomedical knowledge, Daley said using altered embryos for human reproduction is premature and should be prohibited “at this time.”

While stem cells hold great promise, with hopes they could some day be harnessed to create replacement organs and cure such conditions as Parkinson’s disease, macular degeneration-related blindness, diabetes and spinal cord injuries, the guidelines also caution researchers against “hyping” their results to the media and public.

“Scientists are often very excited by their findings and occasionally scientists and others can overstate either the clinical promise or the timelines needed in order to convert a finding into a clinical application,” said Jonathan Kimmelman, a bioethicist at McGill University who chaired the 25-member international task force that updated the previous 2006 and 2008 guidelines.

“The guidelines clearly urge scientists to balance their communications with each other, as well as with the public,” he said, “and to make sure that the projected clinical applications are not unrealistically optimistic.”

Rigorously designed patient trials that emphasize the safety and efficacy of any experimental therapy are the gold standard of medical research, and that holds for stem cell research efforts as well, the guidelines stress.

“No doubt the path forward will be fraught with setbacks and not all of the clinical trials will work, but we believe that these trials will lead to new insights that will increase our chance of curing some of these diseases,” added Morrison, referring to Parkinson’s and other debilitating and often life-shortening disorders.

“And even if we only succeed some of the time, it will change the world for subsets of patients who are currently beset by these terrible conditions.”

Details of the guidelines and related articles were published Thursday in a number of journals, including Nature, Science and the Lancet.