How Canada has bungled the COVID-19 endgame

Amir Attaran: Canada is mismanaging its most significant peacetime crisis in a century and the seeds of our failure are everywhere. Here are four things that must change. 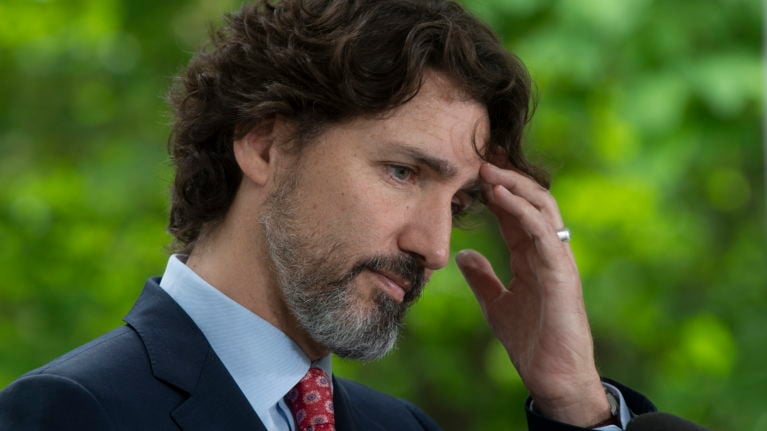 Trudeau appears at a news conference outside Rideau Cottage in Ottawa on May 29, 2020 (Adrian Wyld/CP)

About two months ago, as Canada was thrust into a terrifying lockdown, I wrote a piece in Maclean’s asking “What does the COVID-19 endgame look like?”  As a scientist I offered a roadmap for returning Canada to normalcy, and explained that it would be a long but predictable slog: first riding the lockdown to the point of bringing disease transmission to virtually nil, followed by a series of staged reopenings, monitored throughout by extensive COVID-19 testing and contact tracing to detect minor outbreaks quickly and squash them.

That approach is now so uncontroversial that no serious experts disagree.

But since then, it has become apparent that some provinces are not following that approach, and that Canada is stumbling through the endgame.

Our progress on “bending the curve” is halting and unimpressive compared to Europe and Asia. Our testing is so broken down that it lags behind Rwanda’s and Ethiopia’s. Our epidemiological data is so inadequate that even if we wanted to conduct the endgame well, often we cannot. Places like Toronto and Quebec are reopening too soon, risking to sicken—and kill—people needlessly, while the Maritimes and Prairies are reopening too slowly, strangling the economy.

Simply put, Canada is bungling its most significant peacetime crisis in a century.  That is why I am writing this sequel not just as a health scientist, but also as a constitutional lawyer—because the seeds of our failure are everywhere.

Let’s start with the big question: is Canada really “bending the curve”?

The answer is, “not much”. Many Canadians think we have because we are doing better than the United States—a country having no public health care, vocal COVID-19 deniers, and a president who recommends injecting bleach.  The Americans are obviously not the right comparators.  Better to compare Canada with other wealthy countries, especially confederations having federal-provincial complications like our own.

The graph below shows confirmed COVID-19 cases, averaged every seven days, and adjusted for population size. Each country’s line starts on the day that it crosses the threshold of 1 case per million persons, just before a runaway climb.

Canada (the black line) was the last country to cross that threshold.  That lucky turn gave us extra time to prepare, and the benefit of learning from others before us, which we could have parlayed into a lower infection peak.

Except our governments blew it fantastically.

Instead of the successful nosedive in France, Germany, Spain, or Switzerland—a feat their governments achieved despite a faster climb and higher peak—Canada’s curve resembles an undulating plateau or bunny ski hill.  By May 25, Canada was in the same place as April 4—fully seven wasted weeks, littered with thousands of dead.

We could have been like Australia. It is a large, sparsely populated, regionalized confederation of states, much like our own provinces. Australia crossed the threshold of 1 case per million just a day before us—we were tied in mid-March. But instead of dithering, Australia’s endgame smashed the curve hard and fast. Its results are almost as impressive as South Korea’s, but with less authoritarianism, in a society very much like our own.

Now Australia’s reopening, confidently, and we are not. Through it, they suffered barely 100 dead. We are nearing 7,000 dead—which works out to a per capita death rate only a little better than Donald Trump’s United States.

Let’s next talk about COVID-19 testing. Nobody disagrees that Canada needs more, faster testing. The scientific goal is not simply testing the sick, but tracing and over-testing the healthy around them, so as to isolate the positives for 14 days and nip new outbreaks in the bud. Do that enough, and it’s possible to drive COVID-19 down to virtually nil like in Australia.  This is the so-called “testing and tracing” strategy.

Yet Canada’s testing remains awful, especially in Ontario and Quebec.

The graph below shows over-testing as the ratio of total COVID-19 tests per positive result. The higher that ratio, the more over-testing, and the better the chance of spotting and containing outbreaks (and this is true regardless of the absolute number of tests, for which there is no magic number). If one chooses not to worry about the cost of testing—and one shouldn’t, because it is peanuts compared to hospitalizations or economy-killing lockdowns—then it is better to test too much than too little.

On this measure, Canada lags behind not just top performers like Australia and South Korea, but even Cuba, Ethiopia, Kenya and Rwanda (the epidemic will likely hit them later). Africans outclass Canada on sheer effort too: Addis Ababa’s feat of screening millions door-to-doors puts Montreal and Toronto to shame.

For Canada to be beaten by the world’s poorest continent is a humiliation. Can it be that Canada lacks the scientists, laboratories or wealth to do better? Certainly not. The fault instead lies in the cupidity and stupidity of our governments—for while the agent of the pandemic is a virus, the cause of Canada’s failure lies in its political choices.

Nothing shows Canada’s failure better than its inability just to count and analyze COVID-19 cases.

Canada still uses fax machines in medical practice and to communicate critical epidemic data. Since COVID-19 began Montreal hired two dozen clerks to type in faxed case reports. The Public Health Agency of Canada (PHAC) too collects case reports from the provinces by fax, but stupidly asks for an “email notification” of the fax without attaching the reporting form.

Of course this system is cratering. At this writing, PHAC possesses detailed data on just 36 per cent of known COVID-19 cases, either because of lateness, or because provinces do not want to share. If you imagine disease clusters to be a minefield, and Canada soldiering through, the provinces are only providing snippets of their maps, leaving Canada dangerously blind.

Without complete, timely data, it is impossible for scientists to analyze the epidemic optimally in real time. So it is also impossible for PHAC to know, until weeks later, whether efforts are succeeding to keep the virus’s effective reproductive number (called “Re”) well below 1, signifying that the curve is bending sharply down. Successful countries like Germany and Norway calculate and transparently publish this critical indicator daily, so they always know where they stand and needn’t fear a crippling “second wave”.

But PHAC, blinded by its own data incompetence, has yet to publish Re even once. Worse, PHAC signed a foolish agreement that gives provinces a veto on publishing analyses, the better to censor anything embarrassing. We are sitting ducks for a second wave.

I cannot exaggerate how dangerous such blindness is. Without complete, accurate, timely data Canada fights COVID-19 not by skating to where the virus’s puck is going, or even where it is now, but where it was several weeks ago.

Currently, just three provinces—in order, Quebec, Ontario, and Alberta—are responsible for 94 per cent of COVID-19 cases in Canada. Their failure to bend the curve is threatening health in other provinces and imposing massive economic costs rivalling the Great Depression. The longer it takes these irresponsible “have” provinces to perform, the worse the downturn, and costlier it becomes to “have not” provinces in the Prairies and Maritimes having very little disease. The current reality is not strengthening national unity, but tugging at its weakest seams.

And the response of Canada’s political class? To grumble, shrug and mutter that “health is provincial”.

But this excuse is lazy, immoral and wrong. The state has a duty to protect life. The Supreme Court has said that, “Health is a jurisdiction shared by both the provinces and the federal government.”

The Constitution gives the provinces jurisdiction over health care, which is different from public health, and “Matters of a merely local or private Nature”, which the pandemic certainly is not. It deals better cards to the federal government, whose jurisdiction includes epidemiological “statistics”, “quarantine”, and for enforcement, “criminal law”—or absolutely anything else during a temporary national emergency, like a pandemic.

Now in normal times, Ottawa rightly lets provinces run their own show. But a once-in-a-century pandemic is not normal. Either the federal government becomes more significant, or it ends up tearing federation apart while mistakenly believing it is protecting it.

The federations that successfully fought COVID-19 did not do so using a weak federal hand or by giving provinces free reign. Australia on Feb. 1 precautionarily banned travellers from China, and its prime minister and state premiers signed a partnership agreement on health care funding for COVID-19 in March, even before cases took off. Germany launched a single national testing strategy for COVID-19 in January, which by April was executing more tests per week than Canada mustered in several months. Switzerland’s federal council declared a national emergency in March, including a uniform national lockdown, which explains how they crushed their soaring curve so quickly.

None of this happened in Canada. Instead our federal government folded its cards.

While I do not like personalizing failure, Prime Minister Justin Trudeau is proving an unfit leader. He does not understand public health. He wrote a depressingly myopic article in The Lancet that reduced global health—a massive subject—to women’s rights. Pandemics have never concerned him, and are not even mentioned, much less prioritized, in the mandate letters he issued Health Ministers, which set stage for bizarre actions like destroying Canada’s emergency stockpile of personal protective equipment. Even during the COVID-19 crisis, his government has reiterated planned cuts to PHAC’s budget.

Instead the Prime Minister’s instinct is to help victims of COVID-19, whether by sending the Canadian Forces to care homes in Ontario and Quebec, or sprinkling cash upon distressed Canadians and businesses. The expenditure required for this economic life-support is enormous—in the ballpark of $40 billion monthly—and everyone agrees it is impossible to sustain.

Which leaves only one pragmatic and potentially affordable option: the federal government must intervene to bend the curve and stanch the bleeding: of lives, of money, of the macroeconomy surging into extreme recession—basically Canada’s future. Doing so will upset the failing provinces and the bromides of federation.

Too bad. Australia, Germany and Switzerland knew they could not wholly defer to the states, Länder and cantons. Canada cannot either, or it immorally makes Canadian lives expendable.

I am positive the federal government can be a constructive force, on all three scientific problems I spotlighted.  The Emergencies Act allows Cabinet to draw cordons sanitaires that isolate the Prairies and Maritimes from a second wave of infection, so their people can resume their lives safely. The power of the purse allows the Finance Minister to make bailout dollars contingent on the provinces successfully executing a national testing strategy. The Public Health Agency of Canada Act allows Cabinet to make regulations for how provinces share epidemiological data, so that we finally trash the fax machine, and have the timely epidemiological analyses needed for safe reopening.

All of this is possible. But for it to happen, the Prime Minister must reconsider refusing to use emergency powers and rejecting a national testing strategy for COVID-19, and fulfill his promise to share epidemic data and analysis openly. If he really wants to help, he will.

Lawyers have a cautionary saying: “the Constitution is not a suicide pact”. But unless Canada solves the problems of federation standing in the way of crushing a pandemic, that is what it will become.

Scientifically, we know what Canada’s endgame must be. I hope legally, we find the will and national cohesion to do it.