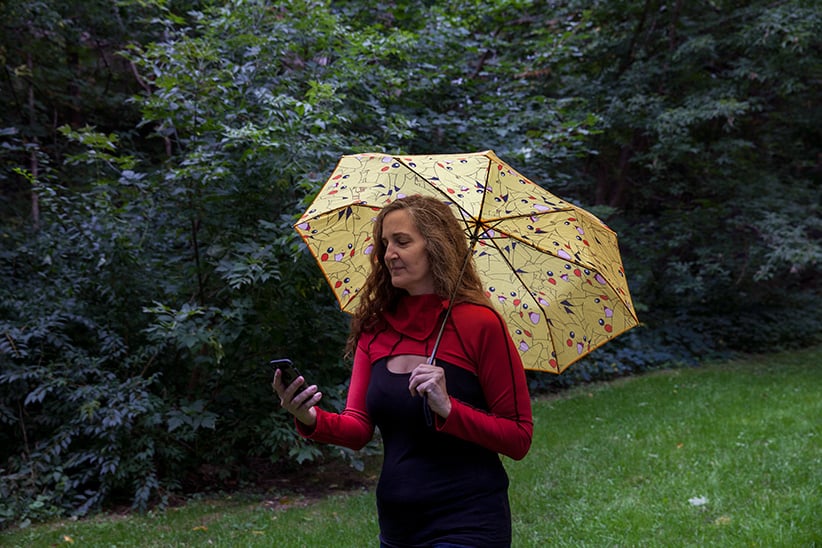 Angela Barsotti plays Pokemon Go in a park near her apartment in Toronto. (Photograph by Sarah Palmer)

In August 2015, I whacked my head on the luggage door of a bus while exploring the depths of western Ireland. Like most fools who hit their heads, I decided I was fine and proceeded on my merry way. I completely disregarded the headache, the lack of desire and inability to drink (hangovers after one beer!), the sudden unwillingness to look out the window on super-windy roads, a growing distaste for bright lights and loud noises, and the spinning whenever I stood up too fast. Things got steadily worse, but fortunately I flew home before it got really bad. Lucky for me the injury wasn’t worse—I could have died otherwise due to lack of medical care.

When I finally went to the doctor and was diagnosed with a concussion, she gave me all sorts of prescriptions, including “go home and stare at a wall” and “no more than 10 minutes of screen/reading time per hour.” I was also told to “limit stimulation to your brain” and that “everything is stimulating. Yes, even breathing.” At first, all this seemed impossible, but as my symptoms got worse, I found myself doing things like sitting down to consider what I’d have for dinner and waking up 16 hours later.

Every brain breaks and heals differently. I broke, among other things, my brain’s short-term procedural function. A quick example: I have these deep shelving units in my bedroom, with all my books pushed to the back and knickknacks and souvenirs from trips arrayed in front, so it looks like an Advent calendar. As you can imagine this can get messy as life becomes busy and I set things down quickly. Since I had to be extra quiet and stay home, I started tidying up the shelves. I could look at them and see what needed to be done, but I could not make a list. All I could do was be in the now and exist. If I started to make a list, by the third item my brain would be throbbing, my eyes would close and I would wake up three hours later. Even writing this paragraph is giving me a headache. This article is on its sixth day. Before my injury it would have taken two hours.

I need to take another break now.

Which is where Pokémon Go comes in. Hearing about this game that had people so engrossed that they walked into walls and off cliffs, I thought, “Hey, maybe this could overcome the overwhelming habit of sloth I’ve developed.” So I downloaded it in July. What this game does, quietly but perfectly, is encourage you to walk one more block, and then another, and then one more, as you tap into GPS and use a map to try to capture virtual creatures that seem to exist wherever you happen to be in the real world.

Suddenly your plan to hit two game hotspots in front of your building turns into a five-kilometre walk. Moderate, gradually increasing exercise is recommended for most brain injuries after a period of rest. The walking involved in Pokémon Go, which I started playing on July 17, was exactly what I needed after having stayed indoors and done nothing for almost a year. The nice thing is that if I’m too overstimulated to go anywhere, I can walk around my own block and still play the game. I don’t have to go far.

It’s not just me, either. My friend and his activity-/outdoors- hating son are walking 80 km a week playing this game. I met a woman the other day out playing; she has several agoraphobic, shut in or brain-injured friends who are leaving the house to play Pokémon Go.

I’m a movement teacher, so I know to the depths of my being that movement is health. But I wondered if I might be harming myself. Most likely not, says Toronto board-certified neuropsychologist Dr. Karen Wiseman. “The best [evidence-supported] treatment for concussion is initial withdrawal from activity and then gradual reintroduction of activity. The brain takes care of itself, for the most part. Some guidance from a clinician or two can be helpful and also, it’s important to get on a regular sleep schedule, eat well and take care of your spirit, too.”

My osteopath of many years, who is also a physiotherapist and craniosacral specialist, had been gently encouraging me to get moving for months. Gently, because you have to be gentle with a healing brain; I know because I’ve had exacerbation of symptoms from pushing myself, and it’s awful. It’s like you’re right back at the beginning with the swimming brain and the pain and the ice picks through your eyes into your optic nerves.

The osteopath happened to see me 18 days before I started playing Pokémon Go and 10 days after. She was astonished by the change in me. She noted that my eyes and skin were clearer, my internal fluids were all moving better and by every other single metric she could see and feel, I was healing better and faster than I had in months. Since then not a single thing has deteriorated or worsened, and I have caused myself no harm that the osteopath could find. In fact, she says I changed her whole opinion of the game.

I’m not “all better,” by any means. I still can’t drive for more than 15 minutes, am bothered by loud noises, can’t handle flashing lights and get flustered far more easily than I ever did. But every single person I know is remarking on the change in my “vibe” and mood, and my increased liveliness. If nothing else, today I walked home from an appointment for 90 minutes, and three weeks ago I would have taken a cab. With Pokémon Go, I have walked more than 400 km. Want to know who wins this game? I do.

Angela Barsotti is a Toronto-based movement, awareness and pilates teacher at Ugly Duckling Pilates who is fascinated by physiology and whole-body movement. Her own injuries continue to feed her deepening fascination with human movement and its potential for healing.