Canada needs its own vaccine for the novel coronavirus, says virologist Alyson Kelvin. 'If all countries are experiencing this at the same time, no one is going to be able to share with us.' 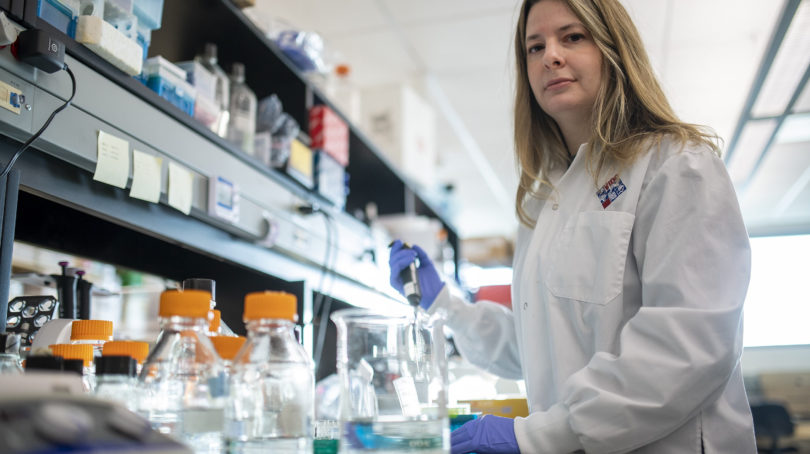 Alyson Kelvin at the University of Saskatchewan lab inside VIDO-InterVac in Saskatoon. THE CANADIAN PRESS/Liam Richards

Sometime last fall, a novel virus moved from an animal into a person and began to circulate speedily and stealthily from one body to the next. By the time any human being learned of its existence, COVID-19 had already taken hold.

Now scientists are racing to catch up with a virus that has infected more than 630,000 people globally in four months.

For Dr. Alyson Kelvin, that meant boarding a plane on March 27 from her home in Halifax, where she’s a virologist at Dalhousie University, to join other scientists at the University of Saskatchewan’s VIDO-InterVac lab in Saskatoon. Researchers at the VIDO lab study human and animal pathogens, and were the first in Canada to have a permit to work with the SARS-CoV-2 —which causes the disease COVID-19—to investigate the potential for a vaccine.

Kelvin was enlisted because she has substantial expertise conducting research on ferrets. SARS-CoV-2 doesn’t infect mice well enough for them to be used as reliable test subjects for antivirals or vaccines, says Kelvin.

“I’m supposed to go back (to Halifax) mid-April, but I don’t think that will happen,” she says.

RELATED: The race to get personal protective equipment to health care workers

Her hope is that this collaboration will help develop vaccine candidates to be put forward for testing. It’s important to have a vaccine made in Canada, she says. “If all countries are experiencing this at the same time, no one is going to be able to share with us,” says Kelvin. “We need to do it for ourselves.”

But developing and testing a vaccine takes time—it’s likely a 12- to 18-month process, say experts. Any vaccine must be thoroughly tested for effectiveness and safety before being rolled out. Otherwise, the risks exceed the risks of having no vaccine at all.

“You don’t want to sacrifice safety for speed,” says Dr. Gregory Poland, director of the Mayo Clinic’s Vaccine research group. “I’m a vaccinologist. I believe in vaccines. But I believe in being careful and being sure we are doing good and not causing harm.”

At the same time, with the number of infected growing by the hour, we are in dire need of answers now—yesterday, even. COVID-19 makes itself known only in some of its victims and appears as late as two weeks after a person is infected. “What you see now is not what’s happening now. What you’re seeing with COVID-19 is only the movie of what happened 14 to 30 days ago. We can say nothing about the future based on right now,” says Poland. “What we know about this disease is only around 12 weeks old.”

He says many key questions remain unanswered, including: What is the true infection rate? What is the case fatality rate? Do people without symptoms pose as much threat to others as those with symptoms? Will this virus recur annually? Can people become reinfected?

Dr. Jason Kindrachuk, a Canada Research Chair and professor of medical microbiology and infectious disease at the University of Manitoba, says the strongest evidence anyone has for how to respond comes from the 1918 Spanish Flu, which was the last time the world faced a new virus of pandemic proportions without any vaccines or therapeutics. And based on that evidence, the most important measure right now is social distancing to slow the pandemic and allow scientists and health systems some time to catch up.

“We ask and plead with the public to understand that this is going to take time,” says Kindrachuk.

Scientists are speeding ahead as much as possible, sharing information in a way that several of them describe as unprecedented. In New York, a team led by Dr. Florian Krammer, a microbiologist at the Icahn School of Medicine at Mount Sinai Health System, developed a serological assay—a blood-drawn test—that could help identify people who were infected and have recovered from COVID-19. They posted their findings on March 18 as a pre-print, which is a scientific paper that has not been through the process of peer review (an assessment by other experts in the field that is a standard part of traditional scientific publication). Serological testing will help provide a better picture of how many people have had COVID-19 in the community—instead of the very limited cases that have been confirmed by testing—and it will help identify the level of immunity in the population.

The Krammer lab has made the ingredients needed for this testing and the protocols and procedures available to scientists around the world, says Kindrachuk. In Canada, researchers will be able to start serological testing earlier than expected because of the assay. “This means we’re actually a lot closer than people realize to being able to do that kind of work,” says Kindrachuk. “It’s probably in the span of weeks as opposed to months.”

Information-sharing among scientists around the globe is happening at a lightning pace. “Everyone’s being really forthcoming with their data,” says Dr. Selena Sagan, a Canada Research Chair in RNA biology and viral infections at McGill University. Medical and science journals are putting out papers quickly, eliminating the traditional time delays built into the peer-review process. COVID-19 is the first global public health crisis where experts have used social media to circumvent conventional systems for sharing scientific information. “Leading scientists from around the world are sharing their experiences in real time,” says Kindrachuk. “They’re providing their insights and views on things as simple as clinical data or clinical presentation, the modelling and transmission events.”

RELATED: The struggle to stay safe from COVID-19 in a refugee camp

To study coronaviruses in a lab requires a high level of biosafety containment. Laboratory facilities with these capabilities are expensive to operate, and few labs in Canada have the clearance, says Sagan. “There are barriers for research to be performed on these viruses and so that can explain partly why we don’t know as much about them.”

Dr. Matthias Götte’s lab at the University of Alberta received a rapid response grant for COVID research from the Canadian Institutes of Health Research. While the rest of the university is shut down, the researchers in his lab follow social distancing protocols. They rely on computers and phones for communication whenever possible, often while watching kids at home.

“We have to deliver,” says Götte, chair of the medical microbiology and immunology department at the University of Alberta. He and his team are working on a potential treatment for COVID-19, remdisivir, which is produced by Gilead Sciences Inc., and was developed initially for Ebola. Over the weekend, Gilead announced they would expand access to remdisivir and early results are expected in the coming weeks.

Many scientists agree that the quickest and safest route to a treatment for COVID-19 is finding a therapy already in development that can be repurposed for the novel coronavirus. “Developing new drugs is important, of course, for a second wave [of this virus], but with this wave, we need to work with what we have and repurpose FDA-approved drugs,” says Dr. Nathalie Grandvaux, president of the Canadian Society for Virology and head of immunopathology at the Université de Montréal. “This is the only way to get the fast approval of a drug for COVID-19 that we urgently need.”

The poor quality of data currently available means it’s difficult to assess our trajectory on the curve. Asked how Canada compares to places like Italy, Dr. Tyler Williamson, associate director of the Centre for Health informatics at the University of Calgary, says it’s too early to tell. “Every place reports and tests differently,” he says. He uses the analogy of trying to predict which team will win the Stanley Cup based on the first three games of the season.

In Canada, our numbers will be influenced by the swell of people who returned home from other countries over the last few weeks. Williamson says it’s impossible to measure exactly how different social interventions will reduce spread. “We can’t directly compare places like Singapore and Canada because the social dynamics in Singapore are very different than they are in Canada or the United States,” he says. “And they’re different in Canada and the United States, too.”

But there’s no question in his mind that the threat of COVID-19 is real. What it means precisely for Canada, though, remains unknown. “We do know that we have to take this seriously. There are some real concerns there may be a hurricane coming and we need to be prepared for it.”

Poland says that conflicting messages from politicians around the world have given people false hope about risks associated with COVID-19 and the potential for a quick vaccine or treatment. This disinformation threatens to derail public health efforts to get a handle on the virus, he said.

“Science should never be beholden to politics, to peer pressure, even to economics,” he says. “Let science inform policy.”