ICUs in Alberta are drowning, say doctors. 'I've never had this happen in all my years of practice.' 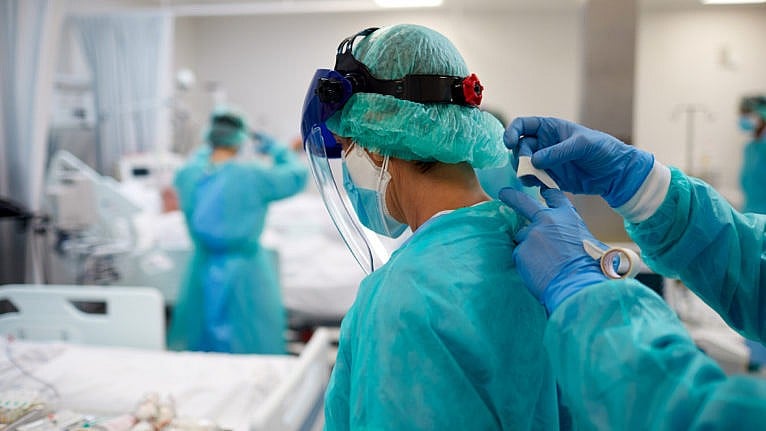 As the number of COVID-19 patients climbs in Alberta hospitals, its doctors are taking to social media to explain how serious the situation is, and how bad it may still get. In the early hours of Nov. 30, Dr. Daisy Fung, a family physician in Edmonton, tweeted that the intensive care unit at the University of Alberta Hospital was having to double-bunk COVID-19 patients, meaning each room has to accommodate two patients—and all their equipment, including ventilators—instead of one. Dr. Ilan Schwartz, an infectious diseases assistant professor at the University of Alberta, told Maclean’s that he’s seen double bunking in the ICU of University of Alberta Hospital. In a tweet, Schwartz explained the impact of adding beds to existing ICU rooms. “Worth stating the obvious but we can’t provide optimal care like this. Best practice for ventilated ICU patients with COVID-19 includes proning (turning patient intermittently onto their front). This takes many HCWs [health care workers] who need a lot of room. You can’t do that when double bunking.”

Kerry Williamson, executive director of issues management communications at University of Alberta Hospital, would not say definitively whether the hospital is currently double-bunking as the situation is “constantly changing. Patients are admitted and discharged from ICU numerous times per day,” he told Maclean’s by email. “We have the ability to safely cohort more than one COVID-19 positive patient in the same room, if space requires it.” Williamson said that the hospital, which has recently expanded its ICU from 23 to 28 beds, “continues to monitor and respond to the trend in demand for ICU beds by adding beds and teams.” (Update: Late on Nov. 30, Williamson confirmed that University of Alberta Hospital is “cohorting some COVID patients together in two-bed ICU rooms.”)

The demand for intensive care treatment isn’t restricted to that hospital. “Other ICUs have either been pushed to the edge as well, or are just absolutely drowning,” Fung explained. “And just because we are finding ways to cram physical beds and equipment into other spaces, it does not mean that there are more of us to take care of you.”

On Friday, a memo was sent by Alberta Health Services to Calgary hospitals warning that “due to limitations of the bulk oxygen systems at some adult acute care sites in Calgary and the expected increase in demand due to the COVID-19 pandemic, we need to reduce the demand on the bulk oxygen system.” Dr. Miriam Berchuk, an anaesthesiologist in Calgary, who tweeted an image of the memo, wrote, “I’ve never had this happen in all my years of practice.” 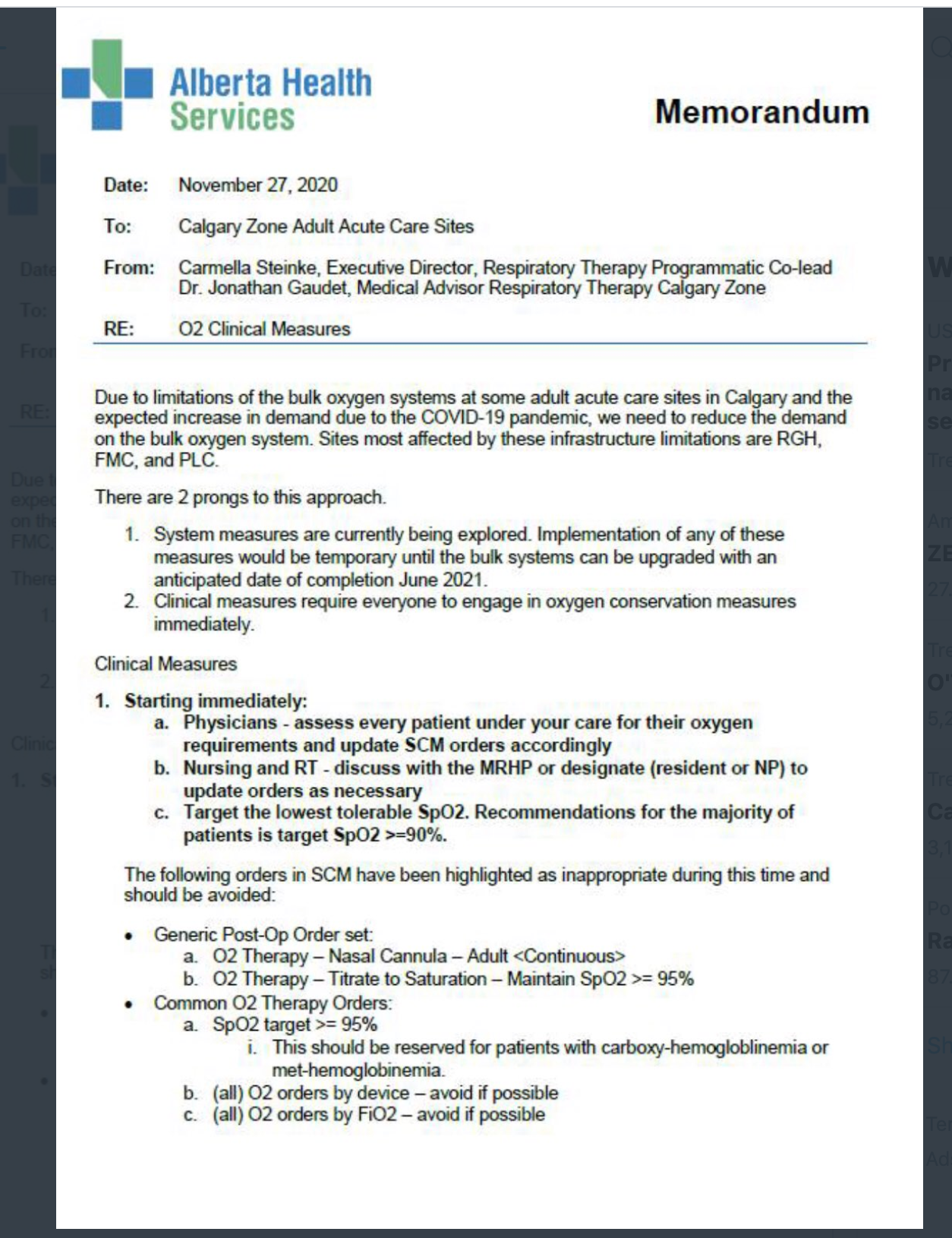 As of Sunday, another seven COVID-19 patients were admitted to Alberta ICUs, bringing the total to 95, well above the government’s benchmark of 70 ICU beds, beyond which the province had warned that restrictions would be needed. With 435 people in hospital with the coronavirus, Alberta is doing everything it can to expand capacity for COVID-19 patients to as many as 400 ICU beds, as well as more than 2,000 acute care beds.

The repercussions go beyond COVID-19 patients. Virtually every Albertan will be affected—crossing that 70-bed threshold meant “we’d be crossing into territory where we’d be impacting other patients’ care,” explained Dr. Deena Hinshaw, the provincial chief medical officer of health, last Wednesday. “Unfortunately, the way that [extra] space is made available is winding down care for people who can wait a little longer for it.”

She announced that Alberta Health Services would:

Alberta isn’t alone in feeling the effect of the continued second wave in COVID-19 hospitalizations. On Friday, Ontario’s COVID-19 Science Advisory Table released its latest modelling after the province’s number of COVID-19 patients grew by 63.2 per cent over the previous four weeks. Its experts warned that caseloads could soar to 9,000 per day by Christmas in a worst-case scenario. As well, death rates in long term care homes are climbing and, even under the very best scenario, the experts forecast that the province will see ICU admissions of COVID-19 patients climb to 200 by December, well above the government’s 150-bed red line at which medical procedures would be impacted.

In a projection for the Globe and Mail, mathematical modeller Jens von Bergmann, forecast that the number of hospitalizations could rise to 4,000 by Christmas, a massive increase from the current 2,438 COVID-19 patients in hospital, and one third-higher than the spring peak of 3,083 hospitalizations on May 6.

Still, many Canadian hospitals are carrying out more procedures than they did in the first wave, when the dangers posed by a brand-new virus meant a wholesale shuttering of departments and units, as Canadian medical staff braced to see if they would be as overwhelmed as their colleagues in France, Italy and Spain. That latest Ontario modelling also showed that while hospitals are reducing services such as diagnostic imaging and surgeries, they aren’t plunging to the levels seen during the first wave.

On Nov. 19, the Canadian Institute for Health Information (CIHI) released data on the impact of COVID-19 on planned surgeries. From March and June, surgeries fell 47 per cent compared to 2019, meaning a total of 335,000 procedures never took place. Life-saving and urgent surgeries (pacemaker insertions, cancer surgeries, fractures, heart bypasses) dropped 17 and 21 per cent, respectively. There was a four per cent decline in hospital births and trauma admissions fell by 10 per cent, though some of that may be attributed to more people staying home and thus not getting into car accidents, falls and sustaining other injuries.

Surgeries more likely to be postponed included gallbladder removals (down by 33 per cent) and hernia repairs (53 per cent), while varicose vein surgeries dropped 69 per cent and there were 73 per cent fewer tonsillectomies.

What is concerning, the CIHI data showed, was “admissions for unplanned health conditions such as gastrointestinal illnesses and heart problems decreased by approximately 22 per cent. The reasons for this change are not clear from the data; it may be that some people decided their condition wasn’t urgent enough to seek the care they normally would have.”

In September, a study in the Canadian Medical Association Journal calculated that the COVID-19 linked backlog of cases from just March 15 to June 13 was nearly 150,000 surgeries in Ontario alone. Furthermore, the study estimated it would take 84 weeks to clear the province’s backlog, and that’s before the cancellations from the second wave are included.

All those COVID-19 delays are being piled onto a system already under stress. In July, CIHI used 2019 data to determine that around 30 per cent of Canadians who need hip or knee replacement or cataract surgery “did not have their procedure done within the recommended wait times,” though CIHI acknowledged that there are huge regional disparities in wait times, and that urgent procedures, such as radiation therapy and hip fracture repairs, are done within allotted time frames.

As it gathers more data, CIHI admits there are some big questions that are, as of yet, unanswered: