Vapes were said to be a powerful tool in the global effort to get people off smoking, and maybe off nicotine, too. What went wrong? 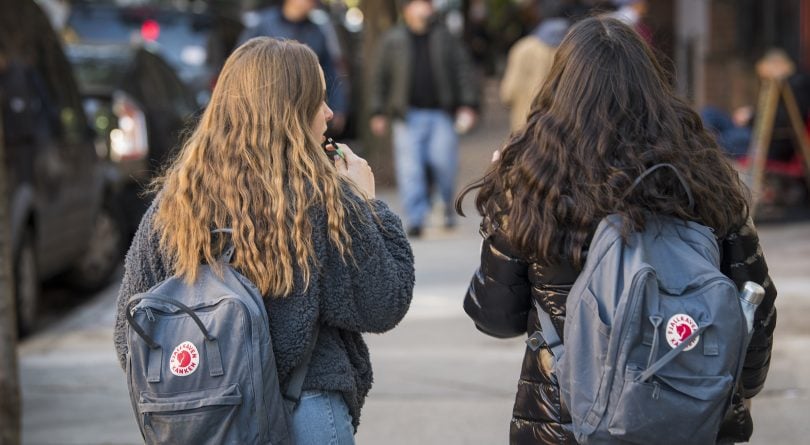 And all this from the e-cigarettes that, when they were legalized in Canada last year, were pitched as far safer than cigarettes. Instead of inhaling the cancer-causing smoke of burning tobacco, adults would get their nicotine fix by breathing in the aerosol of a flavoured liquid, heated in a stick or pen just enough to become vapour. Vapes were said to be a social good, a powerful tool in the worthy global effort to get people off smoking, and maybe off nicotine, too. What went wrong?

“For a lot of people, it’s astonishing,” says Elizabeth Saewyc, a professor of nursing at the University of British Columbia and research director of B.C.’s most recent adolescent health survey. “I do think we took our eye off things, because it had been billed as, ‘This is a less harmful approach to help people quit smoking.’”

READ: How bad is smoking pot for my lungs?

That provincial study, released earlier this year, showed one in five teens in B.C. had inhaled nicotine-laced vapour in the past month. Among older teens aged 16 to 18, the figure is nearly one in three. And this from a product that is illegal to sell or give to anyone under 18 under Canada’s 2018 Tobacco and Vaping Products Act. It’s also illegal to market vape products to anyone under 18.

“The phenomenon is incredible—it’s alarming,” says Robert Schwartz of the Dalla Lana School of Public Health at the University of Toronto and executive director of the Ontario Tobacco Research Unit. “We have created already a very large challenge to public health when we have such a large proportion of young people initiating vaping, many of them becoming addicted and potentially becoming long-term, regular vapers.”

The figures are similar no matter where you look, says Marvin Krank, a psychologist at UBC who studies the rise of vaping and how its marketing works. “I think what shocked us the most is how much it’s showing up in the schools,” he says. “The levels skyrocketed over the past couple of years. It’s everywhere.”

The trend has moved so fast since he became aware of it a couple of years ago, he adds, that this year some back-to-school hoodies feature secret vape pockets and tubes so students can e-smoke on the sly. “We had been winning the battle against nicotine. Nicotine is back. And the addiction in this generation of high-school students is going to be terrible.”

The issue matters not just because of the all-too-real physiological symptoms of addiction and withdrawal, but also because nicotine affects the developing teen brain, harming memory and concentration. As well, nicotine creates addiction in the young brain far more quickly than in the adult one, Saewyc says. She adds that people who become addicted before the age of 20 have an even tougher time kicking the habit later on.

READ: Big Tobacco has become Big Vape, but it’s up to the same old tricks

San Francisco-based JUUL Labs, which dominates the vaping markets in both Canada and the U.S., says its aim was never to hook kids. Its chief executive, Kevin Burns, stepped down in late September as public fury over vaping grew. “We did not create JUUL to undermine years of effective tobacco control and we do not want to see a new generation of smokers,” declares its website. Instead, the stated goal of JUUL and other manufacturers—some are partly owned by tobacco firms—was to bring a messy, century-old nicotine-delivery method into the sleek and technologically savvy 21st century.

In fact, JUUL set out to do for cigarettes what Apple did for computer design. Its vaping devices look like slender flash drives that recharge in a USB port and are wrapped up in groovy minimalist packaging. The American JUUL website focuses on how clean its devices are, boasting an “intelligent heating mechanism” and “freedom from ash and odor. No mess. No fuss.”

On its website, JUUL flatly states: “We certainly don’t want youth using the product.” The company voluntarily withdrew some of its flavours from store shelves in the U.S. late last year to help curb access by young shoppers. In Canada, it says it is committed to abiding by the laws that prohibit vape sales to young people and marketing aimed at them. The company has set up monitoring systems in this country, including secret shoppers and ID verification in stores to help ensure youth aren’t buying or ordering vape pods. 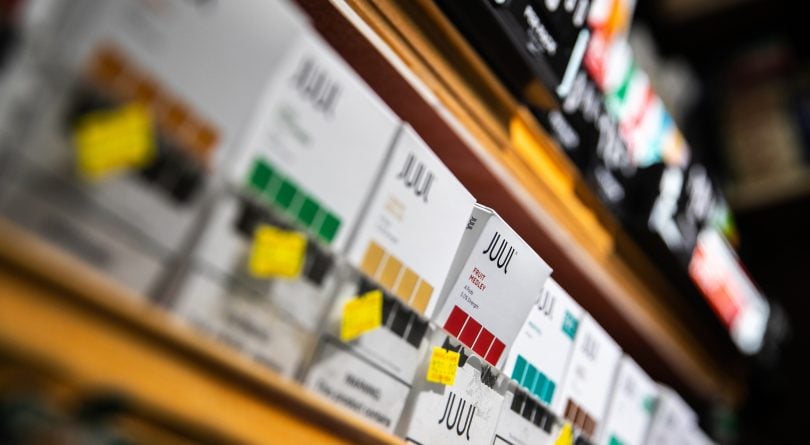 Yet the marketing of vape products across the many producers in this multi-billion-dollar global industry has been relentless, driven by a blizzard of fast-changing online advertising of flavours such as mango, lemonade and candy floss, Krank points out. Some of the online images he’s seen feature young children sucking on a pipe or vape pen. Canadian law or not, it’s clear that some advertising targets young people, not the adults who want to shed their addiction.

“How is bubblegum flavour, watermelon flavour designed to help people quit?” Krank asks. “These are the simple questions that show up in the alcohol literature in the way they marketed kinds of alcopops [alcohol-pop combinations].” The main message from the slew of advertising? Vaping is fun, healthy and cool, he says. It’s a familiar, lucrative playbook.

“We have a long history of these new drugs being introduced where the original introductions have made outrageous claims of safety and healthy impact on individuals,” he says. “Consider the early advertisement for cigarettes. It involved the use of doctors endorsing certain brands of cigarettes. Or the early marketing of heroin as a non-addictive cough syrup. Or benzodiazepines that were considered non-addictive sleeping aids. All of these things are the opposite of what is true.”

But teen addiction is only one facet of this swiftly moving crisis. Now, public health officials are struggling to understand just how dangerous vaping is—not just of nicotine, but also of cannabis.

In August, the world’s first vape-related death was reported in Illinois. Within weeks, the number had risen to 12 in the U.S.—and counting. At the same time, horrified American lung specialists uncovered hundreds of severe yet mysterious cases of vape-related illness among young people, many of whom—healthy until then—were on life-support. Physicians are still baffled about exactly what is causing the damage to lungs. Is it an additive to the vaping liquid? A lung-crippling oil residue? A contaminant? Rogue players? All they know is that the stricken include those who have vaped nicotine or cannabis, sometimes both.

Canada’s first suspected case appeared in mid-September: a teen from the London, Ont., area who had vaped nicotine ended up on life-support, and has since recovered. The day after, another possible case emerged in B.C., followed by two more in Ontario. At the end of September, Quebec announced the first confirmed case: a man who media reports said was in his 50s and began to vape in order to stop smoking. He has recovered. Health Canada, already in the throes of public consultations over how to further tighten rules over vape marketing to youth, is pleading with vapers to monitor themselves for unusual coughs, chest pains or shortness of breath, urging them to waste no time seeking medical help. Ontario, desperate for data on the emerging catastrophe, ordered hospitals to report serious vape-related lung disease.

And the panic hasn’t stopped rising. An editorial in the influential New England Journal of Medicine called the vape-sickness phenomenon an “epidemic,” the Centers for Disease Control and Prevention all but begged people to stop using the devices and the Food and Drug Administration launched a criminal investigation into how some are distributed. Some U.S. states outlawed the sale of flavoured e-juices and U.S. President Donald Trump flirted with extending the ban across the country. Meanwhile, giant retailer Walmart has banned sales of e-cigarettes in all its U.S. stores. Beyond North America, India banned vaping devices outright, while the U.K., following EU regulations, caps the nicotine content of vape pods to less than half of what’s allowed in Canada.

Amid acute vape-sickness alarm, nobody knows exactly what vaping does to the body over time. What is clear is that there’s a whole array of effects on the airways—from the nose to the lungs—and on the cardiovascular system, says Chris Carlsten, head of respiratory medicine at UBC. Evidence of dreadful effects on the immune system is mounting.

And then there are the chemicals in the vaporized liquid, sometimes including diacetyl, which imparts a buttery flavour to the vapour. Diacetyl’s damaging effects were first revealed several years ago when a batch of people who worked at a popcorn plant in Missouri developed a serious lung-scarring illness, Carlsten says. It’s often called popcorn lung disease.

Other chemical compounds in flavours are uncatalogued and often untested for their effects on lungs, says Krank. “It’s like the Wild West. Anybody can put anything in.”

Schwartz says it will take decades before we know how regular e-cigarette use affects the body. “The truth is, we don’t know for sure what the long-term health effects are. We have enough evidence for every serious scientist that I know to say, ‘If you’re not a smoker, then certainly don’t vape.’”

But what if you’re among Canada’s 5 million smokers? Are vape sticks a way to reduce the harm from cigarettes? “They are less harmful than smoking,” says David Hammond, a professor of public health at the University of Waterloo who studies tobacco use and vaping. “And they have an important role in terms of helping some smokers get off smoking.” He points out that half those Canadian smokers will die from tobacco-related causes if they don’t quit and that, amid the mounting vaping deaths in the U.S., it’s worth noting that roughly 1,300 Americans and 100 Canadians die from tobacco-related causes every day.

But Krank doesn’t buy the logic behind the reason vaping was approved in the first place. “This isn’t designed to help people. It’s designed to addict people. And it’s working.”

This article appears in print in the November 2019 issue of Maclean’s magazine with the headline, “The vaping crisis.” Subscribe to the monthly print magazine here.