While consumption of whole-fat milk is about half what it was 30 years ago, childhood obesity has tripled 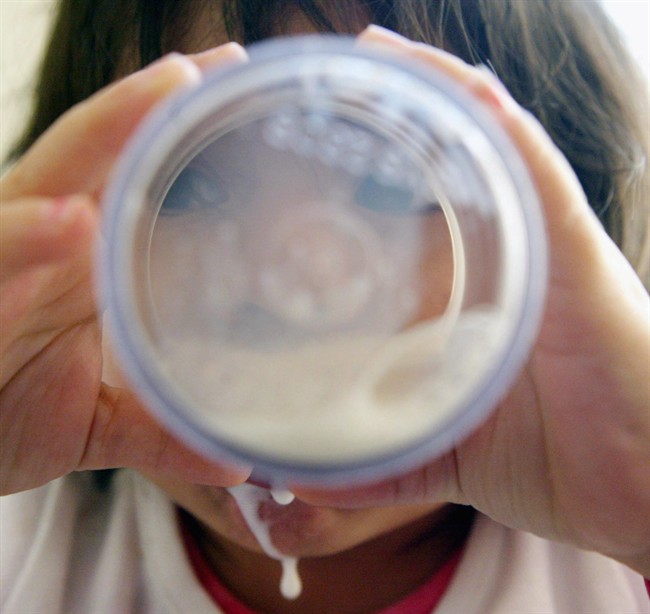 TORONTO – Young children who drink whole cow’s milk tend to be leaner and have higher vitamin D levels than those who consume low-fat or skim milk, researchers say.

In a study of more than 2,700 children aged one to six, Toronto researchers found that those who drank whole milk had a body mass index score almost a full unit lower than kids who drank one per cent or two per cent milk.

That’s comparable to the difference between having a healthy weight and being overweight, said Dr. Jonathon Maguire, a pediatrician at St. Michael’s Hospital who led the study.

Health Canada, the U.S. National Institutes of Health and the American Academy of Pediatrics recommend that children under two consume only whole milk, but parents are advised to switch to low-fat milk after a child turns two to reduce their risk of obesity.

Yet children who drink lower-fat milk don’t necessarily have less body fat and they also don’t benefit from higher vitamin D levels they would get with whole milk, the study found.

“So it’s a double-negative with low-fat milk,” Maguire said.

While the study design doesn’t allow a direct cause-and-effect relationship between a child’s weight status and the type of milk consumed, Maguire speculated that children who down a glass of whole milk may feel more satiated, and therefore may end up eating less than kids who drink the same amount of milk with a lower fat content.

“If children aren’t receiving fat, for example from whole cow’s milk, they need to make up those calories in some other way,” he said Wednesday. “So they may be consuming foods that are higher in calories and are maybe not as good for them.

“And that may be why these children’s weight is a little higher.”

Children who drank whole milk also had higher blood levels of vitamin D compared to kids given reduced-fat milk, the study found. All milk products in Canada are fortified with vitamin D to prevent the skeletal disease rickets and to promote strong, healthy bones and teeth.

“A child consuming whole milk had about the same vitamin D levels as another child consuming 2.9 cups of one per cent milk — which is actually a pretty big difference,” said Maguire.

Because vitamin D is fat-soluble, milk with a higher fat content may contain more vitamin D, so more of the so-called sunshine vitamin would be absorbed into the child’s bloodstream, he said.

To conduct the study, published Wednesday in the American Journal of Clinical Nutrition, researchers gathered data on 2,745 children who attended nine family medicine/pediatric clinics between September 2008 and August 2014. The clinics are associated with the research group TARGet Kids!, a collaboration between doctors and scientists at St. Michael’s Hospital and the Hospital for Sick Children.

Sixteen per cent of the children had BMIs that put them in the overweight category, while five per cent were considered obese. However, the study didn’t examine whether kids were given milk with a particular fat content because of their weight profile.

Public health campaigns have long urged people of all ages to cut down on high-fat foods to prevent obesity, cardiovascular disease and several types of cancer.

Yet even though consumption of whole-fat milk is about half what it was 30 years ago, childhood obesity has tripled over the same period, said Maguire, adding that recent research suggests fat may not be the health threat it was once thought to be.

“Almost all children in North America receive cow’s milk and parents make decisions every day about what kind of milk to provide their children,” he said. “And the reality is, we just don’t know what (is) the right kind of milk.

“So I think we need to look very carefully at the current guidelines and make sure that they are having the effect that we intended, because the question is really important to so many of us.”