Liverpool goes clubbing for all of us

Image of the Week: A sweaty, 3,000-strong crowd tries out maskless mass-gathering as inoculations wax and case counts wane in the United Kingdom 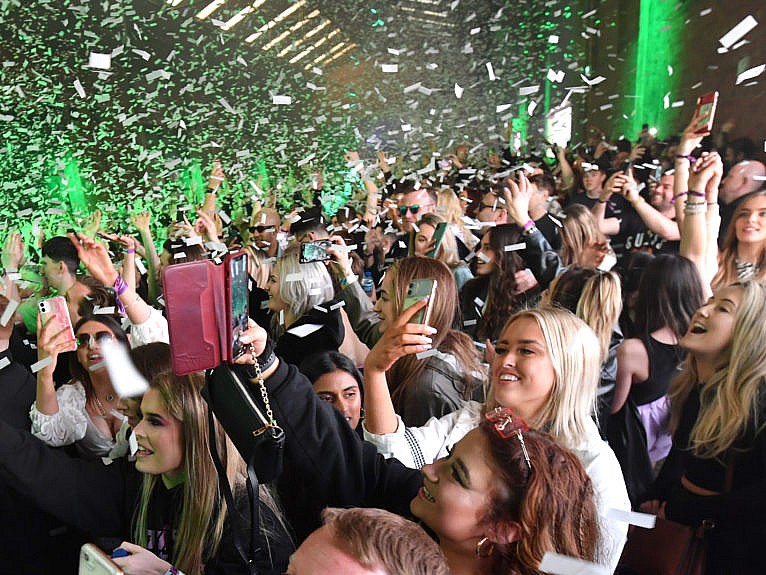 Confetti is fired into the crowd as Nightclub Circus hosts clubbers at the city's Bramley-Moore Dock warehouse in Liverpool, England. The event was part of a research program that will provide data on how events can be permitted to safely reopen. (Anthony Devlin/Getty Images)

The United Kingdom has been one of the strongest countries in the world on the COVID vaccination file, with more than 50 million Britons receiving at least one dose since the beginning of the year. Their rollout has gone so well that, by April, the government decided to dip a toe in the waters of normality and see how easily the coronavirus was transmitting. Ground zero, they decided, would be Liverpool, a city of half a million that has been ahead of the country’s overall COVID trajectory since July 2020, when an outbreak at a popular park ominously predicted a nationwide spike in the fall. Densely populated and with many disadvantaged residents, Liverpool was later used as a mass-testing pilot site; thanks to its tightknit community, the city has been able to squash outbreaks relatively quickly. So it seemed natural that Liverpudlians would raise their hands to test transmission levels in a halfway-vaccinated country. In the last week, they’ve hosted a 400-person maskless business conference, a 5,000-person rock concert and, most strikingly, a 3,000-person club event, pictured above. Attendees for all these shindigs had to produce negative COVID tests, but masks and social distancing were thrown out the window, right along with inhibitions and memories of a miserable year. Quotes from the clubbers are delightful. “We’re all on the verge of tears ready to go in,” one told BBC Radio. “It’s given me hope for the future.” You’re not alone, random Liverpudlian clubber. The world is watching with envy.

FILED UNDER: Coronavirus Editor's Picks Image of the week liverpool