Maclean's readers weigh in on the ice bucket challenge

Earlier this week, Scott Gilmore urged people to think before they donate. The opinion piece inspired much debate and feedback 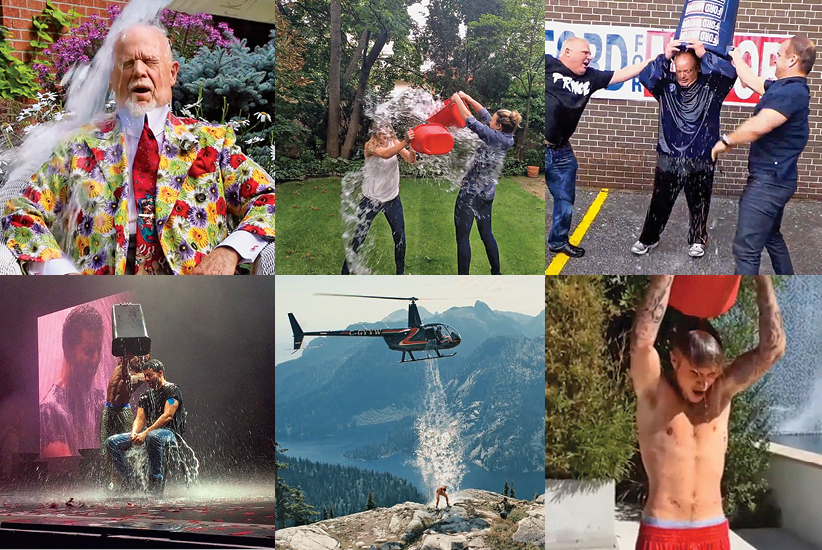 Readers there debated the issue in the comments section.

ALS is, as Gilmour states, a rare and, therefore, not commonly known disease. For this reason, the ALS challenge could not be a better reason for funding. This challenge has caused viral awareness of a disease most people would have never known about unless they were directly affected, or knew someone who was affected. Along with the awareness, the vast amount of donations the challenge has brought to the ALS foundation goes toward research and devices to help victims cope with the disease—a disease that, with funding such as this, will become extinct sooner rather than later. This, if I’m not mistaken, is NOT a misuse of donated money.

Having seen ALS affect someone so close to me, I know how awful this disease is, and how much this funding helps, and am thankful to everyone who has participated or donated, as they’re doing something for a wonderful cause. I respectfully ask that Gilmour keep his offensive opinions to himself, as they benefit absolutely nobody.

I’m sitting here trying to find the most respectful way to tell you that your article written about ALS is the most disgusting article I have read to date, which is impossible. Let’s just go through the despicable comments one by one.

Next: The three questions. Where did you get these questions from? Did you physically go out and ask a large number of people to reach the conclusion that those three questions are what we need to consider? And who are you to say that the ALS challenge fails all three? Proof is in the numbers. Millions of dollars have been raised. Who are you to say the kind of influence it will have, and its urgency? Do you think that, to loved ones of those currently battling ALS, this isn’t urgent?

Next, on to my all-time favourite part. “Only about 600 people die from it every year in Canada.” This makes me nauseous. Only? That’s 600 people too many. I’m going to go out on a limb and guess that you did not know any of those 600 people. But guess what? I did. You think it’s respectful to lump her with 599 and say “thankfully” it was only that many? Thankfully? Just because it’s “rare” doesn’t mean it doesn’t matter. If you watched someone who biked from Kitchener, Ont., to Ottawa, the strongest man you know, slowly deteriorate to the point where he couldn’t even tell his children he loved them, you would not hold the ignorant stance that you do.

Others responded to Gilmore with a challenge of their own. Here’s Graham Milner, development coordinator with Canada Without Poverty:

Earlier this weekend, former diplomat and founder of Building Markets wrote that the ice bucket challenge is bad for you, because it does not satisfy the greatest need for funds, and it is “narcissistically self-promoting.”

Is the ice bucket challenge bad for you? No.

Is the ice bucket challenge good for you? No!

Is it narcissistically self-promoting? Yes.

He (rightly) argues that there are more urgent needs for money in this world (heart disease, Ebola, or the refugee crisis in Syria).

But where his argument fails is that it’s possible to argue there will always a charity with a “greater need,” or one where you can have a greater influence. But, as a society, we MUST stop being critical of viral initiatives that work in exactly the way they were meant to, based entirely on their success.

Mr. Gilmore cites Livestrong, Kony 2012 and Movember, all of which were/are very successful at starting conversations, all this while giving a free pass to other charities that are less obvious but far more offensive and/or detrimental.

I invite Mr. Gilmore and (and others) to express equal outrage over charities that use misleading imagery, those that use the guise of charity for private-sector profits, those that increasingly depend on third-party fundraisers who, too often, take large “finder’s fees,” or those charities whose name-recognition put them above critiques of overhead/fundraising expenditures. These charities raise hundreds of millions of dollars every year, but do so quietly and avoid scrutiny, because they aren’t appearing on our Facebook feeds or creating hilarious Buzzfeed articles. Instead, Mr. Gilmore and others have criticized “ice-bucketers” (trademark pending) and their success in raising awareness for ALS purely because they went viral.

As a charitable fundraiser myself who has worked for many very worthwhile causes (humanitarian crisis, the global water and sanitation crisis and, currently, poverty elimination in Canada), I applaud the ALS Society’s ability to create a viral campaign. As silly as pouring (or, in some unfortunate cases, dropping) buckets of cold water over our heads, it has created a conversation, and raised buckets and buckets of money.

Creating a viral campaign, isn’t as simple as saying you are going to create a viral campaign. As Mr. Gilmore says, it has to be narcissistically self-promoting, (and compete with much more narcissistically self-promoting campaigns, such as, say, buying a bottle of pop with your name on it). To argue that most people who give to charity are doing so because the cause has the greatest need is, frankly, naive. Fundraising is no more than mass marketing with a more altruistic end.

I can imagine that most who donate to ALS this year will not do it next year. But some will, and that will create a bucket of legacy. And if, some day, somehow, they find a cure to this disease, then I am happy to pour a bucket of ice over my head, and whip out my VISA card.

So right here, I challenge Mr. Gilmore to dump a bucket of ice water over his head. If he accepts (or he doesn’t), I will make a contribution to his organization, because I know it will have a great impact.

Then, maybe, we can go back to talking about how, over 17 seasons, Lou Gehrig had 2,000 RBI, and a .340 batting average, because, with numbers like that, he deserves it.

Milner is development coordinator with Canada Without Poverty, a national anti-poverty charity dedicated to the elimination of poverty in Canada since 1971.

The majority of responses to my opinion piece were supportive and positive, but there were also many critics. The primary criticism is that ALS is a terrible affliction and, therefore, deserves to be funded. Anyone with even the most superficial knowledge of the disease would agree it is horrible. I didn’t suggest otherwise—would never suggest otherwise—and, if this is your criterion for picking a cause to support, that is certainly your choice. What I was arguing is that each of us should pause and ask ourselves: “How do I want to help, and is this charity the best way to do so?” Donating to a charity simply because there is a viral video is not a sufficient justification. In fact, “Because there is a viral video . . .” is not a good enough reason to do anything. At all. Ever.

The most powerful critique (in my opinion) was against my suggestion that the pool of charitable donations is finite, that $1 going to ALS means $1 less to other charities. There is some research to suggestion that this is the case, that viral campaigns cannibalize other causes, but the data (that I have seen) are inconclusive. There is also the interesting question of “moral licensing” (here, here and here), which argues that social charitable campaigns actually lead individuals to be less generous in the future. I think it is reasonable to argue (against me) that the $90 million that is going toward ALS research would not have been donated to anyone. This is possible.

Some suggested that because ALS has no cure (whereas malaria has a pending vaccine), it is more deserving. Cures, however, are only one part of this equation. Distribution, treatment, prevention and eradication can still take generations. I remain strictly utilitarian on this. In the last decade, millions more people died from malaria than from ALS. Therefore, until this is no longer true, I will be supporting the cause where my money has the greater chance of helping a greater number of people.

Several people have argued that if I or someone I loved was dying of ALS, then I would support the ice bucket challenge. They are right. I would not only donate toward its cure, I would encourage others to do the same, whether it was ALS or any other disease. But it would not change my central point, which is that people need to think about why they are donating, and not just do it because it’s popular this week.

It was also pointed out that I used a mixture of Canadian and U.S. statistics and that the data for donations were limited to the largest “marquee” campaigns. I didn’t like that, either, and would prefer more comprehensive and comparable data. Unfortunately, I was unable to find it. If others can, for example, provide the total amount of all donations made in Canada to treatment and research for major diseases, I will happily post it.

Some argued that I have no right to tell people where to donate their money. They are right. I don’t, and never suggested that I did. I believe in their freedom of choice, and my freedom to encourage them to make those choices based on some thought and not some fad. This is an important point to repeat. You can support any cause you want. It may be animals, or the environment, or peace, or culture, or medical research. But know why you are donating and don’t do it simply to get a few more likes on your Facebook page.

Finally, I was also criticized for simply being an “idiot,” “ass-hat,” “bastard,” “fuddy duddy” and “waste of space.” They may be right. My brother has called me all those names and, perhaps not coincidentally, he has also filmed a very funny ice bucket challenge.

In closing, be generous. Donate to the cause that matters most to you. Know why you are donating. Then do it again.