He just graduated and is ready to deliver babies. But are moms up for it? 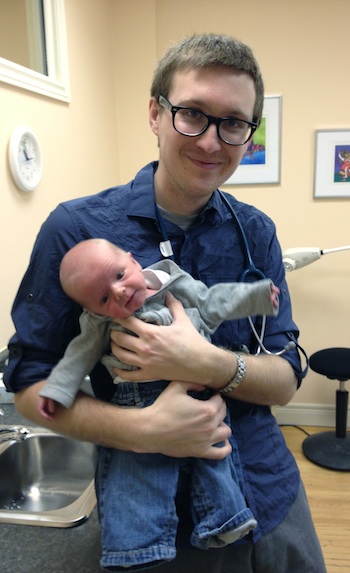 What do you call a male midwife? “Well, a male midwife,” says Juana Berinstein of the Association of Ontario Midwives. The word midwife means “with woman,” she says; it doesn’t actually refer to the professional, but to the client.

A male midwife, then, is how Otis Kryzanauskas, the first man to ever graduate from a midwifery program in Canada, will be known from now on. At 25, Kryzanauskas has completed a bachelor of sciences in midwifery from McMaster University to become the only registered male midwife in Canada. He expects to deliver his first babies as a professional midwife as early as August at his new job with Community Midwives of Hamilton.

Though seven Canadian universities offer midwifery degrees, in their almost two decades of existence no man has ever enrolled in the program. Kryzanauskas, who has participated in about 100 births already as part of his training, says it was hard being the only male student. People would sometimes tease him, mainly about the title—not unlike the ribbing that male nurses often face. He admits there have been times when clients have balked at the idea of having a man participate in the delivery. “Sometimes people don’t want you involved in their care,” he says. “Or their partners don’t want you in the room.” He’s learned not to take it personally.

Kryzanauskas was well acquainted with midwifery before he enrolled in the program. He was born at home in Kimberley, Ont., delivered by two midwives and an apprentice. His mother, Michelle Kryzanauskas, is a practising midwife. “To me it always seemed reasonable that, since he was a little kid, Otis wanted to be a midwife,” she says. Kryzanauskas remembers witnessing his own brother’s home birth when he was four; he got to cut the umbilical cord. “The actual delivery was so calm,” he says. “It seemed like the right way to bring a baby into the world.”

Vicki Van Wagner, the very midwife who delivered Kryzanauskas 25 years ago, still practises and teaches at the Ryerson University midwifery program. “It’s an important moment for the profession,” Van Wagner says. She hopes more men will follow Kryzanauskas into the field to boost the overall number of midwives in Canada, currently at slightly more than 1,000, at a time when growing numbers of women are seeking their care. For instance, Ontario may be home to the largest number of midwives in Canada, but even then, four out of every 10 pregnant women who want to have a midwife go without because there aren’t enough to meet demand. Whether they are open to having male midwives make up for the shortfall remains to be seen.

Larry Lenske, the only other man to have worked as a midwife in Canada, and who started before midwifery became a regulated practice in 1994, says he’s puzzled as to why no other men have entered the profession. Now retired, he acknowledges it’s tough to break into an occupation dominated by one gender. “Maybe it takes someone who is brave or stupid [to break the status quo],” he says. Whatever the reason for the absence of male midwives, now that Kryzanauskas has gone where few other men have, the question is, will he remain alone?