Accommodating new food preferences is manageable, but the fanaticism can be trying 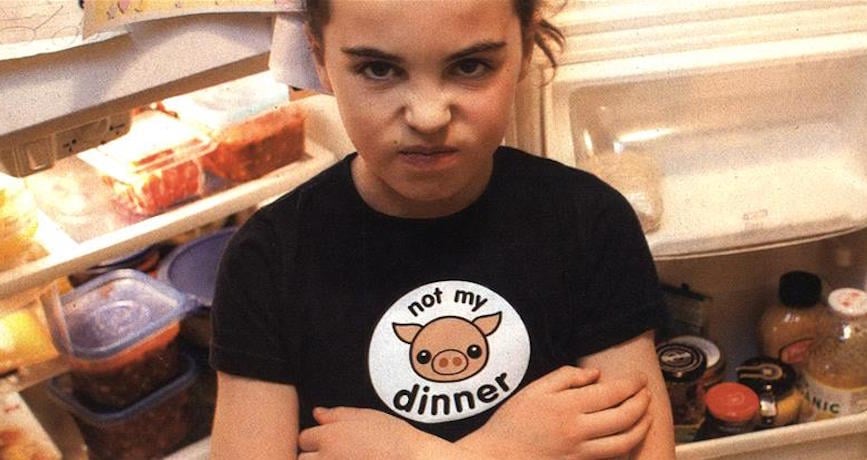 In the film Mommie Dearest, Hollywood legend Joan Crawford tries to force her adopted daughter to eat a piece of meat. “She negotiates everything like a goddamn Hollywood agent,” Crawford complains to her housekeeper. “Christina, eat your lunch. You are not getting up from this table until you have finished that meat.”

Two years ago in Vancouver, Carolye Kuchta’s six-year-old daughter Celia declared that she would no longer eat meat; her son had once made the same adamant pronouncement. Kuchta, a meat-eater, would never force her kids to eat meat but admits she had misgivings about the potential health risks of a meatless diet, and that switching to accommodate her kids’ food preferences was “pretty inconvenient at first.”

“Of course, as parents, we think it’s just a fad—like when Maxwell wanted to sleep on the floor in a tent forever, and that lasted a week.” Maxwell’s vegetarianism lasted six months. Celia was a different story. “She announced at the table one day that she was vegetarian, and that was it, there’s been no going back.” Celia turns nine in March. “She feels it’s her mission in life to help the planet and protect nature.”

Kuchta says her daughter’s righteousness was the greatest challenge at first. Celia is vigilant about keeping her vegetarian food far from the contamination of her mom’s meat dishes. “She would say, ‘I don’t want those beans because they were too close on that plate to where meat was.’ Or, ‘If that knife has touched meat you can’t put it on my plate.’ She won’t have anything that has a trace of chicken bouillon in it, not even organic chicken bouillon. Even if the spoon has gone into the pot that has organic chicken bouillon and then it’s gone into her pot, that’s not okay.”

For the first six months of Celia’s conversion, “she could not tolerate us saying the meat word,” says Kuchta. “We literally would have to say the m-word. ‘Maxwell, do you want m-word on your plate?’ ” When Celia was six, “We did have to have a small conversation about defining what the word fanatical means,” says Kuchta. “Now we can say the m-word. I try to support her ethics while not supporting her fanaticism.”

To help make meal preparation easier, Kuchta has educated her daughter on the difference between a protein and a carbohydrate. “I can say to her, ‘Maxwell and I are going to eat this. I would like you to look in the fridge or the cupboard and find a protein for yourself.’ So she’ll look around and say, ‘Actually, I feel like having an egg.’ I’ll say, ‘Okay,’ and cook her up an egg. ” Celia “really understands it quite well,” says Kuchta. “Occasionally, she’ll make a mistake. She’ll say, ‘I’ll have this as my protein,’ and I’ll have to point out it’s a carb.”

Jennifer McCann is a mother and the author of Vegan Lunch Box and Vegan Lunch Box Around the World. McCann tells parents, “If your child doesn’t want to eat meat, I think you should respect it and educate yourself a bit.” McCann says protein (found in nuts, beans, tofu) is essential to children’s diets. She suggests sitting down with the child and saying, “Tell me what vegetables you like and we’ll make a list.” The parent should then make a list of protein options, and ask the child, “Do you like this, do you like that?” “That’s the list you go shopping with,” she says.

Daisy Sharrock’s daughter Kyna became a vegetarian at age five. “It happened suddenly,” she says. “Once she cognitively knew what a bird was and realized this was chicken, she didn’t want to eat it.” Sharrock, a UBC grad now teaching math and chemistry in southern California, notes the irony of having a vegetarian daughter. She was raised on a farm on B.C.’s Denman Island, where her back-to-the-land father castrated his own pigs on the grounds that castration improves the taste of pork. For Sharrock, knowing where meat comes from is an enticement to eat it, not a reason to reject it.

At dinner, Sharrock “breaks out the beans and tofu” for Kyna, who, at lunch, is a “pretty solid peanut butter sandwich person. So far, she seems exceedingly healthy.” Like Kuchta, Sharrock has spoken to her seven-year-old daughter about her meatless zealotry. When Kyna pressures her parents to stop eating meat, “we push back,” says Sharrock. “We say, ‘This is a choice.’ ” Sharrock tells of the time at a restaurant when a friend ordered meat. “Well! I just lost my appetite,” Kyna said. “We told her, ‘No, you can’t take that tack. It’s not right to be saying such a thing at the table.’ ”