Misinformation is an infection that politicians have left to fester

Editorial: The info wars are on, and our political leaders need to step up and fight back 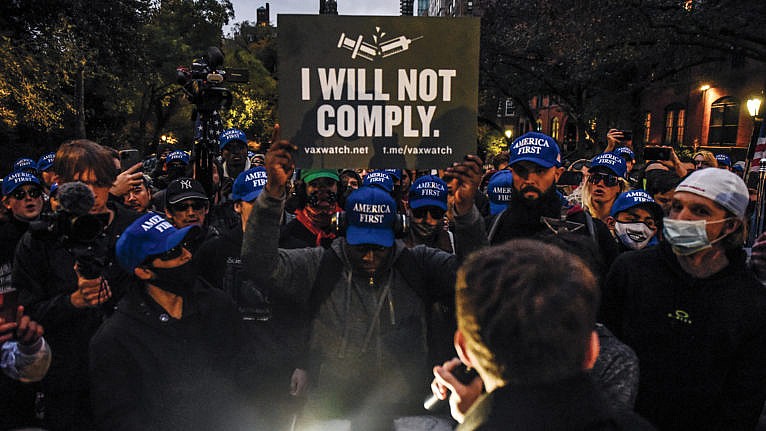 At the height of our recent federal election campaign, someone threw gravel at Prime Minister Justin Trudeau when he was campaigning in London, Ont. Police later charged the president of a nearby People’s Party of Canada riding association.

In March, a Manitoba man was sentenced to six years in prison for crashing his truck through the fence around Rideau Hall in Ottawa. He was looking for Trudeau and believed that Bill Gates is responsible for the COVID-19 pandemic.

A Laval, Que., QAnon believer was recently arrested for posting a threatening message about his daughter’s school after a Canadian QAnon influencer urged supporters to “shoot to kill anyone who tries to inject children under the age of 19 years old with coronavirus19 vaccines.”

Anti-vaccine protesters are increasingly causing serious risks to public safety—protesting at the homes of public health officials, hanging politicians in effigy and making a nuisance of themselves outside hospitals and businesses. Arguably, however, their quiet work is their most dangerous: the misinformation they spread online is lengthening and worsening the pandemic.

Anti-vaxxers have every right to express their views, but it is increasingly clear that the nature of their beliefs poses a risk that our leaders are failing to address. The central problem is that they believe things, upsetting things, that are demonstrably false. If you believe, as QAnon adherents do, that a secret conspiracy of child-sex predators is functioning at the apex of our society, you would be right to want to take action. The fact that the conspiracy theory’s central tenets are outrageously ridiculous—predictions from the anonymous cult’s leaders never come true—does not dim their appeal.

It seems clear that our traditional framework for thinking about public debate, the marketplace of ideas, cannot do the job on its own, in part because much of the conversation on social media is not actually public. Consider the case of the audio recording that convinced a Canadian woman not to get vaccinated, as described in Stephen Maher’s story. It appears to be a slick, professionally produced piece of disinformation, designed to confuse and mislead the listener, and it was shared through Facebook Messenger, a private communication. This is not the kind of thing John Stuart Mill envisioned in 1859 when he came up with the concept of the marketplace of ideas, where the competition of ideas in transparent public discourse results, inevitably, in truth.

While our media landscape shifted dramatically over the last few decades, creating new pathways for malicious actors and hucksters to mislead the public, legislators sat on their hands. Canada’s policy-makers need to make it easier to monitor toxic misinformation, seek voluntary compliance from the big platforms, regulate where necessary and empower public health communicators to push back harder and faster at dangerous lies.

Take, for instance, the @scienceupfirst initiative. It’s an innovative Canadian collaboration that works with researchers, scientists, science communicators and health-care experts to stop misinformation by amplifying and promoting evidence-based science on social media. It’s a rapid response to nonsense, delivered at the speed of the internet, and it may offer one important path forward; sunlight, after all, is always the best disinfectant.

This editorial appears in print in the February 2022 issue of Maclean’s magazine with the headline, “Why sunlight is always the best disinfectant—and how to let that light in.” Subscribe to the monthly print magazine here.