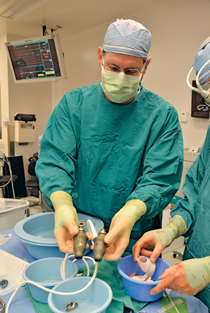 Craig Lewis lay dying in a Texas hospital bed, skin yellowed from his ailing liver, blood circulating through a dialysis machine that performed the function his kidneys could no longer fulfill. The 55-year-old was suffering from amyloidosis, a disorder that caused an abnormal buildup of protein in his vital organs. It was destroying his heart.

“This man was basically within an hour or two of death,” says Billy Cohn, a doctor at Houston’s Texas Heart Institute who oversaw Lewis earlier this year. Given Lewis’s dire condition, Cohn and veteran artificial heart researcher Bud Frazier received the consent of the man’s family to try something that had never been done before: the complete replacement of his heart with two continuous flow ventricular assist devices (VAD). Each VAD holds a screw-like rotor that spins rapidly to circulate the blood. It would leave Lewis without a pulse. There would be no beating heart, just whirring blades pushing blood through his body.

Frazier was confident. “It’s something we had been working on for years,” he says, referring to decades of research on the devices. In recent years, he and Cohn have successfully implanted similar contraptions in dozens of baby cows. “We weren’t just la-dee-da-ing,” Frazier says.

Cohn put together special material that could replace the frame of Lewis’s heart before the two doctors sewed their device into his chest. After the operation, Lewis quickly perked up. “It was amazing,” recalls Cohn. “He was able to sit up, wake up, get off the breathing machine, communicate with his family, and actually amazed us all.”

Lewis survived five weeks with the machine in his chest, leaving him with no pulse and no blood pressure. His doctors say he could have kept living had it not been for his amyloidosis. By the time his family decided to turn the off the device, Lewis needed liver, lung, kidney and bone marrow transplants, says Cohn. “The device never failed. It performed beautifully throughout the five-week period.”

Over the past decade or so, thousands of people—including former U.S. vice-president Dick Cheney— have had single VADs implanted to help the function of their left ventricles. Many of them have hearts still healthy enough to beat, while others don’t. Cohn has even had patients with VADs complain of a strange feeling only to realize they were in cardiac arrest. In 2006, Gerard Langevin became the first pulseless Canadian when Renzo Cecere of the McGill University Health Centre successfully attached a VAD to his heart.“Blogs described him as the first of the zombies,” Cecere laughs.

He says VADs are better than the “first generation” of heart pumps that use compressed air to mimic a natural heartbeat. About 800 people have received these artificial hearts—the Jarvik model—while they wait for a human heart transplant. But Cecere prefers VADs since they’re typically smaller in size, use less energy and are able to last longer than their beat-providing counterparts. A HeartMate II LVAD—one of the popular continuous flow devices on the market—can run on a bench top for 10 years with “no evidence of any wear or tear,” says Cecere. The spinning rotor is suspended within a magnetic field, causing little friction. He calls the invention of continuous flow devices a “quantum leap” in the ongoing effort to create a mechanical alternative to a flesh-and-blood heart transplant, which remains the “gold standard.”

Cohn and Frazier believe their achievement with Lewis is a step in that direction. “The only way you’re going to make completely self-contained mechanical replacements for the beating heart that are going to survive for more than a year without falling apart will be with a continuous flow,” says Cohn. “Will it look like this thing we put in? Maybe. Maybe not,” he pauses. “Probably not. But it will be based on the same principles, just like a DC-10 doesn’t look much like the Wright Flyer.”

For Cecere, doctors must improve VAD technology to make it smaller and easier to implant to avoid common complications like blood clots and infections. Researchers must also work to make them run without being directly connected to external batteries.

Not that the current technology doesn’t provide patients with a decent quality of life. Cohn says people with VADs often go back to work, spend time with their kids, play tennis—even skateboard. “The goal can’t still be a hospital-bound or bedridden patient,” Frazier adds. “It has to be a technology that makes a return to life very meaningful.” Work, time with kids, skateboarding—whatever works. These continuous flow devices evidently do.