Can you get fitter at 50 than you’ve ever been in your life?

What if it were possible to restore the body to peak physical condition? Author Margaret Webb finds out 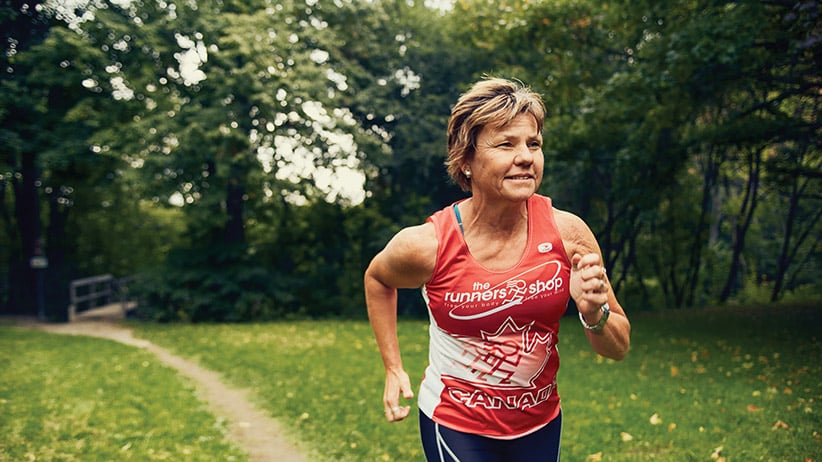 This year, some 275,000 Canadian women will turn 50. How many of them will, like author Margaret Webb, grimace at the sight of themselves in the mirror, or avoid looking in one at all? Webb is a former varsity athlete who, over time, “starched” on the pounds, despite training for a half-marathon in her early 40s. At 49, she still smoked. And then there was the menace of menopause. “Nouns started dropping out of my sentences as fast as estrogen was leaking from my brain,” she writes in her book, Older, Faster, Stronger. On one occasion, she forgot the word for bottle and asked someone to “pass the thing that holds wine.” A writer who forgets nouns? That didn’t augur well, and Webb still had goals for her career.

But what if it were possible to restore the body to peak physical condition? The question became the impetus for a year-long journey toward super-fitness in which she submitted to gruelling fitness tests, pushed herself physically to the limit, and talked to 80- and 90-year-old female track stars, all the while documenting it in her book, which suggests turning back the hands of time by 20 or 30 years is physiologically possible.

One stop in her journey was a visit to Greg Wells, assistant professor of kinesiology at the University of Toronto. Wells coaches elite athletes and is an expert in the field of extreme human performance. Webb wanted to know whether her goal to get fitter in her 50s than she’s ever been in her life was insane. Not at all, said Wells. “If we had a drug that did what exercise did, it would be the biggest revolution ever, and would be promoted all over the world as the greatest accomplishment of humankind.”

Indeed, countless experts told Webb that 70 per cent of the effects of aging are preventable. “By moving faster, we slow aging,” she writes, citing facts about DHEA, a naturally produced steroid known to protect women from muscle loss and increased risk of dementia, even after estrogen production stops. Exercise can pull off the same benefits as hormone replacement. “Stress the body,” she says, “and I mean push the pace; pump up the weights, pour out the sweat—and, at any age, the body gets the signal that you want to live, you need to live.”

But can a menopausal couch potato—someone with years of inactivity—whip herself into marathon-running shape? Webb responds, “Can you go from zero to running a marathon? If carrying a lot of weight hasn’t resulted in some disability that makes running impossible, then yes, I would say for sure.” It’s widely believed that women, in particular, have advantages that enable them to beat men in endurance races, such as the 217-km Badwater Ultramarathon, won twice by American Pam Reed.

Webb admits she was terrified at first that lifting her knees too high and pounding too hard on her flat feet would cripple her for life, but experience and research disabused her of that worry. “People say running ruins your knees. No, no, no, no!” she corrects. “Carrying extra weight ruins your knees!”

Webb’s nutritionist, Kristen Bedard, put her on a version of the paleo diet, dubbed by Webb the “cave-ma’am diet,” consisting of vegetables, fruit, meat, fish, a little cheese, but no bread, pasta or sugar. In nine weeks, Webb lost 11 lb. and gained more energy than she’s ever had.

“Set a massive goal” is her advice to older women. “People are capable of so much more than they believe.” In Webb’s super-fit year, she got faster and stronger at age 50 than she was in her 30s. Her book is rich with the stories of super-fit older women, such as Vancouver’s 87-year-old Betty Jean McHugh, a marathoner who’s broken more than 30 world records and didn’t start running until she was 50.

Webb’s running group consists of five women. “Women like us have discovered that it is as easy to socialize during runs as it is over martinis.” As for the hard hill climbs and speed work, she’s started to crave them. “The brain pumps out those feel-good endorphins; I can cruise on a runner’s high for hours.” Webb ends with a warning. “If you’re not working out, depression and mood challenges are going to be pretty huge. Our bodies are meant to move.”

FILED UNDER: aging retirement The Vault