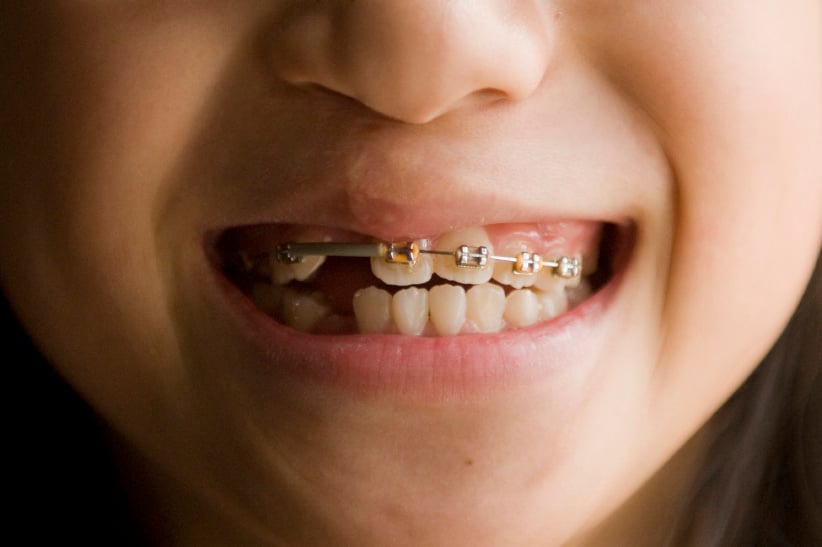 To get to the orthodontist, 15-year-old Tabatha Cook flies 257 km, equipped with clothes for up to three days. Her town of Baker Lake, Nunavut, has nobody to adjust her braces, so she flies to the slightly larger town of Rankin Inlet, population 2,577. Seven of her classmates, with their own parents or guardians, join her in varying numbers on the bi-monthly commute. After the flight, they take taxis to a hotel to drop their luggage and rush to get to the dental office, usually on time. “I regret getting braces,” says Tabatha. She falls behind on school work and once had to reschedule an exam—“just to change a wire.”

Orthodontic odysseys are routine for teenagers in the remote North. Health Canada covers orthodontics for Indigenous Canadians under the Non-Insured Health Benefits Program, as long as treatments are “medically necessary because their ability to chew is impaired.” Yet, patients must be patient. In 2014-15, residents flew from the 50 municipalities across the territories to one of the six northern towns or cities that have a visiting orthodontist. Documents obtained under the Freedom of Information Act show these trips cost $3 million and required 465 flights, including for parents or other escorts. (Actual cost of treatment was $5 million.) Assuming all trips required four flights, as they do for Tabatha and her mother, and that each child travels with an escort, then the average travel cost was $25,806 to get to each appointment.

Related: The North and the great Canadian lie

“Unfortunately we often have to pay for frequent transportation,” says Sony Perron, assistant deputy minister of Health Canada, responsible for First Nations and Inuit health. Orthodontists visit the six largest northern communities for three or four days every two months, seeing patients back-to-back while in town. The orthodontist who works in Rankin Inlet is based in Victoria. Since he is paid on a fee-for-service basis, it would not be lucrative for him to spend weeks flying to each patient in the North. Dental hygienists and dental therapists (a profession only recognized in the territories, Saskatchewan and Newfoundland and Labrador) can clean teeth, fill cavities and take impressions, and communities even smaller than Baker Lake have them in residence. Yet orthodontics is beyond their scope of practice. “We have to adhere to that reality,” says Perron.

Medical transportation accounts for more than one-third of expenditures for the Non-Insured Health Benefits Program. “It’s not sustainable,” says Jeff Reading, a chair on the First Nations Health Authority at Vancouver’s St. Paul’s Hospital. He warns that Health Canada won’t be able to afford the current transportation expenses forever, given the aging population and high birth rate in the North. “We basically give people what they need until the money runs out,” he says. “It’s like a train heading toward a wall.”

For now, braces come with boarding passes. Tabatha flew to her first appointment in April 2015—she had a misaligned jaw and crooked teeth—and in June, she had to delay a social studies exam for a wire adjustment. In blizzards, Tabatha was twice stranded in Rankin Inlet, while her mother, Cheryl, lost hours at her job at a crafts store. “I can guarantee you, we’re not sleeping,” says Cheryl. “We’re just sitting in chairs watching TV until morning comes so we can get on a plane and go home.”

Calm Air and First Air, the two northern airlines in Canada, signed a codeshare agreement in June 2015, leaving northerners with fewer flight options. “That’s another thing that screwed up our ways,” says Cheryl. “My daughter is not a happy girl in having to travel away from Baker [Lake] . . . Tabby mopes on Facebook. It’s constant complaining.”

Pregnancy, diabetes, asthma, wounds—other health concerns also require travel. Martin Kreelak, a 64-year-old man from Chesterfield Inlet, Nunavut, flew to Winnipeg last year for nose surgery. “Having to travel all the way with your nose plugged and bandaged, that was a torture,” he says of the return trip. “Inuit have a lot of patience to have to travel that far.”

Occasionally, patients try to resist medical travel. When Cheryl was pregnant with her eighth child in 2014, she knew she would be considered high-risk and sent to Winnipeg early. “When I was pregnant, I kept my mouth shut about it because I didn’t want to go,” she says. She eventually went for her annual check-up and was sent to Winnipeg six weeks before her due date, without her family. “It’s heart-wrenching when you can only hear your kids on your phone,” she says. In cases where the woman refuses to leave, she will give birth at the health centre in Baker Lake, then be urged to go to Winnipeg for a doctor to monitor the newborn.

Alternatives are possible. Health Canada is looking to sign more contracts with health professionals to visit communities more regularly, as Perron admits that the department has “not enough” of these contracts. In some dental fields, the Non-Insured Health Benefits Program is talking with licensing boards in the territories about training dental hygenists and dental therapists to do more procedures. Digital health care also holds promise; the government funds Infoway, an organization designed to connect doctors with patients remotely, although none of its current projects involve orthodontics. In the future, teenagers could get their braces tightened by generalist health workers at home and consult the orthodontist by phone or videocall.

Until then, Tabatha’s teeth demand travel. She’ll visit her orthodontist again in October —“I always wanted straight teeth”—but the appointment will seem too short to justify the journey. As her mother explains, “They’ll work on her teeth maybe five, 10 minutes, and then we’re stuck in Rankin Inlet until the next flight takes us home.”