Outbreaks and pandemics: a timeline 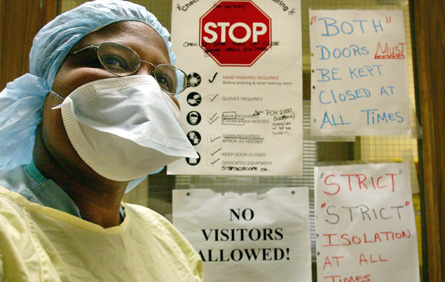 Swine flu, which has killed about 150 and sickened another 1,900 in Mexico since April 13, is spreading fast. Cases have now been confirmed in the U.S., Canada, New Zealand, Scotland and Spain, prompting governments to issue travel warnings and to declare public health emergencies. The swine flu has also stoked plenty of fear among the general public. (Photos: As a country dons surgical masks, the rest of the world braces for the worst) For a little perspective, here’s a brief history of global outbreaks and pandemics:

Severe Acute Respiratory Syndrome (SARS)
2002-2003
Death toll: Almost 800
Symptoms: High fever, headache and an overall feeling of discomfort. Some sufferers develop mild respiratory symptoms and a dry cough. About 10 to 20 per cent experience diarrhea. Most develop pneumonia.
How it spread: When a person touched a contaminated surface and then touched his or her mouth, nose, or eyes. Or person-to-person contact (coughing, sneezing). Chinese health officials in Guangdong province initially listed the first case of SARS as “atypical pneumonia.” It only went public when Dr. Carlo Urbani, who was working in Vietnam, reported it to the WHO (Urbani later died of SARS). Starting in early 2003, the virus spread to more than 30 countries, infecting 8,000 people, in a few months.

Avian flu (1997- )
Death toll: 257
Symptoms: Typical flu-like symptoms (fever, cough, sore throat, and muscle aches).
How it spread: Most commonly passed along through contact with infected poultry, or surfaces contaminated with secretion/excretions from infected birds. Person-to-person transmission is very rare. The first major outbreak occured in Hong Kong in 1997, with 18 cases (six died). The most recent outbreak began in December 2003. Avian flu has killed more than 60 per cent of those who have contracted the virus.

Hong Kong influenza (1968-1969)
Death toll: About one million
Symptoms: It’s often confused with the common cold. But the symptoms (high fever, joint pain, lack of energy) worsen and last longer. Symptoms normally cause a victim to become bedridden for up to two weeks.
How it spread: Human to human (coughing, sneezing). Named after the city where it was first detected in 1968, the virus returned in 1970 and 1972. The elderly were hardest hit. In the U.S., 34,000 fell victim to the Hong Kong influenza between September 1968 and March 1969.

The Asian flu pandemic (1957-1958)
Death toll: About four million
Symptoms: Fatigue, aches and pains and fever that can last two weeks.
How it spread: From person-to-person contact. The pandemic was first identified in the Far East in February 1957, and was detected in wild ducks in Southern China before mutating with the existing human flu strain. The virus first made its way to the U.S. in the summer of 1957 (in all, it would be blamed for 70,000 deaths in the U.S.). Although infection rates were highest among children and pregnant women, the elderly suffered the highest rates of death.

The Spanish flu pandemic (1918)
Death toll: 20 to 100 million
Symptoms: The flu was initially misdiagnosed as cholera, dengue or typhoid since (unlike other flu strains) victims experienced hemorrhaging from the nose, stomach, and intestine, or bled from the ears. Most deaths were caused by bacterial pneumonia caused by the influenza.
How it spread: Some researchers say it began in Tibet but moved towards Europe along trade/shipping routes. It was deadliest in young adults between 25 and 30, killing more men than women. By some estimates, as much as 40 per cent of the world’s population became ill.

Russian flu pandemic (1889)
Death toll: 1 million
Symptoms: Fever, pneumonia and traditional flu-like symptoms.
How it spread: The ‘Russian flu’ is believed to have originated in China, but spread rapidly throughout Europe before landing in North America, Japan and Latin America.

Bubonic plague — ‘The black death’ (14th to 17th century)
Death toll: 25 million — the disease originated in Asia but some say it killed 50 per cent of Europe’s population, having spread by fleas.
Symptoms: Vomiting, diarrhea, respiratory failure, headache and swollen lymph glands. Other symptoms included spots on the skin that are red and then turn black, heavy breathing, vomiting blood, and pain caused by the decaying of the skin.
How it spread: Bites from infected fleas, rodents, and lice. There are still between 1,000 to 3,000 cases reported annually, but antibiotics can be used to treat the disease if caught early.