The news that Ebola had erupted in Guinea, a country that had never fought this foe, was disclosed a year ago this week 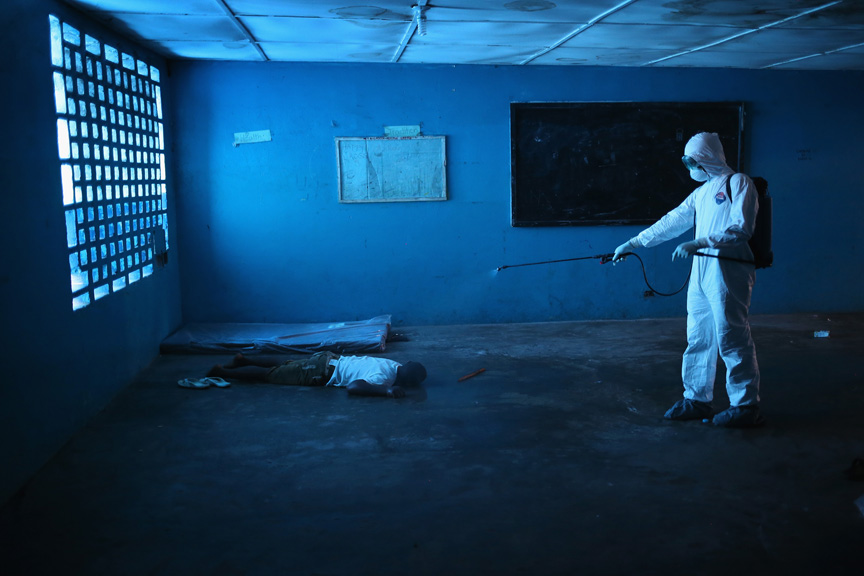 A Liberian health worker disinfects a corpse after the man died in a classroom now used as Ebola isolation ward on August 15, 2014 in Monrovia, Liberia. (John Moore/Getty Images)

TORONTO – It now sounds almost cliche to call the West African Ebola epidemic unprecedented. But nothing remotely like this outbreak has ever happened with this disease. Only science fiction writers contemplated Ebola on this scale.

That may well have contributed to the catastrophically slow response to the news — disclosed a year ago this week — that Ebola had erupted in Guinea, a country that had never before fought this foe.

Since then, 24,872 people in Guinea, Sierra Leone and Liberia have contracted Ebola and 10,311 have died, figures released Tuesday by the World Health Organization suggest. Another three dozen cases have spilled over into Nigeria, Mali, Senegal, the United States, Spain and Britain.

The following are recollections and predictions from three people who have spent the past year battling Ebola: Dr. Pierre Rollin, a veteran Ebola warrior with the U.S. Centers for Disease Control; Gary Kobinger, head of special pathogens at Canada’s National Microbiology Laboratory and Dr. Tim Jagatic, a Windsor, Ont., physician who works for Medecins Sans Frontieres.

Related: Scott Gilmore on the Ebola bogeyman in North America

Paradoxically, some of the Ebola experts were slow to recognize the outbreak’s cataclysmic potential. It looked to them like typical Ebola, in a new locale.

PIERRE ROLLIN: “The first wave in Guinea was still a normal outbreak…. (And) the first flare we had in Liberia was supposedly finished.”

GARY KOBINGER: “The entire first period of the outbreak — I’m talking about March, April and May — the first wave of cases peaked at about 30 cases. There was nothing out of the ordinary.”

But Medecins Sans Frontieres was concerned from the start. Their alarm was heightened when, within days, cases popped up in the Guinean capital, Conakry, 650 kilometres from where Ebola had first been spotted.

Jagatic, who had never worked on Ebola, landed in Guinea a few days after the first positive test results came in. He thought the situation was bad news from the get-go.

TIM JAGATIC: “Simply because it was in a major city, with two million people, and this city had fairly low hygienic standards. A recipe for disaster.”

Though the virus spread quickly into Liberia and then Sierra Leone, its progress appeared to slow in late spring. In reality, the outbreak was gathering momentum through undetected chains of transmission. By July an explosion of cases in the Liberian capital, Monrovia, made it clear this wasn’t a garden variety Ebola outbreak.

Canada sent its mobile laboratory, a staple of previous Ebola outbreaks, to the field in late June; 21 Canadian scientists have manned 15 lab rotations through West Africa since then.

Kobinger led the first team, which was based at Kailahun, in eastern Sierra Leone. Running diagnostics for an MSF treatment centre, the lab crew was startled by what the blood test results were revealing.

To halt the spread of Ebola, response teams need to identify and isolate patients quickly. People who have had contact with cases have to be monitored; if they start showing symptoms, they are isolated too. But the contact trackers couldn’t keep pace with the tsunami of cases. At that point, Kobinger estimated the team at Kailahun should have been monitoring about 4,000 people daily.

The porous borders between the three countries and the frequent movement of people across them fuelled spread of the disease. During his second stint in West Africa, in July, Jagatic saw those dynamics up close as he crossed from Guinea to Liberia and then into Sierra Leone.

TIM JAGATIC: “I had my passport. I had my documents. And I was crossing along with the Kissi people who don’t require these things. So we were kind of watching the responsible dynamic of what caused the spread happening.”

The unthinkable scale of the tragedy — or the infection of two American missionaries brought home for care — finally cracked the consciousness of the outside world. The WHO declared Ebola a global health emergency in early August. The UN held a special session in September. Countries started pledging funds and expertise.

Scaling up of the response took precious time, and lives continued to be lost. But the tide started to turn. Horrific projections of hundreds of thousands of cases did not come to pass.

The focus now is getting to zero — and never allowing an Ebola outbreak to get so out of control again.

GARY KOBINGER: “It was underestimated, for sure. This was the problem. It could be underestimated again. But, but, I think we’re making very big progress, definitely in terms of (Ebola) treatment and in terms of vaccine as well.”

TIM JAGATIC: “I’m very cautious to have any sense of closure with this particular disease and this particular outbreak simply because the belief was that it would have ended last May. And even though we’re trending in the right direction, these last few cases are going to be the most difficult to contain.”