'A woman on the move': Remembering an ALS advocate

Melanie York, a fierce advocate we profiled in March 2014, has passed away. A friend remembers her remarkable legacy. 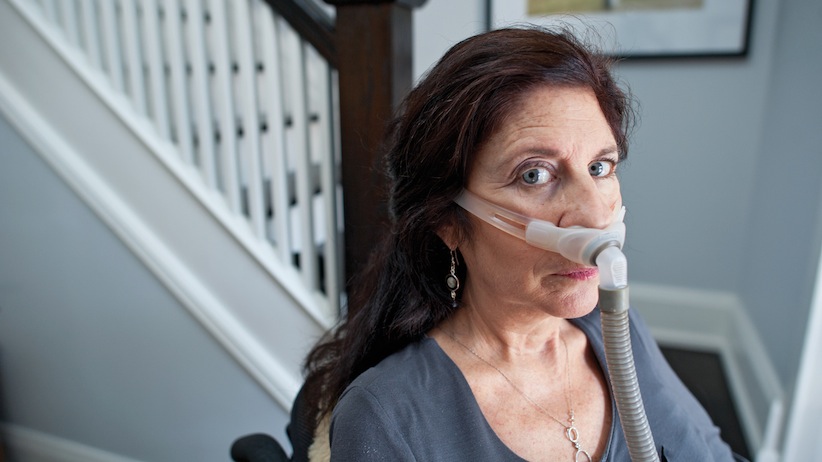 Melanie York at her home in Toronto in 2014

A little over a year ago, Maclean’s associate editor Kate Lunau wrote a feature story about Melanie York, a TV executive who had ALS, or amyotrophic lateral sclerosis. An advocate for those with ALS, York was frank and unflinching in discussing the disease. In a remarkable video interview she did with Maclean’s, her wit and intelligence stand as a testament to the fact that Melanie York was still very much the person she had always been. She died on March 9, 2015. Pearl Goodman, author, psychotherapist and one of York’s many lifelong friends, writes that Melanie York was “a woman on the move,” who, after her diagnosis, did all she could to publicize ALS, including taking the Ice Bucket Challenge: “We’ve got to make ALS sexy.” York did that, and so much more.

There will be no burying Melanie York.

My first glimpse of her was at Camp Wahanowin in Orillia, Ont., when she was all of 17, her purposeful gait taking her toward her boyfriend’s car, set to escape on their day off, a woman on the move.

Seven years later, we were reacquainted through a mutual friend who knew that we were both considering a trip overseas. Looking back, I do believe we were the laziest tourists ever to carry a backpack. This “almost year” we spent in Greece, Nepal and India would prove to be the beginning of a lifelong friendship. As travellers, we had heard of those who did odd jobs to help subsidize their journeys, and we actually found work. But, after a night out, we woke up briefly to acknowledge that we’d been fired before we even started. However, the zenith of our slothfulness had to do with our mission to follow the sun. While we hadn’t anticipated Greece’s cold, grey, winter season, spring did come around. We were staying in a small apartment 30 minutes from the beach. As we gathered our gear and walked past the living room, we noticed that the sun’s rays had found their way indoors. Without speaking, we moved the sofa, laid down our towels and tried to get a tan, amid raucous laughter.

Once we returned to Canada, Melanie took off. She made every minute count and then some. It was adventure after adventure, amid career moves that installed her as a well-respected and much-loved executive producer at YTV, OWLTV and Corus Entertainment. And she met her love, Haskell Beale, who would be with her to the end. She inspired and indulged his two daughters and her beloved niece and nephew.

Then, in 2008—after investigating symptoms of weakness and ruling out various diagnoses—came the devastating news that Melanie had ALS. She would say to me, “It’s like being buried alive.” It is a disease that strictly adheres to the law of diminishing returns, taking muscles and movement away bit by bit, yet it doesn’t affect the eyes, ears or cognition.

ALS may have been the ball and chain that confined her body, but never her mind or her delicious wit—she was born on Halloween, after all. She travelled instead to all the other places one can’t find on a map, places where she was determined to live by adapting. She went anywhere and everywhere, pushing the limits that dared constrain her. Wheelchairs, vans, hoists and planes transported her. She nourished her senses as she always had. With a flair for great style, she sported miniskirts, leggings, body-con dresses, and a piece that was designed especially for women in wheelchairs—a black motorcycle jacket with panels that, when zipped together, looked edgy and hip. If anyone ever said to her, “I love that top,” or that sweater or that piece of jewellery, it became yours in an instant. She was incredibly compassionate and generous, treating her caregivers like family—with the result that they loved her as their own.

Ever the producer, Melanie was always thinking of ways to publicize ALS. “We’ve got to make ALS sexy,” is how she put it and, in the summer of 2014, she got her wish with the Ice Bucket Challenge. She even did the challenge herself, in a wheelchair, and named Corus Entertainment to join in. That one act alone garnered $15,000 for the cause.

She was a gifted communicator and became a fierce advocate. She led an ALS support group and insisted in no uncertain terms: “You may have ALS, but you are not ALS.” She encouraged them all to tell stories about who they were, and to remember that who they really were hadn’t changed. She sat on the board, urging the members to reframe the focus and purpose of palliative care. A week before her death, she sent an email that left off with this: “If we cannot fix the illness, we still must continue to heal the patient.”

Knowing the end would come didn’t make it any easier to bear when she died peacefully on March 9, 2015, in her home, surrounded by those who loved her.

At her graveside, there was a symbolic moment. Spring was struggling with winter that day and the ground was muddy. As is the Jewish custom, we tried to take shovelfuls of dirt to cover the casket. Person after person wrestled heavy clumps from the mound, barely able to lift the shovel, and sank deeper into the mud. But we were determined. Maybe this was an experience of the burden ALS had exerted upon Melanie.

Then, after the last shovelful and the Mourners’ prayer, I heard the surge of engines overhead. I looked up at a clear blue sky, and thought of Melanie’s aquamarine eyes. The plane was futuristic in design, sunlight glinting off its white fuselage, speeding away, and I heard myself say, “There she goes.”

For more information on ALS, go to www.als.ca. You can see Melanie York’s inspiring video for Qualicare here. And you can read Kate Lunau’s story about ALS striking younger people—a story that featured Melanie York prominently—here.