The "science is still very unclear, it is not conclusive," says CFL commissioner Randy Ambrosie 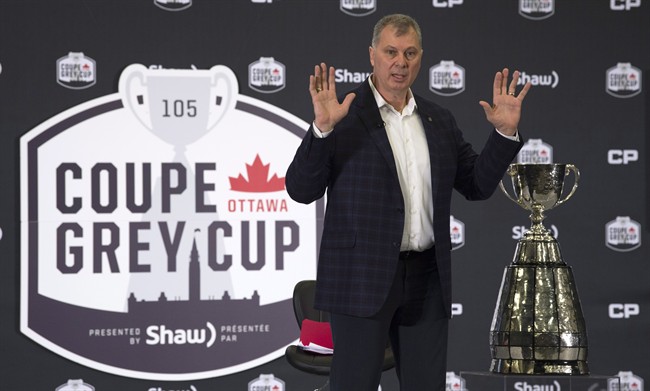 CFL Commissioner Randy Ambrosie talks about concussions as he responds to a question during his State of the League address Friday November 24, 2017 in Ottawa. THE CANADIAN PRESS/Adrian Wyld

Ambrosie said Friday he is “looking at all the evidence together and the answer is we don’t know” if there is a connection between concussions and chronic traumatic encephalopathy.

The NFL has conceded there is a link, but the CFL has not followed suit.

“The cause and affect is unclear, it just simply is,” Ambrosie told a news conference Friday in advance of Sunday’s Grey Cup. “We’re going to rely on the science. We’re all trying to understand this better but the science is still very unclear, it is not conclusive.”

MORE: The Grey Cup is haunted by head injuries. It doesn’t have to be.

The CFL is facing a $200-million class-action lawsuit over concussions and brain trauma.

The strongest scientific evidence says CTE can only be diagnosed by examining brains after death, although some researchers are experimenting with tests performed on the living.

Many scientists believe that repeated blows to the head increase risks for developing CTE, leading to progressive loss of normal brain matter and an abnormal buildup of a protein called tau. Combat veterans and athletes in rough contact sports like football and boxing are among those thought to be most at risk.

While he hasn’t seen enough evidence to be convinced that concussions can lead to CTE, Ambrosie says he is committed to making the game “better and safer for our players.”

“Concussions are in fact an injury, it is a brain trauma,” said Ambrosie. “We know that, no one is going to dispute that. Concussions aren’t good for the players. I’m happy to say we’ve seen some reduction in the number of concussions we’re suffering but I think we should also note we’re constantly looking for ways to improve our protocols.”

Ambrosie maintained he wasn’t being “blind to one side of the argument versus the other.”

Last summer, researchers in Boston released results of a study on the brains of 202 former football players. They said they found evidence of CTE in 177 of the brains studied, including in seven of eight CFL players.

The report didn’t confirm that the condition is common in all football players; it reflected high occurrence in samples at a Boston brain bank that studies CTE. Many donors or their families contributed because of the players’ repeated concussions and troubling symptoms before they died.

After years of denials, the NFL acknowledged a link between head blows and brain disease and agreed in a $1 billion settlement to compensate former players who had accused the league of hiding the risks.