Swine flu: One step from a pandemic

The World Health Organization is bracing us for the worst. 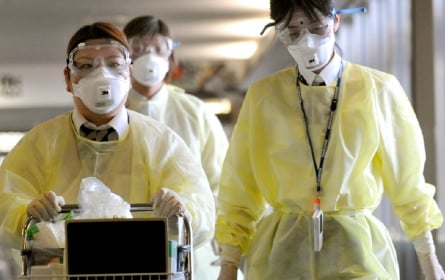 Every year, influenza kills up to half-a-million people around the world. In Canada alone, the flu’s annual death toll is close to 4,000. That’s eleven funerals per day. The current “swine flu” outbreak is nowhere near those levels. At last check, the fatalities (both confirmed and suspected) totaled 159, and although thousands of others have fallen ill with coughs and headaches and nasty muscle pains, most of the reported cases are in the “mild” category. In fact, many patients have already recovered. So why is the world bracing for a potential pandemic? What makes this particular flu so scary? Fear of the unknown.

The virus at the centre of the outbreak is a never-before-seen mixture that is part swine, part human, part avian. It has already proven quite capable of jumping from person to person, and because it’s so new and mysterious, our bodies have not built up any natural immunity. At a press briefing this morning, Dr. Richard Besser, acting director of the U.S. Centers for Disease Control, put it this way: “At the start of an outbreak, you don’t know what the course is going to look like. You don’t know if this is a virus that is going to fizzle out in a couple of weeks or one that is going to become more or less severe in the diseases it causes.”
Until then, here are today’s developments:

• The World Health Organization raised its “pandemic alert level” to Phase 5—a confirmation of “widespread human infection.” The escalation (Phase 5 is just one step below a full-blown pandemic) is the strongest indication yet that a lengthy, global outbreak is imminent. “All countries should immediately activate their pandemic plans,” said Dr. Margaret Chan, director-general of the WHO. “Countries should remain on high alert for unusual outbreaks of influenza-like illness and severe pneumonia. At this stage, effective and essential measures include heightened surveillance, early detection and treatment of cases, and infection control in all health facilities.” Just two days ago, the WHO ramped up its threat scale to Phase 4, a confirmation that the outbreak had shifted from “few human infections” to “sustained human to human transmission.” The jump to Phase 5 means the virus is spreading in at least two countries, and that efforts to produce a vaccine should be intensified.

• Health officials in Texas announced that a 23-month-old boy died of swine flu on Monday. Although it is the first confirmed fatality outside of Mexico, the boy was a Mexican citizen visiting relatives in Brownsville, Tex., when he fell ill. Authorities say the unnamed toddler also had other “underlying health problems.” There are now 91 confirmed swine flu cases in the United States, up from 64 the day before.

• Canada’s caseload is also climbing—from 13 to 19. Ontario has three new cases (from four to seven) and so does British Columbia (from three to six). “Thankfully, these cases, like the ones previously reported in Canada, have been mild,” said federal Health Minister Leona Aglukkaq. Nova Scotia has four swine flu patients and Alberta has two.

• The pork industry is plummeting. Although scientists are adamant that you won’t catch swine flu from eating swine, shoppers are not bringing home the bacon. Russia, China and Ukraine have banned pork products from some U.S. states, and in Egypt, the government has ordered a mass slaughter of 300,000 hogs. Said one Cairo farmer: “We are uneducated people, just living day by day and trying to make a living, and now if our pigs are taken from us without compensation, how are we supposed to live?”