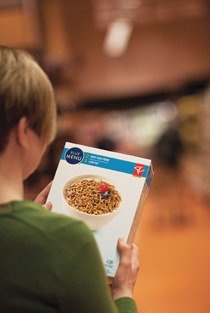 Scanning the shelves at Loblaw’s grocery stores, shoppers might notice a change to the President’s Choice line: labels that adorn Blue Menu products, its healthier options, are newly redesigned. On the box of Fibre First cereal, two green arrows sit next to the Blue Menu logo. One points up, indicating it’s “very high in fibre”; the other points down, and says it’s “low in fat.” On Blue Menu Angus burgers, a down arrow indicates reduced fat (compared to regular ones). The whole range of products is now marked with these arrows. It’s a small tweak, but Loblaw is hoping new labels will make it easier for consumers to make healthier choices, if they’re so inclined. Those arrows “put the product’s nutritional benefits front and centre,” says Al Lindsay, vice-president of brand marketing.

In Canada, most foods must be marked with a nutrition facts table (that little black-and-white box that shows how many calories and nutrients are in one portion) and an ingredients list. But research shows that consumers spend just four to 10 seconds choosing products at the grocery store, and many won’t bother deciphering these labels. At fast food restaurants, where single meals can pack enough calories for the entire day, it can be hard to get any detailed information at point of sale—especially with a line of hungry people waiting. According to biomedical anthropologist Leslie Sue Lieberman, we need to do a better job of making calories “visible” through food labels. This is necessary because it’s harder than ever to tell what we’re eating.

“We talk about smell and taste as the primary motivators for eating,” says Lieberman, a professor emerita at the University of Central Florida. “But vision is the primary one, especially at point of purchase or point of consumption.” We only need to see a food that looks delicious to start salivating; the stomach starts to pump out gastric juices, and the reward centres in our brains are primed. “We’ve got tofu turkeys, diet sodas, and fat-free pastries that have a mouth feel of fat, or the taste of sugar from artificial sweeteners,” she says. Hence the push for better labels.

One of the best-known examples is in New York City where, since 2006, some restaurants have had to post calorie information on menus and menu boards. But a new study suggests that calorie postings might not be doing their job. Researchers looked at restaurants in the inner-city neighbourhood of Harlem, and found that calorie counts were confusing at best.

At one restaurant, a breakfast sandwich with scrambled egg and cheese had a calorie count listed as “320-540 CAL,” depending on whether it was served with ham, bacon or sausage. And at a pizza place, the “garden fresh” 14-inch pie had 1,680 to 2,960 calories—without indicating how big one serving should be. None of these restaurants specified how to pick the lower calorie version.

“How do you order in the low end, or the high end?” asks study author Elizabeth Gross Cohn, assistant professor at Columbia University School of Nursing. “We have to make it easier for people.” Instead of just providing a range of calories, she recommends posting enough information to indicate which option is the lower-calorie one.

In the U.K. and Australia, some foods have nutrition labels on the front, showing the content of a few key indicators—fats, sugar and salt—colour coded like traffic lights, with red for stop, amber for caution, and green for go. It’s a system that’s had some success: following the introduction of these labels in the U.K., sales of breakfast cereals with green and amber lights grew twice as fast, while sales of foods with red lights dropped 35 per cent, according to the Australian Medical Association.

Still, unless these labels are mandated by government, it’s hard to see them spread very far. With food producers and sellers like Loblaw getting on board, labelling is about to become an even bigger issue. “People don’t know how much they’re eating,” Lieberman says. “When you see a big six-ounce muffin wrapped up at the store, that’s really three portions,” she says. “But it’s wrapped up as a single item, and people don’t realize unless they read the label very closely.”