The blanket that hugs insomniacs to sleep

Suffering from a sleep disorder? Try this blanket on for size. 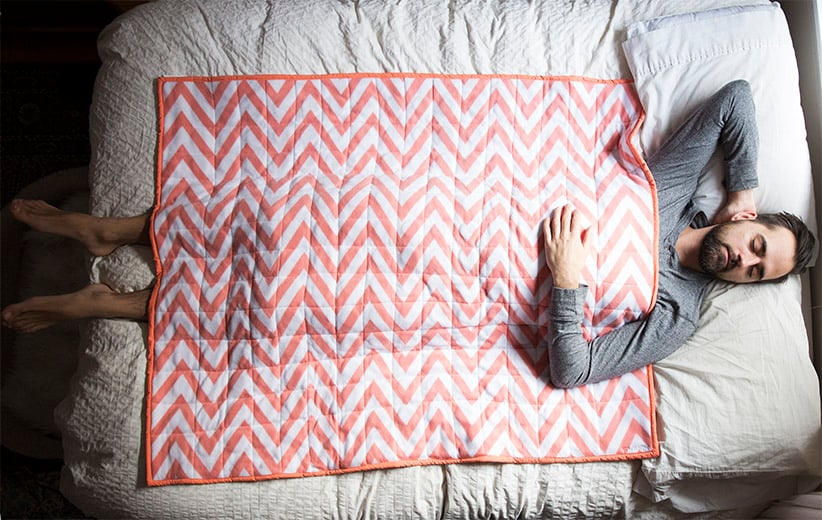 Sleeping with a weighted blanket. This blanket is made by Hippo Hug, a Calgary-based company. (Photograph by Kayla Chobotiuk)

It’s a paradox of modern life that just as we’re understanding the vital role sleep plays in health, happiness and disease prevention, sleep deprivation is on the rise. So is Big Sleep, the thriving industry devoted to sleep therapy, “sleep-aid” drugs dispensed to adults and children alike, and sleep research like the 2011 Université Laval study that revealed some 40 percent of Canadians are afflicted by sleep disorders. The fact sleeplessness can cause depression, metabolic and cardiovascular disorders and accidents, to name only a few risks, has given us yet another thing to lose sleep over.

The quest for nocturnal solace has even given rise to the mainstreaming of a tool used for decades by psychiatrists and occupational therapists to calm people with mania, psychosis, paranoia, autism and PTSD: the “weighted blanket” whose pressure quells anxiety by releasing serotonin, a neurotransmitter that creates a feeling of calm and converts to melatonin, a hormone that helps regulate sleep. Deep pressure touch can calm even bovine cows, as Temple Grandin showed when she developed chutes for more humane livestock handling. The activist and professor of animal science also developed a “hug box” and endorsed use of weighted blankets for children on the autism spectrum.

And it is precisely that soothing “hug” sensation that a spate of online companies are selling. “The Best Hug Ever” is the motto used by Surprise, Ariz.-based Weighted Blankets Plus. Hippo Hug, a Calgary-based company founded in 2011, also sells weighted pads to counter workaday stress; where many blankets are filled with plastic pellets, owner Leslie Brooks sews weighted disks between two layers of batting. Franklin, Tenn.-based Weighting Comforts likens the response to “the relaxing feeling” of wearing a lead apron for dental X-rays. Donna Dunham, a former family therapist, founded the company last year after seeing how heavy blankets soothed anxious clients. “At first, I couldn’t keep up with orders,” she says. Occupational therapist Cary Brown, a professor at the University of Alberta who researches sleep disorders in children and people with dementia, cautions that weighted blankets aren’t for everyone. “They’re not something I typically recommend,” he told Maclean’s in an email, noting controversy exists over their use by people with a health condition who can’t control movements fully, such as children and people with dementia or cerebral palsy. Overheating is another concern, she says, citing a 2008 study that found insomnia associated “with nocturnally elevated core body temperature.” Dunham disagrees; she routinely sells to menopausal women. Loose guidelines exist: the blankets shouldn’t be used by children under two; after that, a formula of 10 percent of body weight plus one pound applies.

Sleep therapists are on board with the use of the blankets in healthy adults and children. “It’s preferrable to medication,” says Alanna McGinn, founder of Burlington, Ont.-based GoodnightSleepSite.com. “It’s like deep tissue massage.” She sees the coblanket as part of a “sleep tool kit” that also includes regular sleep habits and eliminating electronics from the boudoir.

Research into the blanket’s benefits for insomnia is scant but emerging. A 2015 Swedish study found participants had “a calmer night’s sleep” and “believed that using the blanket provided them with a more comfortable, better quality, and more secure sleep.”

It concludes the blankets “may provide an innovative, nonpharmacological approach and complementary tool to improve sleep quality.” How innovative these cozy sleep-aids are is up for debate, of course, given that they represent a return to bedding trends of yore, before heavy wool blankets and quilts were usurped by feathery duvets. McGinn, “a relatively good sleeper,” reports her sleep was disrupted recently after buying a new duvet cover. “It didn’t have enough weight to it,” she says. And with weight, comes comfort — a sort of solitary hug, which in this sleepless era is better then none.