The 'caremongers' getting food and essentials to the country's most vulnerable 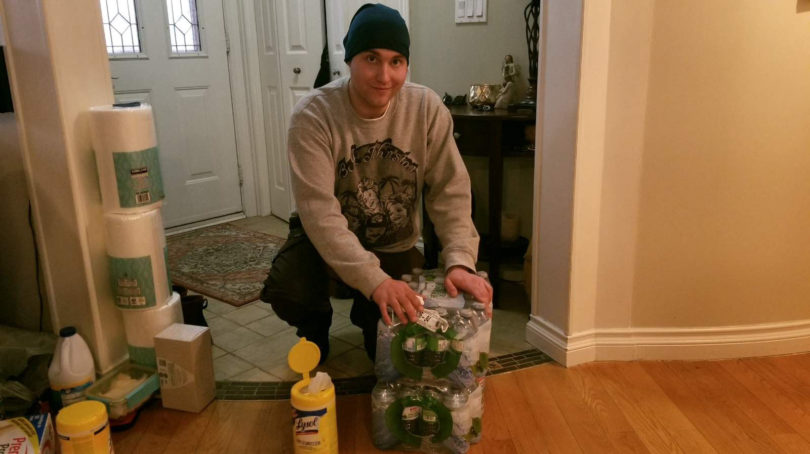 Simmons, with some supplies destined for people who can't get out to shop (Zachary Simmons)

At the sound of the buzz, Zachary Simmons walks into the lobby of a downtown apartment building in Oshawa, Ont., on his way to gather a couple bags full of supplies as part of his newfound pass-time. It’s a Tuesday night in the hushed streets of Durham Region, and he’s heading to the second floor to meet a fellow volunteer—another “caremonger” in the grassroots effort to bring food and necessities to the isolated and quarantined.

Jeff Jones is standing at the apartment threshold to greet Simmons—the two have never met—and he pauses as the door fails to fully shut behind his visitor. “Could you just give that a push behind you?” he says. “Just uh, I have a thing about the door being opened.”

Behind Jones, on a reclining chair, is a stack of food and household items that speak to his preoccupation with events unfolding in the world outside—paper towels, toilet paper, jars of peanut butter. A self-described “retired hermit with a lot of time on his hands,” he has set them aside for Simmons to deliver to those in need. About 18 months ago, he shut down his family-owned insurance business and has been keeping a few leftover supplies in a closet, where he has now retreated, calling out to Simmons.

“Was there anything else you needed?”

The answer is no, but Jones nevertheless returns with a package of chicken-noodle soup—a dish, he admits, he’s indifferent towards.

Simmons, 33, is one of a small army of volunteers offering their time and going out of pocket to deliver living essentials to vulnerable people shut in by the COVID-19 outbreak. What began as a Facebook group in Toronto called Caremongering-TO has inspired a 1-877 hotline in Durham, the heavily populated region east of Toronto, and a network of Good Samaritans looking to donate whatever they can to whoever needs it. There’s Stephanie Brown, a law student at York University’s Osgoode Hall, and Gail Bott, an electrician in Oshawa, among about 100 other volunteers. And Simmons.

Tonight, he’s on a supply run for a woman who needs distilled water for her CPAP machine, a device for people with sleep apnea, among other items.

In Oshawa, Simmons says, he and other volunteers frequently hear from people on Ontario Disability Support Program, who, as a global pandemic unfolds, have been forced to choose between buying hand sanitizer and food.

“I don’t know if the trust in our service is there; it’s just a need, and we’re doing our best to meet it,” Simmons says, driving past the old General Motors plant that shut down in December. “Disruption is coming, it doesn’t have to be suffering, though.”

RELATED: A plea to philanthropists—double the value of your grants to local non-profits

As he pulls through the parking lot, the recipient is standing at the back door of her apartment. He leaves the bags full of bottled water, peanut butter and paper towels against the brick wall for her to pick up; avoiding contact is essential. There’s a note with every drop-off that instructs the users to wipe down the materials, to be sure there aren’t any joyriding viruses. He tells her to stay in touch and starts his car up again. It’s closing in on 9:00 p.m., and it’s Simmons’s last drop-off of the night.

Amid the anxiety of COVID-19, similar networks of volunteers are coming together across Canada via branches of the “Caremongering” groups on Facebook. Although there is no direct affiliation between the groups besides the name, they are for people to access resources and verified information about the coronavirus.

The silver lining of these groups is unification, and a sense of mission to protect the precarious livelihoods of groups who were marginalized long before coronavirus came along. Ghee Chopra, one of the administrators of the Caremongering-TO group, wrote on the site “that the state has failed marginalized communities for centuries, trapping many of us in cycles of poverty and death.”

Amber Tucker, administrator of the Halifax chapter of the group, says her organization was inspired by Caremongering-Toronto.” She started it March 13, and it’s nearing 10,000 members. “It’s kind of just a grassroots effort for people to be able to share those resources.”

“I really felt it was important that we as a community are mobilizing and connecting with each other in order to meet the needs of folks who are more vulnerable,” she said. “Top of mind right now is staying safe.”

Dorothy McFarlane, 54, reached out to the Oshawa caremongers on behalf of a neighbour who—confined to her house due to underlying health issues—couldn’t go outside to get groceries. She got a handful of responses within the half-hour. The service, McFarlane enthused, “is extremely important, especially when people can’t get out at all. She was so blessed, I tell ya.”

For Simmons, dressed in a large, green rain jacket, with a blue headband and hand sanitizer strapped to the belt loops of his jeans, the question of solidarity in precarious times is simple: “Black, white, Republican, Democrat, NDP, conservative, liberal: everybody has the same f—king upper respiratory tract.”