The debate about safe-injection sites

Toronto is talking drugs again, but this time it’s not about their mayor’s recreational habits.

The city’s medical officer of health, Dr. David McKeown, is calling for the development of a safe injection site for illegal drug users. The Toronto Board of Health will discuss the recommendation on July 10 and if approved, the measure will move forward for consideration by city council.

With tomes of academic literature extolling the health and safety benefits of harm reduction facilities (including a reduced number of overdose deaths, greater prevention of HIV, and cost savings), for many the establishment of safe injection site is a no-brainer. For others, though, the thought of assisting addicts and encouraging illegal activity is a significant moral offence.

So where will the issue land? Prepare for the diversity of views on July 10 with our stakeholders reference sheet.

[UPDATE] Wednesday afternoon, Toronto’s Board of Health approved the report recommending supervised injection sites in the city, becoming the first governing body in Ontario to throw support behind the facilities. The report will now go to Toronto City Council for final approval. 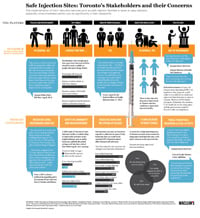 Links to sources used in the above graphic:

“Police Perceptions of Supervised Consumption Sites (SCSs): A qualitative Study” (from Substance Use and Misuse, 2012)

“Summary of Findings from the Evaluation of a Pilot Medically Supervised Safer Injecting Facility” (from Canadian Medical Association Journal, 2006)

“Injection Drug Users’ Perceptions Regarding Use of a Medically Supervised Safer Injecting Facility” (from Addictive Behaviors, 2007)

“Report of the Toronto and Ottawa Supervised Consumption Assessment Study, 2012” (from the University of Toronto Dalla Lana School of Public Health, 2012)