The fragile confidence of coronavirus survivors

Recovery from COVID-19 can be riddled with loneliness, grief and confusion about whether they're immune for life 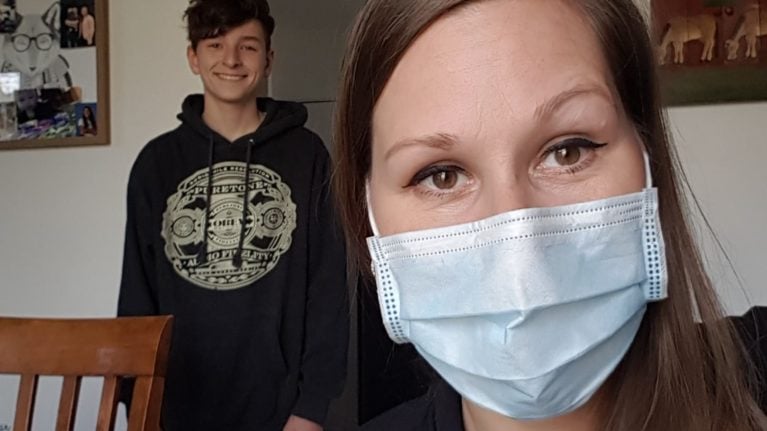 Angela Campeau has not hugged her three children in five weeks. She spends most of her days cross-stitching at home, watching Netflix or keeping up with the news to pass the time. She always wears a surgical mask, tucked tightly on her face, even when she plays with the family dog.

Campeau, a licensed practical nurse in Montreal, feels perfectly fine. But her ongoing tests for COVID-19 continue to come up positive more than four weeks after she was infected.

Campeau contracted the virus while working at Vigi Dollard-des-Ormeaux, a long-term care centre for seniors in Quebec, as an outbreak was unfolding inside. She’d been working at the facility for seven years before the pandemic. Now, her only window into goings on there are headlines referring to the numbers of infected staff and the appalling fates of the facility’s residents. More than 60 have died since Campeau went into quarantine.

The sense of helplessness has left her almost as exhausted as the illness, itself: “The worst thing out of all of this is not being able to go back to work,” she says, adding: “I was feeding these people, and now they’re gone.”

RELATED: Should our lives be centred around our neighbourhoods post-coronavirus?

The recovery journey of those infected with coronavirus can be long, lonely and riddled with grief or confusion. What’s more, overcoming a severe case of COVID-19 can come with surprisingly little relief. The lived experiences of survivors interviewed by Maclean’s runs contrary to the widespread idea that recovery confers a psychological shield against the effects and anxieties surrounding the virus—or, for that matter, permanent immunity. Relatively little is known yet about the novel coronavirus, and as provinces from coast to coast kick their reopening plans into gear, there’s a surprising level of concern among those who’ve had it.

For those with milder cases, COVID-19 can come in the form of a mere 36-hour puzzling loss of taste and smell. For others, like Campeau, it felt like being “hit by a train and dragged down the tracks.” On both ends of the spectrum—and even after symptoms subside—confusion remains about what being fully recovered actually means. When is the appropriate time to hug loved ones again or step outside to get groceries? What lasting effects, if any, does the virus have on the body?

Campeau, a health-care worker, is one of the luckier COVID-19 patients in Quebec: she’s had access to frequent tests to determine whether she still carries the virus, as health-care workers need two negative tests to resume their duties. Others, like Allan Drakes, a Montreal DJ who mostly works from home, was denied a retest because they were initially reserved for health-care workers and vulnerable populations; he was told instead to wait the customary 14-day period or until his symptoms had subsided to be considered infection-free. “I was a little shocked by that,” he says.

Drakes experienced only mild symptoms for less than 48 hours. His partner Melanie Fournier—a health-care worker—was less fortunate. Along with severe symptoms, she endured 35 days in quarantine and seven tests before she was officially declared free of coronavirus—a far cry from that notional 14-day time frame. Knowing this, Drakes opted for caution, waiting a full five weeks before even holding his six-month old baby again.

RELATED: Footprints of the coronavirus: How it came to Canada and went around the world

“It’s not me that I’m worried about,” says Drakes, who to the best of his knowledge has since fully recovered. Instead, he worries about others who feel fine after the customary 14 days, but may still be carrying the virus and return to normal life to unknowingly infect people.

Fournier shares similar fears, but her negative test result brought a definitive sense of relief and confidence—at least initially. It was a welcome shift after her lonely weeks in isolation and the severe symptoms she suffered for 10 days, including fatigue and a persistent fever, which left her feeling genuinely afraid for her life. “I almost don’t believe it,” she says of her recovery.

But for many, that much-anticipated release is followed by residual fears and misgivings. In B.C., Kyla Lee was one of the first to be diagnosed with COVID-19. Having just returned from the U.S. with a fever, a cough, shortness of breath and loss of taste and smell, Lee was told by a doctor via video chat that she was a presumptive case of COVID. She was advised to isolate for 14 days or until symptoms disappear. She was never tested.

The days spent alone at home dragged on. Lee’s fever and cough gradually got worse before they got better. Her sense of taste and smell all but disappeared. “I would just cover things in garlic because that’s the only thing I could taste,” she says.

A month after her infection, Lee’s symptoms have subsided and she assumes she is coronavirus-free. This has brought on a yo-yo of emotions. On one hand, Lee acknowledges that she sometimes feels invulnerable. “No one can touch me,” she says half-heartedly. But she can’t escape the sense of being a carrier of the virus, and she’s worried by reports of people testing positive for COVID-19 again after recovering.

“There’s still a fear in the back of my mind about exposing other people or reacquiring the infection one way or another,” she says. “It’s totally like, ‘Yeah I’m invincible,’ to ‘Oh no, I could be a ticking time bomb.’”

RELATED: The B.C. town that ‘MacGyvered’ its way into being ready for COVID-19

Experts have since tried to address why some data, mainly from South Korea where testing is widely available, have showed the possibility of testing positive after recovery. Dr. Ilan Schwartz, an infectious disease specialist at the University of Alberta, says there have been no accounts of symptoms returning after recovery, and these tests are likely detecting old genetic material of the virus. “These tests are imperfect,” he says.

Schwartz adds there is no evidence the virus can remain dormant in the body and reactivate later on. He also says the possibility of transmitting the virus has proven to be higher at the beginning of infection, and there is no indication people can infect others outside the 14-day window if their symptoms have subsided, barring a persistent cough that is customary to respiratory viral infections. He does advise those who have been infected to wear masks outside, however, even after the 14 days.

“Once you’ve gotten infected and you’ve gotten better, you are cured of that infection,” he reassures. Although he admits there have been reports that may confuse survivors, including one from the World Health Organization that suggests there’s no evidence recovery equals immunity. But Schwartz believes the absence of evidence is not enough to go by, and testing on animals suggests there is no risk of reinfection. The organization has since walked back its statement, he notes.

Aside from confusion on the virus itself, reintegration into the world after weeks of quarantine has been akin to “culture shock,” Lee says. When venturing outside for the first time in weeks to retrieve her dog’s heart medication, she was met with a veterinarian’s office on partial lockdown, the front door blocked by furniture. A debit machine was placed for her on a table to pay, while the receptionist helping her stood at the opposite end of the room.

“The way that people interact with each other is so different from the last time I was out of my house,” she says. “It really freaked me out.”

She also worries about possible long-term effects of infection. In Italy, there have been reports of debilitating symptoms that linger after a person has gotten rid of the virus. Lee herself has experienced shortness of breath when performing mundane tasks, like washing the kitchen floor or taking her dog out for a walk. “I’m not in great shape,” she jokes, “but before I could do those things without getting out of breath.”

RELATED: Lessons from Kronavirus: Is Sweden’s anti-lockdown approach more strategic than it seems?

So for survivors, comfort seems to lie beyond recovery, and only clarity from research on those who survive COVID-19 may ease that anxiety. Experts acknowledge they’ve barely scratched the surface when it comes to understanding the virus—who it might weaken and for how long; whether there is risk of reinfection from a future mutation.

Despite the uncertainty, provinces are moving ahead with reopening plans. Quebec, the epicentre of the pandemic in Canada with more than 38,000 infections, reopened schools for thousands outside of Montreal on Monday. In B.C., where the infection-rate curve flattened encouragingly, restaurants and hair salons will be allowed to open in mid-May, with social distancing measures still in place. Alberta and Ontario will operate on similar timelines.

These plans have added another layer of worry for Campeau, who on Tuesday finally received her first negative test some 33 days after becoming infected. She is relieved, but remains worried— less for herself than for others sure to come face-to-face with the disease in the coming weeks and months, with no surefire treatment or vaccine. It’s important to restart the economy, she adds, “but at what cost?”

For now, Campeau does her best to live life in quarantine as she awaits her second negative test, trying not to eat too much and always maintaining a two-metre distance from her 14-year-old and 20-year-old sons who live with her at home. The passage of time has been evident by the change from snowy days to sunny skies. Moments of brightness consist of a few hours spent in the backyard, or a wave across the street from her oldest, 23-year-old son, who comes to visit now and again.

And for all the lingering fear, she’s eager to go back to work, even suggesting being put in a COVID-19 positive unit of the care facility, where she can aide those who most at risk of dying. “I have no idea what I’m going back into,” she says. “I just want to be able to go in and help.”