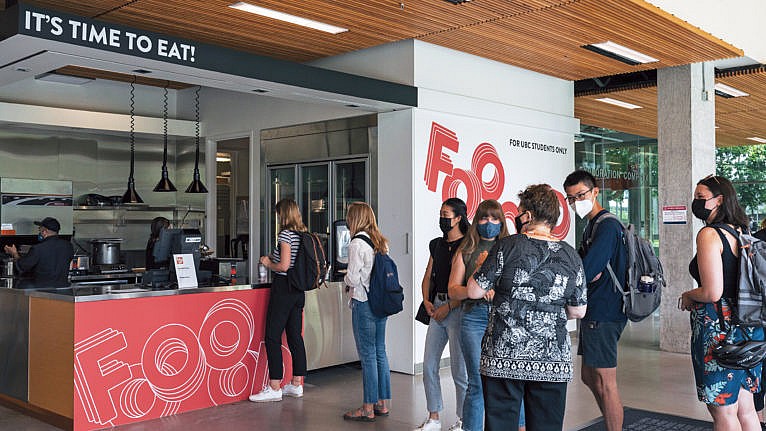 The student association at the University of Guelph recognizes that students often have to make very difficult financial choices and are forced to compromise on both quality and quantity. In response, the association set up a campus food bank, which, for approximately 200 students, is a temporary solution to that problem.

Guelph’s campus food bank is run by ​a full-time paid coordinator who has support from student volunteers. The food bank operates under a pantry model, so students may choose the foods they want instead of being prescribed what foods they can get. In addition to the food bank, students can help themselves to items at food pantries and food cupboards that are periodically stocked with complimentary food in various areas on campus, including the Aboriginal Resource Centre.

But as high rates of food insecurity remain steady among students, so has the demand for the food bank, which has seen an increase in visitors since the pandemic. “Like many other food banks on campuses across Canada, Guelph’s food bank is facing challenges, like placing limits on how much food students can take,” says Sam Laban, a facilitator at the Guelph Lab. “Most food banks, both on and off-campus, have always operated with limited resources. That’s not a new, pandemic-related thing.” 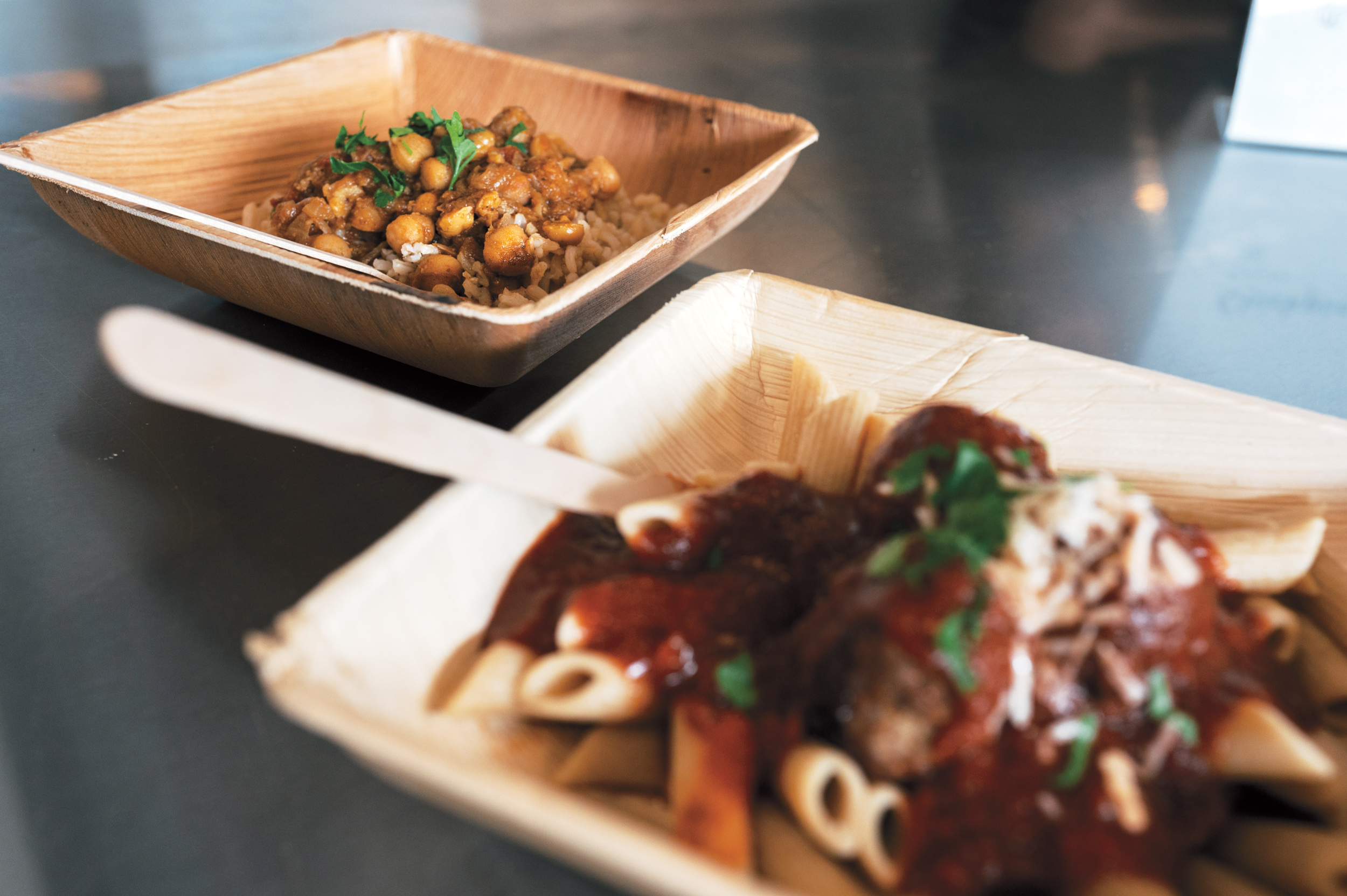 The University of British Columbia has long known food insecurity was a problem among its students and has invested in services to help those who have precarious finances. The main problem, explains Sara Kozicky, the university’s food security project manager, is that not every student knows that these programs exist.

One of the university’s new strategies to address this problem is a digital food hub website, which will launch in fall 2021 and connect students to all of the resources available on UBC’s campuses. “It’s a space where the community can build on the content and contribute to it, so all students know what’s available on campus,” said Kozicky.

READ: The sour taste of a soda tax in Newfoundland and Labrador

The digital hub will point students toward emergency support, financial aid, food resources and ways to take action to address systemic causes of food insecurity. The website will also lead students to some of the lower-cost food options available on campus, including Fooood, which offers subsidized homestyle meals for $3 a serving.

A decade ago, students at Dalhousie University were kicked off the campus by security when a student group distributed prepared meals on campus to students in need. The students were pushing back against an exclusive contract with the university’s catering company; the contract barred students from raising funds or selling food made by local businesses and restaurants. Soon afterwards, this act of student resistance materialized as the Loaded Ladle Co-op, which is now a levied student group funded through the student union.

“We use the levy money to buy vegetables from the farmer’s market and the Dalhousie Student Union Market. A lot of the dry goods we order are from Speerville, a flour mill in New Brunswick,” says Su Donovaro, the group’s organizing coordinator. “We try to purchase locally as much as we can and buy from farmers that we know have good working relations with their employees.”

MORE: COVID forced restaurants to face a choice: adapt or die. What changes will stick?

Equipping students with food literacy skills is at the core of the group’s mission. The Loaded Ladle Co-op holds a yearly conference that focuses on Indigenous food sovereignty and local food systems. The co-op also runs “solidarity servings” with student-run groups to encourage conversations about food and collective organizing.

The initiative with the greatest reach is the serving of weekly meals on Thursdays and Fridays during the school year. Volunteers cook 150 servings with recipes from various cultures and ingredients from local providers. Donovaro says some students will come for lunch and take a second portion to have for dinner at home. “Students shouldn’t have to be stressed about paying tuition and rent [instead of paying for] food in a given week. They tell us if they didn’t have the Ladle, they wouldn’t have eaten that day.” 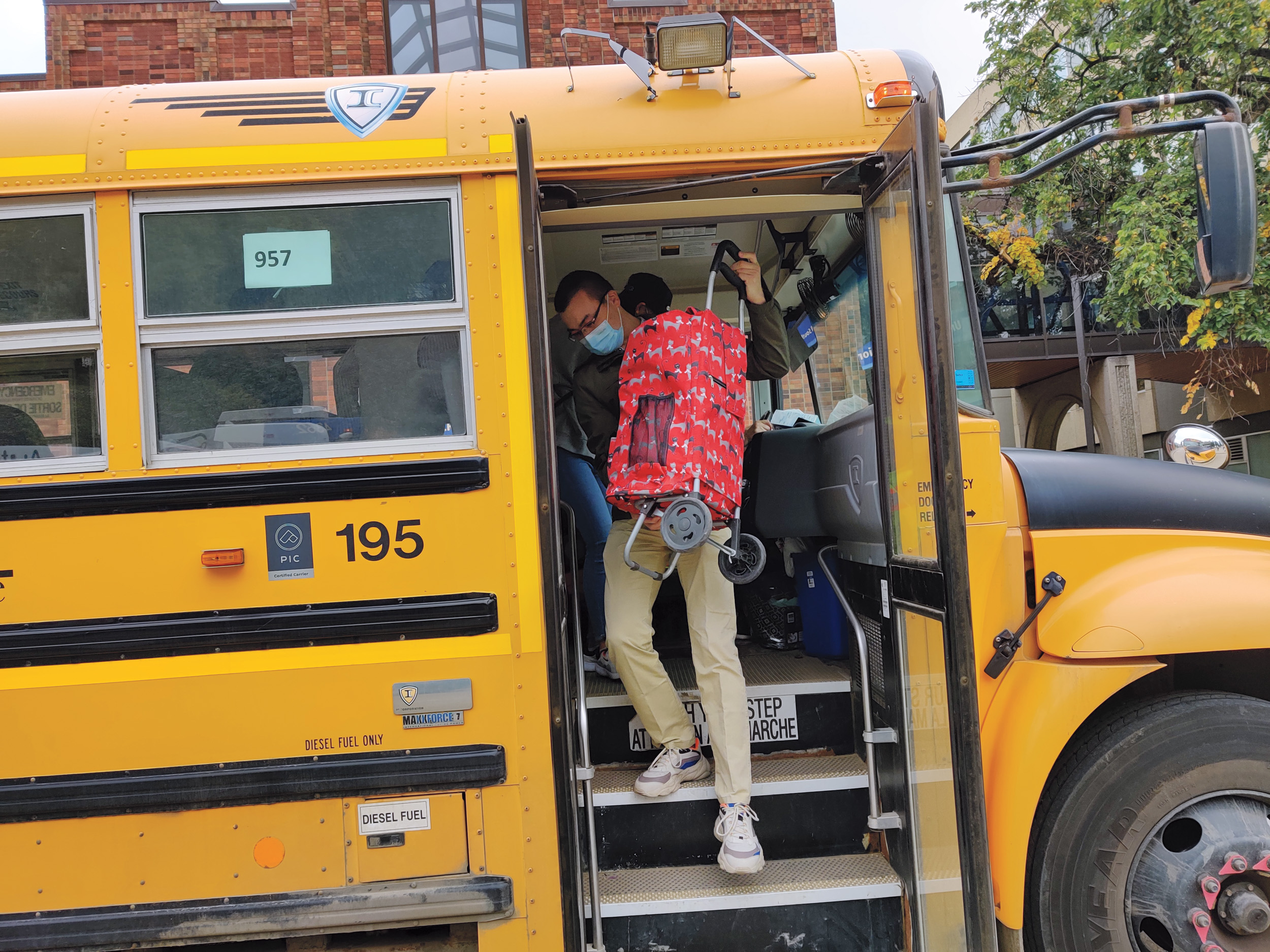 Commuting to and from grocery stores can be time-consuming for students at the University of Alberta in Edmonton, especially when the grocery stores closest to campus are known for high prices and lack of variety. The Campus Food Bank Society recognized this obstacle and began its weekly Grocery Buses program as a solution. Once a week, students can sign up in advance to meet a repurposed school bus at a central point on campus. The bus first stops at a large chain grocery store and then makes its way to several culturally relevant grocery stores that would otherwise be difficult to travel to and from by transit.

READ: What happens to sexual assault reports at Canadian universities? No one really knows.

“The bus stops at T&T, and there’s an H-Mart right beside that; [they are] two of the biggest Asian grocers,” says Cory Rianson, the organization’s executive director. “We also stop in an area where there is a collection of Southeast Asian and Indian [grocers], and there is also a halal butcher. So we are able to hit several major cultural diets or cultural grocers within that route.” The grocery bus program is popular among international students who live close to campus and who would otherwise have a hard time finding culturally appropriate food, Rianson says.

The Campus Food Bank Society was formed as a result of a student protest in 1991 after the university raised tuition for international students. A student association assembled to run a one-day emergency food hamper program. There was a huge demand. The Campus Food Bank Society eventually became a non-profit organization, and it continues to reach out to hundreds of students in need.

This article appears in print in the 2022 University Rankings issue of Maclean’s magazine with the headline, “Putting an end to the ‘starving student.’”