The gravity of Alberta's COVID crisis, in one phone call

Image of the Week: A doctor's call to tell a family their loved one had died captures the exhaustion, frustration and sorrow washing over the province 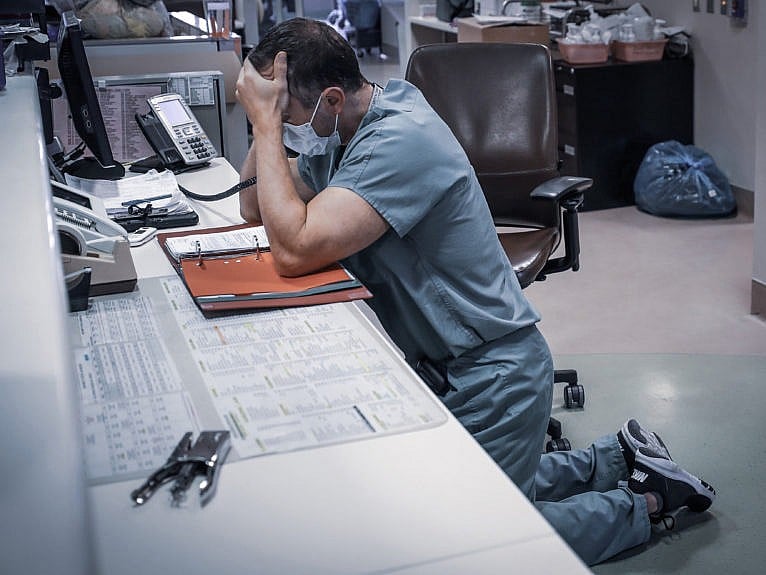 ICU physician Dr. Simon Demers-Marcil calls a family to tell them a loved one died of COVID-19. (Leah Hennel/@AHS_media/Twitter)

With COVID-19 having killed hundreds of Albertans, Dr. Simon Demers-Marcil has gotten used to delivering bad news over the phone. But that doesn’t make it easy. The ICU doctor was photographed at the Peter Lougheed Centre, a major hospital in Calgary, breaking the news of a loved one’s death to someone. As he acknowledged to CBC, he doesn’t know which family he was speaking to at the time, since it’s become a matter of routine. Alberta, like many other Canadian provinces and territories, continued to break records this past weekend, with more than 1,300 new cases recorded on Saturday, followed by more than 1,500 on Sunday. Premier Jason Kenney had withdrawn from the public eye for more than a week, sparking angry #WhereIsKenney posts to trend on social media. The province’s direction is lethal and distressing. More than any other premier, Kenney seems hell bent on keeping his residents’ personal freedoms and economic welfare intact. He governs a far bigger population than Saskatchewan and P.E.I., which have avoided lockdowns, and there is political resistance to shutting down the economies of the province’s most dense regions like Doug Ford did in Ontario. Yet it seems inevitable that Alberta will have to do something quickly. A lockdown must be on the horizon. As Demers-Marcil put it, “We need all the help we get.”

FILED UNDER: Alberta COVID-19 Editor's Picks Image of the week