The incalculable rise of hydroxychloroquine

Trump endorsing hydroxychloroquine to ward off COVID-19, offers a stark lesson in how science, social media, politics and global supply chains have collided during the coronavirus crisis 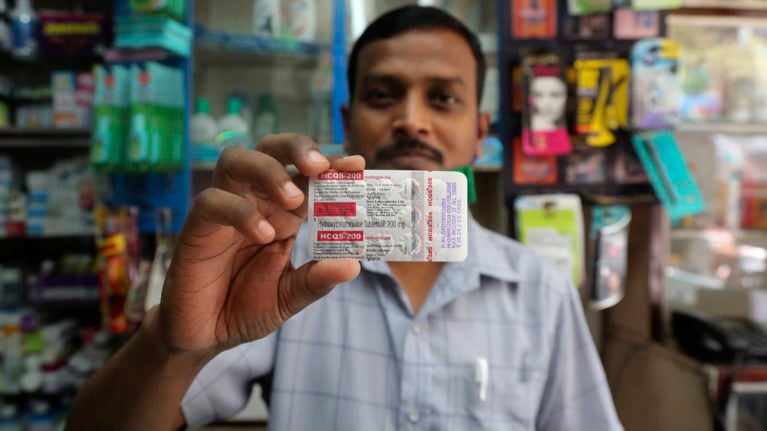 A chemist displays hydroxychloroquine tablets in Mumbai, India, on May 19, 2020. Trump's previous endorsement of hydroxychloroquine catalyzed a tremendous shift in the country, spurring the worlds largest producer of the drug to make much more of it. (Rafiq Maqbool/AP/CP)

In early April, Sonja Gill, rheumatologist based in Oakville, Ont., began to get shaky inquiries from some of the patients she treats who suffer from lupus or rheumatoid arthritis. They’d sought to fill routine prescriptions for hydroxychloroquine, an anti-malarial drug that quiets the symptoms of these two auto-immune conditions, but their pharmacists were saying they had none.

“We’ve had call after call,’’ says Gill, who estimates that 70 per cent of her 1,500-patient practice are on hydroxychloroquine. She asked her administrative assistant to beat the bushes with pharmacies and wholesalers to find supplies.

“If we don’t have it, [switching to another medication] is a tough decision,” Gill says. “The hard part has been telling patients what to do.”

There was little mystery as to the cause. For several weeks in early April, President Donald Trump and chorus of U.S. media were talking and posting ceaselessly about how hydroxychloroquine, a generic drug, could be the miracle cure for coronavirus, allegedly reducing the levels of the virus in infected patients and thus hastening recovery.

“They’re not blind,” Gill says of her patients. “All this stuff has been on TV since Trump tweeted about it.” All of a sudden, the drug joined the inauspicious list of commodities—toilet paper, Lysol wipes, flour, yeast, face masks and more—experiencing pandemic-related shortages. The upshot: Gill’s patients had become unwitting victims of Trump’s war on science.

The hydroxychloroquine saga, which quieted following reports of over-dose deaths but has lumbered back into view in recent days with Trump claiming he’s taking the drug to ward off COVID-19, offers a stark lesson in how science, social media, politics and global supply chains have collided unpredictably in this crisis.

When reports with preliminary findings about treatments and vaccines go viral, they don’t just stoke public expectations. The publicity sets off chain reactions that reverberate messily through regulatory agencies, doctors’ offices, and even within drug companies that are, in some cases, forced to scramble to meet surging demand.

What’s more, the hydroxychloroquine-coronavirus tale is by no means over. Some experts have strongly opposed the use of hydroxychloroquine, including Richard Bright, a doctor leading the U.S. federal Biomedical Advanced Research and Development Authority, who was ousted by Trump for his outspokenness. On May 22, peer-reviewed medical journal The Lancet published a study that looked at how 15,000 COVID-19 patients in almost 700 hospitals responded to various permutations of hydroxychloroquine and antibiotics. The key takeaway: patients exhibited a heightened risk of heart arrhythmia suggesting that these treatments “are not useful and could be harmful in hospitalized patients with COVID-19.”

Despite the mounting evidence, a significant amount of clinical research into the drug’s safety and efficacy is now underway, via international randomized control trials whose investigators include doctors at teaching hospitals in Ontario, Nova Scotia, Manitoba and Alberta, and hundreds of Canadian COVID-19 patients are or will be participating. If these long-term studies support the use of hydroxychloroquine, the Canadian market could face a period of jarring upheavals and shortages.

Unlike the U.S. Food and Drug Administration, Health Canada hasn’t permitted physicians to administer hydroxychloroquine, either alone or with antibiotics, to relieve COVID-19 symptoms. But medical interest in the drug was circulating before the president waded into the fray. Researchers like Kevin Kain, MD and a Canada Research Chair in infectious diseases at Toronto’s University Health Network, had for several years been aware of lab research demonstrating the anti-viral properties of one of the active ingredients in hydroxychloroquine.

In early March, he joined an international team to set up a “double blind, placebo controlled” randomized clinical trial (the gold standard), to examine the potential of using the drug preventatively for frontline health care workers. “This was all way before Trump  poisoned the waters with misinformation and the release of one very poor quality ‘study’ from France,” Kain says.

The French study, published online in the International Journal of Anti-microbial Agents  involved 42 patients and was later tweeted by Trump. Of those treated with the drug, the précis claims they showed a “significant reduction” in infection, although the comments at the end concede the results are “preliminary.” (The New York Times recently published a hard-hitting profile of the lead investigator, a charismatic microbiologist named Didier Raoult, questioning his earlier research.)

MORE: Coronavirus in Canada: how to get tested, what the symptoms are, where to get help

One doesn’t need to have a PhD to know that such small samples don’t produce definitive results. Medical ethicist Sunit Das, an associate professor at the University of Toronto’s Centre for Ethics, notes that the French paper says it is a case study using “level–three evidence,” a term all medical researchers understand. “This is not the sort of evidence that should drive clinical treatment,” says Das.

Kain, however, goes much further, dismissing the French paper as “shoddy work that shouldn’t have been published.” (Das disagrees.) But the fact is that it was published online, on journal sites without paywalls, meaning these findings were available to anyone. Research from the Journal of the American Medical Association, which analyzes internet searches of hydroxychloroquine, shows that the release of the French study coincided with the steep slope that begins with a tweet by Elon Musk and crests in mid-March with Trump’s endorsement.

Another pair of small-ish studies, one done in Brazil, the other in several veterans’ hospitals in the U.S., concludes the opposite: that hydroxychloroquine is either ineffective or unsafe. Kain says these findings—one based on 81 cases and the other on 368 patients—fuelled a backlash. They informed disparaging comments made by Richard Bright, the ousted U.S. official. (A larger study of 1,466 people admitted to ER with COVID-19 and published in early May in the New England Journal of Medicine was inconclusive.)

Some of these studies looked at high-dose treatments, and one wasn’t even peer-reviewed before it went online. Almost any drug, consumed in large amounts, can be toxic, Kain says. He also stresses that his goal as a scientist isn’t to prove that hydroxychloroquine is a miracle treatment, but rather to answer the question about its efficacy definitely and rigorously.

While Health Canada is allowing anyone being treated in a hospital for COVID-19 to participate one of the many clinical trials now underway, researchers in both Canada and the U.S. say it’s been difficult recruiting participants because of sensational media reports about people dying after ingesting high doses of hydroxychloroquine. While the drug does have heart, kidney and liver side effects, Kain points out that physicians have been using it safely for 70 years, so it’s not difficult for researchers to structure trials to ensure proper doses.

In late March, Mint Pharmaceuticals, a Mississauga, Ont.-based generic drug manufacturer that distributes about 60 per cent of all hydroxychloroquine used in Canada, received two very large orders from a wholesaler that provides pharmaceuticals to hospitals. The orders, equivalent to all the hydroxychloroquine used in Canada in 2019, set off alarm bells.

Just days before, the U.S. Food and Drug Administration made the contentious and subsequently criticized decision to allow physicians to use hydroxychloroquine, in conjunction with an antibiotic, to treat COVID-19.

Federal officials in Ottawa began monitoring the situation and conferring with Canadian suppliers in weekly “stakeholder” calls. No one at the time understood why Canadian hospitals would be stockpiling, but the huge orders raised the prospect that “legacy” patients (those with lupus or rheumatoid arthritis) may not be able to fill prescriptions.

According to Mint CEO Jaiveer Singh, the fast-growing firm has been making and distributing hydroxychloroquine in Canada since 2014, generating about $7 million on the drug in 2019. Mint’s not the only generic firm distributing it in Canada, but the competition in recent years has narrowed. Some global players have abandoned the product in Canada because the going price—set by provincial drug formularies—has fallen, and is now well below what hydroxychloroquine costs in the U.S.

By late March, Singh warned Health Canada officials that those large hospital orders could quickly soak up pharmacy supply normally used to fill prescriptions for patients with lupus and rheumatoid arthritis. “We were really concerned,” Singh says. He urged the government to place a large emergency order to ensure there was enough to go around. “The federal government at that point,” he says, “took more of a cautious approach. They didn’t want to increase the stockpile.”

That’s when the supply chain issues began to loom large. Thanks to the pandemic, the costs of the active ingredient in the drug and shipping had all jumped while the Canadian dollar was plunging. Singh says he worries about continuing to supply the Canadian market if the company costs exceed the prices set by the provinces.

Mint’s manufacturing partner for hydroxychloroquine is a large producer in India, which, as Singh says, has become the world’s pharmacy. As global demand for the drug surged (on the wave of Trump’s tweets), and the pandemic took hold in India, Prime Minister Narendra Modi’s government closed the border to pharmaceutical exports, disrupting international supply chains.

After Ottawa had finally agreed to increase Canada’s emergency storehouse for legacy patients in mid-April, Singh, senior government officials and the Indian consulate in Toronto began hustling to secure a five-million-tablet shipment from Mint’s Indian supplier, to be exempted from the export ban on humanitarian grounds. The drugs arrived in Mint’s Mississauga warehouse in early May and are being stored in a cage monitored around the clock by closed-circuit cameras.

And what about those big hospital orders Mint had to fill? Some of those tablets will likely be used in the clinical trials now underway across Canada. But we won’t know the results until later in the year, at the earliest. If they prove this venerable malaria drug does treat COVID-19, Singh says Mint will ramp up production to serve the Canadian market. But the inevitable scramble will bring other difficult choices: who should get first crack at the drug: COVID-19 sufferers or the lupus and arthritis patients who would have to take stronger alternatives?

Beyond the particulars of the hydroxychloroquine tale, this episode raises—or re-visits—broader ethical questions about the rapid dissemination of half-baked research to a hyper-connected world that can’t wait to rid itself of this virus.

Stories about other premature findings—the latest being news reports that Moderna Inc., a publicly-traded $26 billion-a-year biotech giant, had encouraging results for eight healthy people injected with a trial vaccine—continue to find their way out of the normally staid scientific literature ecosystem and into the hurricane that is social media.

This dynamic has prompted concern to ripple through the highest echelons of the medical research establishment. “The pandemic will inevitably leave considerable morbidity, mortality, and loss in its wake,” the New England Journal of Medicine opined. “Damage to the country’s medication-assessment process—and the public’s respect for it—should not be part of its legacy.”

In the meantime, rheumatologist Sonja Gill is just hoping that her patients won’t have to face yet another round of unnerving shortages triggered by the viral spread of research results that have yet to be exposed to proper scientific scrutiny.