How video games can heal

Researcher and digital game designer Jane McGonigal on the underrated value of video games as a source of power, grit and healing 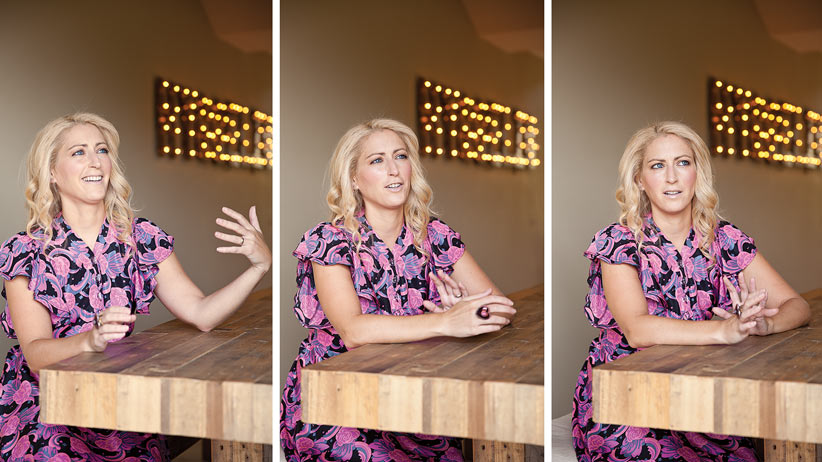 Jane McGonigal photographed in her home in Berkeley, California, on August 20, 2015. (Photograph by Margo Moritz)

After a year of pain, depression and even suicidal thoughts following a traumatic concussion, Jane McGonigal decided to use her skills as a California-based digital game designer to aid her recovery. Her game of “power-ups,” quests and bad guys proved so effective, she created the digital version, SuperBetter, a therapeutic and research tool played by almost 500,000 people. Her 2015 book of the same name explains the science behind the health, motivational and social benefits of video gaming.

Q: What started your fascination with games?

A: Some of my earliest memories were playing video games with my dad and my sister. We got a computer in 1986. By age 10, I was programming my own games. It wasn’t until I started my Ph.D. program at Berkeley that I got into the research side. I saw a lot of people playing games, and it seemed to be changing how they were thinking and acting in real life. People were studying it from the negative side: Will it make people aggressive? Nobody was studying this other category of things that seemed to be happening, about wanting to tackle real-life problems.

Q: Let’s look at SuperBetter, the game, and the book’s advocacy for video gaming in general. The subtitle alone, “A revolutionary approach to getting stronger, happier, braver and more resilient” must create skepticism.

A: Yes. However, I only included possibilities that we tested and found in our randomized control study and clinical trials, so those are some strong words I can confidently stand behind. So much evidence and so much research is piling up. Neuroscientists, psychologists, medical researchers are looking at this. On the other hand, there’s lots of skepticism that’s deserved. We look at brain-training games, and neuroscientists who have studied them found they don’t do the things they’re claimed to do. Tetris really can help you prevent PTSD (post-traumatic stress disorder), but a brain-training game is not going to help you remember where you left your keys.

Q: SuperBetter sprang from your desire to use your game-design skills to fight your own concussion, and the lingering pain, fog and depression that followed. How did it work?

A: I wanted to give myself a way to focus on my strengths. I became Jane the Concussion Slayer, so I could feel like a vampire slayer. The headaches and the memory loss were my demons and vampires. I invited allies to play with me. I called my sister and friends. I found it easier to invite them to play and say, “I’m playing a game to heal my brain and I want you to play with me,” instead of saying, “I’m miserable, I’m scared, it’s worse than I thought it would be.” Those are hard things to say. I asked my allies to help me find power-ups, things that would make me feel stronger or happier, things like cuddling my dog for 10 minutes. That was the start, bringing this gameful mindset of recruiting allies, focusing on strengths with the secret identity, using power-ups to get stronger, confronting the bad guys rather than hiding from them.

Q: That remains the core of SuperBetter?

A: It remains the core. We’ve tested it with just under half a million players. It’s been refined, focusing on naming your challenge in a way that helps you adapt a gameful mindset—something as simple as saying I’m getting super-better at something, rather than from something. When you play chess, you don’t say, “I’m here to prevent my pieces from getting wiped out.” You think, “I’m here to capture the king.”

Q: What is the response from players?

A: That has been the biggest epic win for me. Every day, I hear from somebody who has been using this game for something so much harder than I faced. On the face of it, it sounds ridiculous: How could something as trivial as adopting a secret identity and going after power-ups help in life-and-death situations? That was my quest in getting this book together; I’ve got to understand the science.Otherwise, who will believe this?

Q: You’ll be considered St. Jane in the gaming community. Saviours like you have been excoriated for years.

A: I do mention in the book that there are problematic ways to play. We know that if you’re playing more than 21 hours a week, you’re actually likely to have some negative impacts on your physical health or your social or mental health. I don’t want to be a saint; I just want to help people.

Q: You also found it’s bad to try to beat strangers online with aggressive-themed games. So, it’s much better to shoot up your loved ones?

A: [They become] overly aggressive, with less empathy toward other people, and that did spill over into behaviour outside of the game. It’s fine to beat friends and family in Call of Duty, but people do get in trouble, particularly if they lose a lot to strangers online.

Q: Your book notes that more than a billion people play digital games at least an hour a day. That’s a billion hours a day that’s either of enormous potential, or a lot of wasted time.

A: It could be wasted if the people playing aren’t able to make that connection in their everyday lives between the psychological strengths and resiliency-building in games. In addition to their enjoyment, they can also be developing important strengths, such as determination, perseverance and the ability to understand people better. If people don’t realize these are transferable skills, they won’t use them.

Q: You make a lighthearted reference to doctors prescribing Angry Birds. Are you serious about the therapeutic value of digital games?

A: Totally serious. I just heard from an ER trauma doctor in Hamilton. He was telling me he picked up one of the tips from the book to prevent flashbacks. He started using Tetris after seeing horrible things in the ER, after working with traumatic injuries and tragic cases. He would use Tetris to prevent burnout. It’s working so well for him, he’s now teaching the entire ER trauma unit this practical skill. In the case of our clinical trial, the doctors prescribed SuperBetter to concussion and traumatic-brain-injury patients. The doctors were able to prescribe specific power-ups and bad guys and quests to the patients, based on where they were in their recovery. [Not only would the doctors] prescribe a game; they might actually play the game with you.

Q: Games can be more effective than morphine. Describe what SnowWorld (a shooter game with snowballs) does for burn patients.

A: This game was created at the University of Washington for the most serious burn victims to play while their wounds are being cleaned. They reported not thinking consciously about the pain from their procedure. They were able to focus their attention in this virtual world. It allowed patients to deprive their brains’ pain centres of blood flow. If you are so absorbed in this video game, all the blood is flowing to other areas of the brain, such as the visual processing centre. Even though your body may be in physical pain, if you play the video game, your brain is not aware of that. Games are such a powerful intervention in health and wellness.

Q: Re-Mission is a game for young cancer patients to motivate them to continue their long, difficult treatments. How does it work?

A: Most young patients have to undergo years of oral chemotherapy at home. It feels like this thing they’re forced to do; they certainly don’t feel powerful. Most kids miss doses, and the doctors know this leads to more cases of the cancer coming back. This video game hijacks the brain into feeling optimistic and powerful. You’re firing the chemotherapy weapons and you’re trying to navigate through this maze inside the body. It’s all things games do well; they give you goals. As the levels get harder, you’re getting better. They were able to transfer that feeling of self-efficacy to the realm of having to take all this medicine. When they would interview these players months later, they were more likely to talk about [treatment] as something they were in control of, that they had concrete ways of achieving their goal of getting healthy.

Q: Do you still find time to play games?

A: Of course. I have six-month-old twin daughters, so I’m limited to what I can play with one hand while holding babies. I’m enjoying Candy Crush Saga right now, because everyone in my family plays. I always write about the benefits of social bonding. My father-in-law can come over. He can say, “I’m stuck on level 148.” I can say, “Give me your phone. I’ll work on 148 and you can hold the babies. I’ll be playing in the shower, by the way.”

Q: Do you choose games to match your moods?

A: I do try to think strategically. There’s a series of games called Peggle. It’s kind of like a crazy pinball game. It requires skill and attention; I’m pretty good at it. When I was writing my book and feeling kind of frustrated, I would play a little Peggle to get that feeling of, “I am effective.” I’m actually increasing the dopamine in my brain when I do that, and dopamine is one of the strongest drivers of the work ethic. Your brain thinks about the positive outcome rather than the effort required. Once I get that dopamine hit, I need to go do something in my everyday life that is challenging, instead of playing the next level. You are priming your brain to do great things, but you need to step away from the game if you’re going to get that benefit.

FILED UNDER: Editor's Picks The Interview The Vault video games