The new era of gut research

Scientist Giulia Enders on the gut’s power to alter our immune system, weight, moods and memory 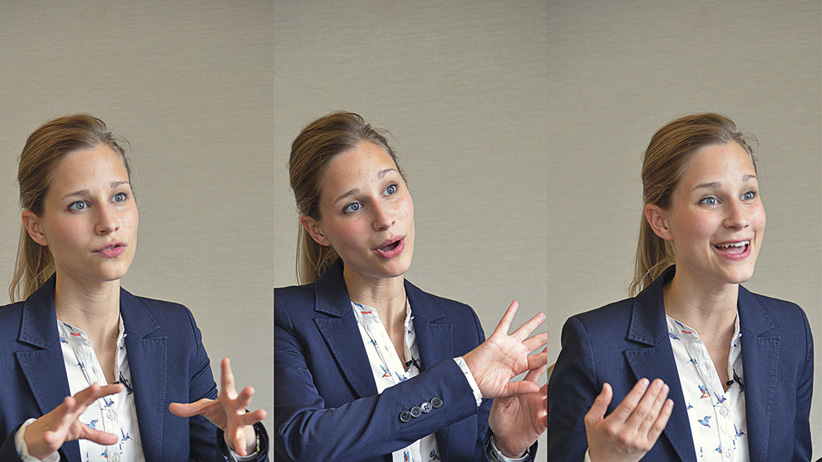 Giulia Enders is a Ph.D. student at the Institute for Medical Microbiology in Frankfurt, Germany, and the author of an unlikely bestseller. Published in 2014 under the German title Darm mit Charme (Charming Bowels) and the following year in English as Gut: The Inside Story of Our Body’s Most Underrated Organ, the book has been published in 30 languages, and sold over 3 million copies. Gut is, in fact, charming in its wide-eyed admiration of interior functions—including the intricate (and often life-saving) choreography involved in a bout of vomiting—and informative when Enders discusses the newest research into the subtle and unexpected links between the brain, the gut and its host of microbes.

Q: How did you come to turn your fascination with our intestinal processes into an international bestseller?

A: When I was 17, I developed a skin disease and realized how little I knew about my own body, so I started reading, and it turned out it was the gut that fascinated me the most. My problem, which I cleared up by diet, was probably connected to my autoimmunity, and the gut accounts for two-thirds of our immune system. So I started studying medicine. In 2012, I won the first prize at the Berlin Science Slam with my 10-minute talk—complete with my sister’s illustrations—on Darm mit Charme and a publisher approached me. When I get back to it, my doctoral dissertation will be on how bacteria stick to our insides, which they need to do if they’re going to do anything for us. What I’ll be looking at is ways to make bad bacteria not stick, an antibiotic-free way to get rid of them.

Q: That’s why you wrote it, but why are people buying it? Why do you think it’s so popular?

A: The main feedback I’m getting everywhere is that people are actually able to look at their own bodies differently and, for most, this is new, especially in the case of an organ that they maybe felt ashamed of or just ignored. Now people tell me they’re feeling curious and positive about their guts.

Q: One relatively recent discovery was that the appendix actually does have a purpose.

A: We’ve been talking about the appendix forever, but yes, since 2007, we’ve come to see how dense it is in immune tissue and how it keeps safe a very high selection of your good bacteria. It’s a reserve, so that even if you have wiped out your good bacteria—with a bout of dysentery, or because you needed laxatives—they can come back from the appendix and recolonize your gut. It does have a use, so, by all means, take it out when it becomes inflamed, but not almost at random, as some doctors used to. We are not smarter than millions of years of evolution; rarely is there a thing of no use in our bodies.

Q: Another new area of brain-gut research looks into the high correlation between certain types of brain and intestinal disorders.

A: In esoteric folk medicine, we’ve always had this intuitive sense of the link between our gut and our feelings. Bad stomach pains always make us feel more psychologically weak than pain elsewhere. You can see the connection in the language we use. In German, as in English, we say “we’re fed up” or you have to have “a strong stomach” to deal with something unpleasant. In German, when we’ve had enough of something, we also say, “I s–t on this!” What’s new is a more rigorous scientific approach: a lot of interest in how people with IBS [irritable bowel syndrom] or inflammatory bowel disorder have high levels of anxiety and depression, and also talk about the possible links between brain and bowel in autism. The information exchange, we’ve learned, is 90 per cent gut to brain, but only 10 per cent the other way; the brain doesn’t have much to tell the gut. But the other way around? If we change the gut flora in animals, we see changes in their immune systems and then in their behaviour, and that includes some behaviours associated with autism—but we see this, still, only in animals.

Q: Our gut flora are very individual in their effects. Some people can process vitamin B better than others, because their bacteria are better at it.

A: Our flora vary from person to person, but there are about two kilograms of microbes—100 trillion individuals from around a thousand species—in each one of us. And more than half are so perfectly adapted to life there—protected from oxygen, kept warm and moist—that they can’t live outside. That’s a problem for scientists who want to conduct behavioural experiments with them. Even the few that can survive outside in special care have to be kept in dishes that have already been in an anaerobic state for three days, because the oxygen can linger in the plastic that long.

But [what’s interesting about] the flora that can tolerate oxygen, which we usually work with, is how many different properties they have. In obesity research, we see that there are obese people who have all the associated diseases, such as diabetes and high blood pressure and so on, but we also see that there’s a population of obese people who are really actually healthy. And when we look at the gut flora of obese people, we see that the ones with all the diseases have a very limited variety of bacteria—very few species, really—and those who are healthy usually have a broad variety. So, variety is one of the key factors we consider when we want to know if someone’s gut flora are healthy. That’s why I like to compare the flora with a forest. It’s really an ecosystem; diversity makes it more resilient.

Q: The issue of variety is tied to modern practices. You think your skin disease was linked to being born by Caesarean section and not being breastfed.

A: We have good reasons for our modern interventions, but you also always have side effects. We see that with Caesarean sections; those kids have very different gut floras, taking their first bacteria not from their mothers’ birth canals, but from the skin of the people who surrounded them at birth, or even from random objects in the hospital. When you consider that those first bacteria are what train your first immune cells to react to all the other bacteria to follow, then it raises questions about the rise of modern illnesses we cannot fully explain: autoimmune diseases, allergies, all those things. With them, we see less diversity in gut flora, but also very different kinds of bacteria than what would usually be found there.

Q: An experiment at McMaster University in Hamilton, virtually switched personalities between two populations of mice.

A: This was very exciting: two types of mice, one more curious, more exploratory, and the other one more shy. The researchers made them flora-free with a cocktail of antibiotics. Then they fed each group with the bacteria typical of the other type. The mice altered their behaviour in a way that flipped their roles—the timid grew bold, the bold more timid—and you could also see on a neurological level that a brain transmitter had been altered by this swap. In the same way, the depressed mice [made to swim] for their lives in a bucket of water don’t try very hard, but give them enhanced gut flora and they swim harder and longer and show fewer stress hormones in their blood. All this raises the question of how much we can change human behaviour with bacteria.

Q: There are a lot of mice trials in this field.

A: It gets even more interesting in the experiments with the mice in the New York lab that are born germ-free—the world’s cleanest creatures, born by sterile Caesarean section and fed on steam-sterilized food. They have huge appendixes and tiny digestive systems. And they seem to take on the attributes of the normal host of whatever bacteria you feed them: Give them bacteria from mice with type 2 diabetes, and they develop problems metabolizing sugar; give them bacteria from obese humans, and they are more likely to gain weight than if they are fed bacteria from humans in the normal weight range.

Q: In 2013, scientists at UCLA tried a bacterial experiment on humans with results that surprised the entire research community.

A: I think they really wanted and expected to see something, but not as surprising as this. They gave female patients yogourt mixed with several probiotics. After four weeks, some areas of the women’s brains were altered, especially the areas associated with processing emotions and pain, sometimes with increased activity and sometimes decreased.

Q: You think of “gut feeling” as a kind of memory?

A: The gut nervous system is huge, second only to the brain’s. It can work through the information it has and send a package to the brain—not everything, just what it considers important. So think of an experience, like being afraid of a big exam. Your gut shares that worry with you—and it remembers it the next time the same experience comes around. We have more memory than just what’s in the brain; that memory can be more complex than the brain’s, it can be accessed faster than consciously going through the possibilities, and it has seen so much in our lives—all of which means there is so much it can pull from its library and send to the brain. The brain is not our sole ruler.

FILED UNDER: Editor's Picks gut stomach The Interview The Vault