The Interview: Atul Gawande on life and death in old age

The surgeon, doctor and MacArthur Fellowship 'genius' grant winner on how medicine is failing us in its approach to death 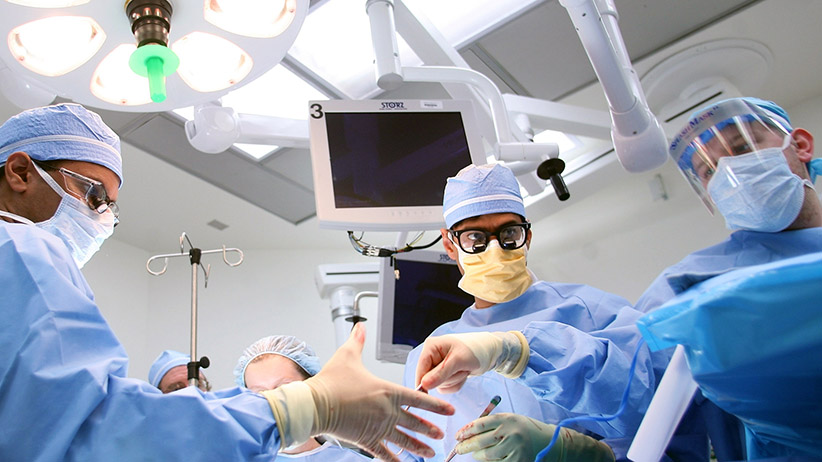 “I learned about a lot of things in medical school,” writes Atul Gawande in his new book Being Mortal, “but mortality wasn’t one of them.” Gawande, 48, is a MacArthur Fellowship “genius” award winner, a professor at Harvard Medical School, the director of the health-systems innovation centre Ariadne Labs, a New Yorker staff writer and author of three previous bestsellers. Through professional and personal experience, Gawande, the Brooklyn-born child of Indian immigrants to the U.S., has concluded that contemporary medicine’s all-out assault on death prevents the dying from having as good a life as possible all the way to the very end.

Q: There is a lot of the personal in this book, including the life and death of your 110-year-old grandfather in India. You write of it to show why the traditional multigenerational family shouldn’t be mythologized.

A: Right, young people want to run from that. And guess what? The elderly don’t want to move back in with us either. Everyone wants independence. When my grandfather died in the bosom of the extended family it worked amazing for him, but only because it enslaved the young, especially the young women who would do the work. And the young men who would expect their careers to follow what the elders determined. I talked about my uncles reaching 80 years of age still waiting to inherit their land—they were not fully adults yet. The economic future of our countries arises from young people’s freedom to work where they want, marry whom they want, live where they want. But when Western societies shifted in that direction, there was no plan for the elderly, for what happens as we face serious illness and loss of independence. So then we backed into the idea, “I know what! Medicine will take care of that.”

Q: What you saw in India brings to mind North America a century ago.

A: Westerners medicalized mortality over the last 50 years because of the poor and sick elderly, hence the term “nursing” home. Now we’ve medicalized the end for almost everyone, to the extent that only 15 per cent of North Americans now die at home. That process is under way today for India, China, Korea and lots of others. In India, in a culture where families have always cared for the elderly, old-age homes are appearing, some very Dickensian—basically poorhouses for the elderly, sometimes just dumped there by families. It allows you to see the past in the present. We’ll see more of this, and the family tensions involved, as these socio-economic transitions occur in countries that still don’t have the funds for pensions and old-age homes.

Q: By medicalizing mortality, you mean a refusal or inability to distinguish between a tragedy to be managed and a problem to be solved . The treatment resulting from the latter, you write, can be “barbaric.”

A: Straightforwardly barbaric. Which reflects just how much of a failure our decision-making is when treatments stop working well. Medicine is so very good at fixing problems, doctors always find room to say, “Well, let’s try another treatment,” without thinking about what that might take away, the harm it could do. You know, the fourth regimen of chemotherapy, you’re just getting the toxicity and none of the benefit, in most instances. Often it’s done out of an inability to have the kind of discussion and understanding of death that would recognize that the best possible day today, with what capabilities we have, is going to be far better than sacrificing yet another week for the sake of some possible future week. Doctors have to learn to ask, “What are your priorities? What are the things you’re willing to trade off and not willing to trade off? What outcomes are acceptable?”

Q: You believe too many people still think hospice means,“You’re giving up on me”?

A: Yes, they do, but hospice is about seeing if we can use our technology and capabilities to help you now. Hospice staff prescribe medications, bring devices, organize experts to come and help, in the name of, “What would be a good day for you today?” There is the story I tell of Peg Batchelder—my daughter’s piano teacher —who was two weeks in a hospital dying from cancer, miserable, in pain, when the doctors told her, “We don’t think we have any other options.” She’s left wondering, “Is there an experimental therapy? Are they abandoning me?” and she’s angry. But then came the hospice discussion: “What would a good day be for you?” and at first it was just to have no pain, and within a couple days the hospice team achieved that, so she raised her sights—“I don’t have that much time left. What if I could teach?” And they made it so that she could [teach], by managing her medication so that she wasn’t in pain or in a daze. Plus, the research shows people in hospice often live longer than those in hospital, because their “treatment” isn’t debilitating.

Q: Doctors are starting to be more comfortable in having that conversation, but you think they’re not yet there?

A: The god-like approach—doctor knows best—is mostly gone. Still common, though, is the retail doctor who says, “You got the red pill, you got the blue pill. I’ll tell you the pros and the cons and then you tell me what you want and I’ll execute.” What patients commonly say to me is, “What would you do?” and the medical school answer is, “You shouldn’t tell them. It’s their choice.” But the real answer has to be, “Okay, I will tell you, but I need to know a lot more about you. Tell me what your fears are, your goals, what outcomes are acceptable and not acceptable.” It’s a counsellor role, and that we don’t teach in the medical schools, though we’re starting to. People are recognizing how the medicalization of mortality has failed us. They want to have the conversations and the chance to have a say about what happens in their life, but neither families nor the medical world fully know how to get there yet. 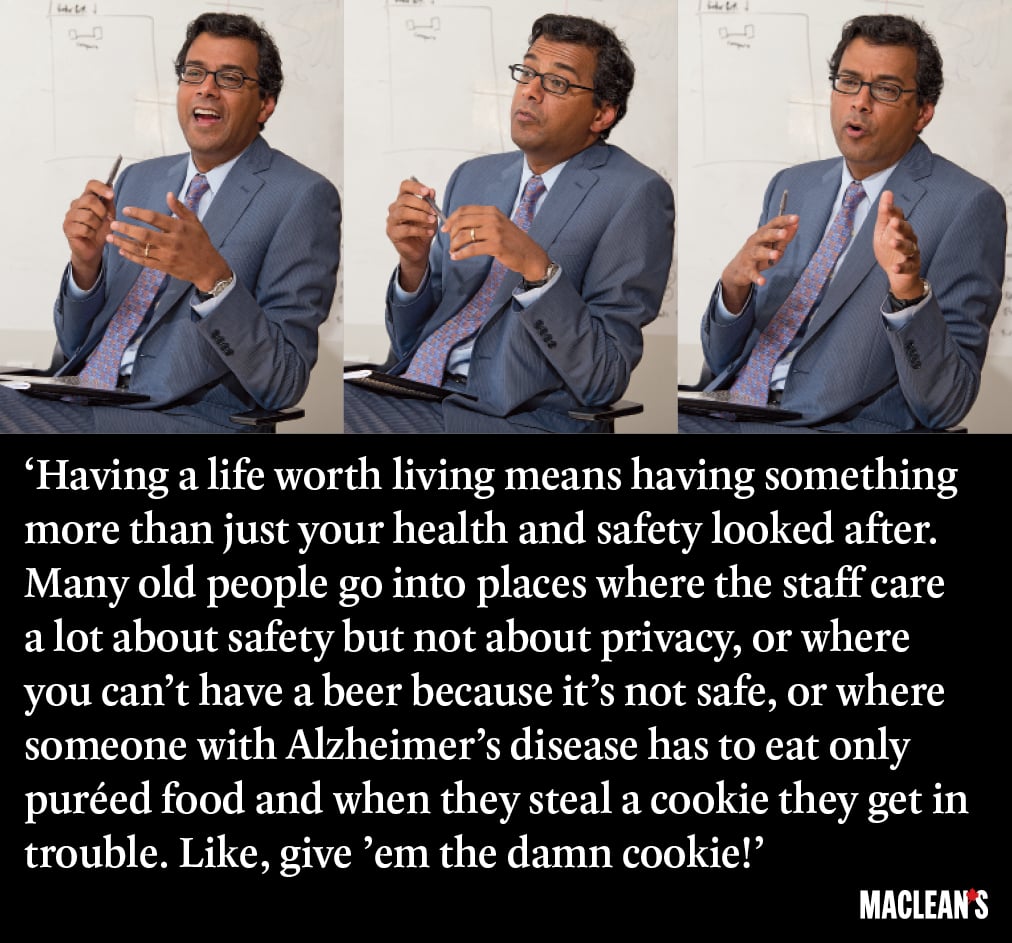 Q: That conversation has to include the families too, of both the mortally ill and the elderly, because loved ones and patients can have very different perspectives.

A: Someone I spoke to expressed it best when she said, “Safety is what we want for those we love, and autonomy is what we want for ourselves.” Having a life worth living means having something more than just your health and safety looked after. Many old people go into places where the staff care a lot about safety but not about privacy, or where you can’t have a beer because it’s not safe, or where someone with Alzheimer’s disease has to eat only puréed food and when they steal a cookie they get in trouble. Like, give ’em the damn cookie! That turns out to be why the folks in old-age homes can be so miserable. It took me forever to figure out why my poor wife’s grandmother, Alice, was so unhappy in her independent-living place, though it seemed fine to the family, because she didn’t have the freedom to take the chances she wanted to take.

Q: Until she seized that autonomy at the end and didn’t make the call to the nurses.

A: That’s right. As far as I can tell she let herself bleed to death one night.

Q: You quote Karen Brown Wilson, who founded the field of assisted living, saying families looking at old-age homes focus as much on, “Will I be happy leaving Mom here?” as on, “Will Mom be happy here?”

A: The whole nursing-home industry sells to kids and the kids are concerned with safety and with their own peace of mind. They go through a place asking, “How many falls do people have here?” and, “What’s the safety rating?” They don’t ask, “What’s the loneliness rating?” What’s the, “I-feel-totally-purposeless rating?”

Q: What is your thinking on assisted dying?

A: There’s a great concern to control the possibility we will face unbearable suffering, but I worry that our energy has gone toward trying to ensure a good death rather than what people fear even more: not being allowed to have as good a life as possible to the very end. We’ve expended a lot of effort on assisted death, and way too little on assisted living. Too much emphasis on it may mean less resources put into hospice. The lessons coming out of the three U.S. states where physicians can prescribe medication for people to achieve their own deaths, are that it’s a tiny fraction of the population that takes up that option, and only about half of those use it. I think there’s a place for making sure people have that assurance, but more important for me is a case like Peg Batchelder who was faced with unbearable pain, but got help and realized she still had potential, even with six weeks to go, and she achieved it.

Q: No matter what—hospice, assisted death, heroic medical efforts—there comes an end. You point out endings are not controllable.

A: There are lots of humiliating, grim, bodily-fluidic aspects to living all the way to the end, and a beautiful death with dignity may not happen. When I was putting this together, I was a surgeon who took on problems I could not always fix, a son with parents in their late 70s facing mounting difficulties, and a writer coming to realize I’m not the only one who seems to be struggling with these situations. But, yes, an ending always comes, and we need to honour people’s wishes during it as much as we can.