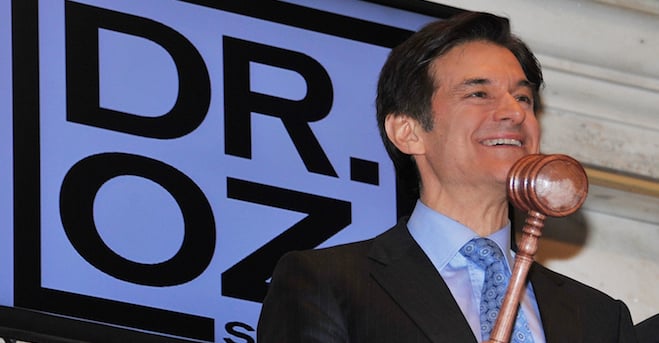 The year 2012 brought with it many opportunities for wielding a big, debunking stick and pointing it towards outrageous attacks on science. From the Science-ish archives, to be read with a festive beverage, here are the worst offenders from 2012:

1. DR. OZ, FAITH HEALER
Though he may have started out as one of America’s most-trusted MDs after earning a seal of approval from none other than Oprah Winfrey, the medical community has long known that Dr. Mehmet Oz can be a font of pseudoscience. This year, when he was in Toronto to give a motivational lecture about the “biology of blubber,” I had a chance to sit-down with Oz and grill him about his use of medical evidence. In particular, when asked about his promotion of raspberry ketones for weight loss—a dubious supplement—he said it was “an example of where I’m trying to give you hope.” Needless to say, he didn’t pass the evidence test. I’m pretty sure I was the only reporter in the room he didn’t hug that day.
Related link: Dr. Oz, faith healer

2. BAD REFUGEE HEALTH
This year, the immigration minister Jason Kenny said he would “protect public health and safety, ensure that tax dollars are spent wisely and defend the integrity of our immigration system” by scaling back the health coverage for refugees and asylum seekers under reforms to the Interim Federal Health Program. I looked for evidence to back his grand proclamations, and found there simply isn’t much. These reforms are driven by ideology, not informed by evidence. As Minister Kenny announces details about Designated Country of Origin List today—folks from these places will no longer be eligible for basic and emergency health care—it would be great to ask him how he uses evidence to inform his policies. Also, what he thinks about the research that suggests leaving people without health coverage comes at the cost of their individual health, wealth and happiness.
Related link: Health-care coverage for refugees is about to change in Canada

3. CANADA’S FUNNY APPROACH TO DRUGS
At a time when other countries are pushing to improve transparency around clinical trials—researchers in Europe have even called on governments to sue the  drug-maker Roche over hidden data about Tamiflu—Canada lags behind. One seriously anti-evidence proposal is the federal government’s “web-based list” of clinical trials for Canadian patients. This initiative patently ignores the evidence that has been amassed around similar (unsuccessful) listings. It is also isolated from the on-going conversations that have been happening about open data here and around the world. As one Canadian researcher put it, this country is failing in its “human rights obligations to protect the health and well-being of Canadians by allowing the continued hidden production of clinical trials data.” To make matters worse: That’s not our only science-ish drug problem. We are the only health system in the OECD with universal health-care but no public and universal coverage for prescription drugs; we over-pay for generic drugs; the provinces have a patchwork approach to monitoring pharmaceutical prescriptions; and Health Canada has trouble with transparency, or as the physician-researcher Dr. David Juurlink said: “No one has any idea what’s happening behind the walls (there).”
Related reading: Canada’s drug problems, Dear Federal Health Minister, Why is Canada such a laggard on clinical trials regulation?, Health Canada responds to questions about hidden clinical trial data, Leading researchers ask our federal health minister to reconsider clinical trials policy

4. THE FEDERAL GOVERNMENT IS ANTI-SCIENCE?
Speaking of Health Canada’s transparency problem, journalists this year continued to document our federal government’s alleged anti-science approach. (Read here and here about the “muzzling” of federal researchers and “unacceptable” delays and refusals for interviews.) The debate really heated up with a “Death of Evidence” protest put on by a mob of nerdy researchers in Ottawa. I found there was a more nuanced story to be told about the demonstration, and that the complaints about muzzling aren’t necessarily about an anti-science government, but one intent on controlling the message—about health care, immigration or anything else. In 2013, it be great to see Canadians continue to demand accountability and transparency from all levels of government.
Related link: The Scientists versus Harper, The 13 Biggest Health and Science Questions Facing the Nation

5. ONE IN FIVE PEOPLE SUFFER FROM MENTAL ILLNESS
A very smart Science-ish reader wrote in about a “suspicious” and sticky statistic. Everywhere he looked—in news stories, pamphlets, websites far and wide—he was told that one in five of us lives with a clinical mental illness. I traced the oft-cited statistic back to its origins, and found that it’s not as solid as its ubiquity and persistence might suggest. Like many difficult questions in life, we actually don’t have an answer about how many suffer from mental illness.
Related link: Mental illness: does it really affect one in five?

6. WHAT DO WE PAY DOCTORS? NO ONE KNOWS.
Spending on physicians is one of the biggest drivers of cost in the health system, and yet we don’t actually know how much we pay them. The best cross-country data doesn’t cover all forms of physician compensation (just fee-for-service payments), nor does it account for overhead (although this impressive Ontario study tried to correct that). As Dr. Rick Glazier, a researcher who has examined physician payment models, told me, “It’s actually shocking that we don’t know.” Still, when provincial governments negotiate with doctors’ unions over pay every few years, parties on both sides of the table like to cherry pick numbers and make grandiose statements about who makes what and where. Again, most of these claims are science-ish; we simply don’t have the data. “This is an enormous public expense running into many billions of dollars and the fact that it’s not accounted for and can’t be compared across jurisdictions is pretty telling that no one is minding the store,” said Glazier. “Shouldn’t we as tax payers know where the dollars are being spent?”
Related link: Where in Canada do doctors make the most money?

7. COFFEE COULD KILL/SAVE YOU DEPENDING ON THE DAY OF WEEK
Even with an army of skeptics who try to put reporting about coffee-related health claims in context, these stories never seem to go away. Coffee is good for you one day, bad the next. One of the best examples of the fickle nature of these headlines comes from the Daily Mail. In this newspaper alone, “Drinking coffee halves the risk of mouth cancer – even in smokers and drinkers”, “cuts womb risk,” and “damages babies’ DNA.” Last year, I called for some sober reflection about why we journalists tend to report the latest findings about food and nutrition in a vacuum. While some progress has been made, these stories will surely persist in 2013 and beyond. Best to read them with a critical gaze.
Related link: How reading about coffee can harm your health

There were other science-ish claims that persisted in 2012—scaremongering about Wifi, dumb discourse about diets, food label lies, and crazy talk about vaccines, cures for autism, and childhood mental illness—all lampooned in a timely fashion on Science-ish. We also learned that some things we thought we could depend on—flu shots, routine screening for certain cancers—may not be as sound as was once believed. This flip-flopping led to all kinds of science-ish speculation and conspiracy theories. But it probably shouldn’t have. Such debates exemplify the evolving nature of science, how consensus changes and guidelines adapt as the evidence progresses, and we learn more.

My wish for 2013 is this: Like good scientists, we aim to be critical, nimble and open-minded in our thinking, and we continue to raise the level of discourse about health, hold to account those who misuse and abuse science, and always, from the personal to the political, shoot for wise, evidence-informed decisions.

Science-ish is a joint project of Maclean’s, the Medical Post and the McMaster Health Forum. Julia Belluz is the senior editor at the Medical Post. Got a tip? Seen something that’s Science-ish? Message her at julia.belluz@medicalpost.rogers.com or on Twitter @juliaoftoronto