Sex shocker: Why men fake it, too

Dr. Abraham Morgentaler on myths of impotence, the revolution in testosterone therapy—and faking it 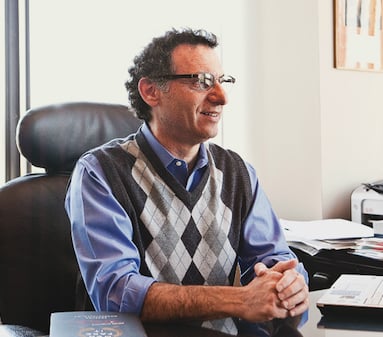 This article was originally published April 14, 2013

Harvard Professor Dr. Abraham Morgentaler, founder of a Boston clinic for male sexual and reproductive disorders, offers a glimpse behind the examination-room door at the hopes and hang-ups of his patients. His 2013 book, Why Men Fake It: The Totally Unexpected Truth About Men and Sex, takes the measure of manhood in the age of Viagra, Internet porn and shifting gender roles. Medicine has made huge advances in overcoming male sexual dysfunction. Now it’s time to end the myth that men are selfish sexual louts, he says. Satisfying their partner is the true goal of modern man, he says. No, really.

Q: As an undergrad you researched the effects of testosterone on the brains of lizards. If stereotypes hold it’s a short hop to the sex lives of men.

A: Women have joked for a long time that the male brain is pretty similar to a lizard brain. In fact, sexuality comes from the deep part of our brain that we do call the reptilian brain. The fascinating thing about human sexuality is this interface of primal, biological urges with thoughts, reason and culture.

Q: Can you describe your practice at Men’s Health Boston treatment centre?

A: I’m a specialist in what I call guy stuff. For over 25 years I’ve been seeing men around their most intimate issues, sexual issues, reproductive issues and along the way have made a specialty out of low testosterone for men. There’s a huge part of this about how the guy sees himself as a person, how his sense of masculinity is affected by these difficulties.

Q: Women of the 1970s had books like Our Bodies, Ourselves as a sexual owner’s manual. Men had what? Playboy and Penthouse?

A: Guys really have a problem, which is they don’t tend to talk much among themselves about what’s true, in the way women support each other in their personal issues. It would be very easy for people to think we know everything there is to know about sex because we’re surrounded by it. Stuff is so graphic now it’s unbelievable and yet what we don’t know about or talk about is the impact of sex and sexuality on how [men] feel about themselves and how it impacts relationships.

Q: You say the sex research of Masters and Johnson messed up a generation of men. How?

A: The beauty of the work of Masters and Johnson, who worked in the ’60s and ’70s, is they did bring the ideas about sexuality into mainstream public life. But the thing they’re known best for is the thing that turned out to be terribly wrong. They concluded the vast majority of men who had what was called impotence at the time, and now we call it ED, erectile dysfunction, that it was all in their head. Not only did my colleagues believe it but men themselves through the work of Masters and Johnson believed what they had was almost like a failure of male willpower. Men would come in and tell me how their relationship with their mother when they were four years old might have contributed to this problem, or [childhood] bedwetting. What we learned in the late 1980s was that the vast majority of men who have erection issues have a physical basis for it, and it’s extremely common.

Q: What are some of those causes?

A: For the most part when the erection fails it’s due to some variation on blood-vessel issues. Either the man doesn’t have enough blood flowing in or, even more commonly, they have too much leaving the penis before it should. In many cases we’re recognizing now there can be a hormonal cause—low levels of testosterone. Diabetics are at increased risk, anybody who has high blood pressure, high lipids, high cholesterol or heart disease is at risk of ED.

Q: The title of the book, Why Men Fake It, was inspired by a patient you call David who was incapable of having an orgasm with his partner so he started faking it.

A: When David first came to my office I confess I didn’t know this was possible. I’d never heard of such a case. But what fascinated me even more were the reasons he gave for faking it. One of my great interests is in the minds of men. Overall, men have gained an undeserved bad reputation. We have this notion that men, especially when it comes to sex, are selfish, thoughtless, uncaring and concerned only with their own self-gratification. What David’s story showed me, and that of many other men I present in the book, is that one of their main impulses is actually to be a sexual provider. Men care more about their ability to be good lovers for their partner than they do about their own satisfaction. David sensed [his partner] was feeling badly about herself as a woman because of her inability to get him to climax. So he began faking his orgasms to help her feel, in his mind, okay about herself, which I think is noble. Most people would laugh at the idea that men are noble sexually, but I absolutely believe it. You get them behind a closed examination-room door and more often than not there’s a woman they care about deeply and their prime concern is about being great for them sexually.

Q: You say drugs like Viagra and Cialis opened a window into the male psyche. How so?

A: Viagra came in 1998. Before its appearance we did have treatment for ED. It was nothing as simple as a pill. We had injections, we had surgery to put in [penile] implants but on the larger cultural plane, sex was something that wasn’t discussed. ED was considered shameful. Not only was it unmanly but there was a leftover feeling that a man who couldn’t have sex had something wrong with him, not just biologically but in the essence of his manhood. Once Viagra came out, whether it was a masterful advertising campaign or maybe our culture was ripe for it, everything changed. People would joke about Viagra. Some guys would talk about it openly, without admitting they had ED, but they would talk about how they had gotten a hold of it and what it had done for them. If a man who’s perfectly capable of having sex has pleasure and can last as long as he wants but wants to be a smidge harder by taking a pill, what does he get out of it? The answer is nothing. It’s what he thinks he’s able to provide for the woman.

Q: The book has many examples of this.

A: There’s a 27-year-old paraplegic who came to see me with ED. He can’t move or feel anything below the waist. He’s married. I helped him have sex medically. He comes back and he feels fantastic. He said, “I feel like a man again.” The kicker is, he doesn’t feel anything, doesn’t have an orgasm. But he’s like a new man. It’s because men get a big sense of their masculine identity by being able to give sexually to their partner. I like to say a man’s definition of great sex is when a woman says, “That was great sex.”

Q: You’ve found testosterone therapy to be highly effective and the fears it might trigger prostate cancer to be overblown.

A: Testosterone therapy was been one of the great revolutions for men over the last 15 to 20 years. The number of men who have low testosterone, who are diagnosed and treated, is far too low. Our ideas about testosterone have changed. The concern about prostate cancer with testosterone has greatly diminished. For the first time people are able to start seeing without blinders on and [without] fear, what the potential benefits can be for men’s general health as well as their sexuality.

Q: You write that many men getting testosterone therapy in your practice are invigorated, and not just sexually. One man bragged about having the energy to clean out his garage—not much of an incentive if you ask me.

A: Everybody’s different. It doesn’t work for everybody. People do have to be deficient in it to see benefits from it, but [low testosterone] is very common.

Q: We hear a lot about women’s body issues but men, as your book attests, invest much self-worth into what is, on average, you say, just over five inches of real estate. Is this healthy?

A: I don’t think it’s healthy for men to be so focused on their equipment. But they are. Some of it may be biologically driven, but a lot of it is cultural, too. I am very concerned about young men these days who come in with really some nutty ideas about whether they match up as men. Part of it comes, I think, from the easy availability of pornography, where the men who are selected for those films are often, if you’ll forgive the term, freaks of nature. One of the key questions for young men is, “How do I match up as a man?” A lot of that gets narrowed down to, “Is my penis okay?”

Q: You quote a study that says 75 per cent of men think their penis is smaller than average—a statistical impossibility.

A: Men are inclined to believe that they may not be as good as the next guy. Relationships are really complicated. I think our ideas about masculinity are in flux, especially with changing gender roles these days. Men do very well with some affirmation that who they are, and their more noble instincts, are good and valuable. And that they are okay.

Q: If I can crudely summarize part of the thesis of this book: a man can be defined by his penis, and still not be a dick.

A: [Laughs] Very good! I don’t think I can say that, but I like it very much.

Q: I find it a hopeful book that may bury some male stereotypes. We are worthy of love.

A: Absolutely. If there’s one message I’d like people to get out of this, it’s that there are an awful lot of good men out there.