Why the NHL is the ultimate breeding ground for mumps

With 14 players coming down with mumps, hockey faces a health threat from the past 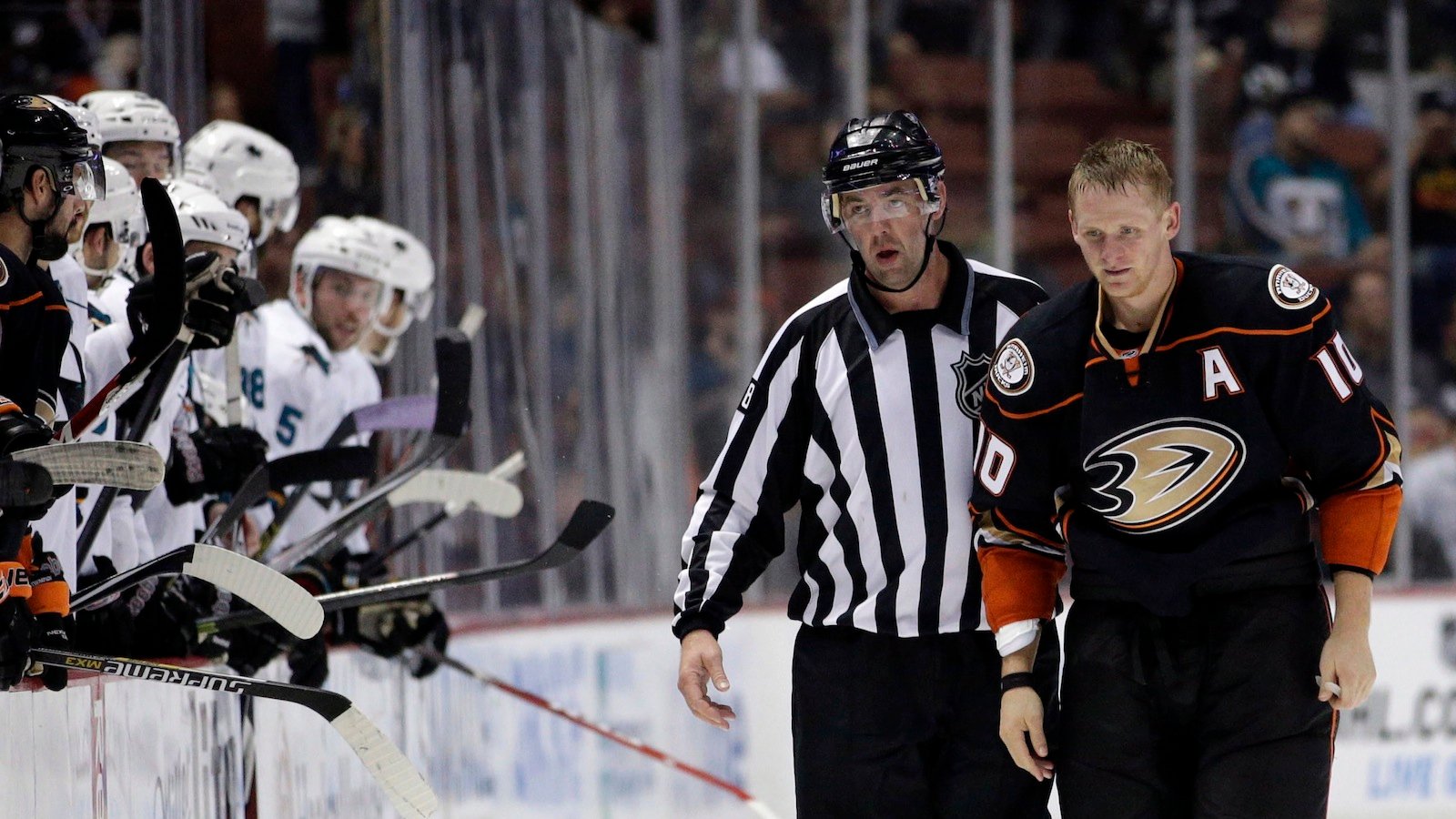 Anaheim Ducks’ Corey Perry, right, is escorted off the ice by linesman Brian Mach after receiving a penalty for misconduct during the third period of an NHL hockey game against the San Jose Sharks, Sunday, Oct. 26, 2014, in Anaheim, Calif. (Jae C. Hong/AP)

The National Hockey League is facing a health threat straight out of the last century. Two referees and at least 15 players, including Pittsburg Penguins star Sidney Crosby, have come down with the mumps virus.

Although this point is up for debate, the outbreak seems to have started among the Anaheim Ducks. Corey Perry, Francois Beauchemin, Emerson Etem and Clayton Stoner were all infected. On Oct. 17 the Ducks played the visiting Minnesota Wild. Five of that team’s players—Keith Ballard, Marco Scandella, Jonas Brodin, Christian Folin and now All-Star defenceman Ryan Suter—have become ill. The Wild played the St. Louis Blues, several of whom came down with mysterious flulike symptoms that haven’t been confirmed as mumps. But the Blues then played the New York Rangers, and Rangers Tanner Glass and Derick Brassard definitely have the mumps. The Wild played the New Jersey Devils on Nov.11, which got Devils players Adam Larsson and Travis Zajac sick. Finally, the Devils played the Penguins on Dec. 2, which brought the virus to Crosby’s locker room. He shared it with teammate Beau Bennet.

There was not a representative from the NHL and NHL players’ association joint health and safety committee available to be interviewed about the precautions being taken to stop the spread of infection. A spokesperson sent an email stating that information about mumps was sent to all team physicians in mid-November, along with recommended changes to “bench and locker room behaviour.” Booster shots are encouraged, but the statement said “vaccination decisions for mumps and any other diseases are made at the club level.”

About 1 in 5 people who get mumps never show signs of disease, but can still spread it to others. Symptoms don’t start until 12 to 25 days after infection, so chances are that at least a few NHL players are in for a nasty Christmas present.

Mumps are miserable, but not serious for most people, causing fever, headache, loss of appetite and flulike symptoms. The classic indicator is parotitis, or painful swelling of the salivary glands, which gives sufferers their characteristic chipmunk cheeks. In years past, mumps was a leading cause of childhood deafness, and meningitis is a fairly common and potentially life-threatening complication that can also cause hearing loss. Orchitis—painful, swollen testicles—is seen in 20 to 30 per cent of adult men.

An estimated 13 per cent of men with that unfortunate complication end up with lasting infertility. However, the science is a bit fuzzy, and the most often cited studies are extremely out of date. Some were done on soldiers in the Second World War. Men who had a history of orchitis due to mumps had fewer children, and one in three had some sort of lingering abnormality with their sperm. That on its own is not definitive proof of sterility, but can certainly contribute to a reduced ability to conceive. Up-to-date research hasn’t really been called for: before the first vaccines were introduced in the late 1960s, few people escaped childhood without catching mumps. Today it’s rare in the developed world.

The virus spreads easily through contact with infected saliva, on surfaces or in airborne droplets. Hockey players are nature’s perfect population for a mumps outbreak—they share water bottles and towels, spend extended periods of time in close quarters, and regularly bash heads with opposing team members on the ice, spraying spit hither and yon. As young adults, NHLers are also at just about the right age to be uniquely vulnerable to the disease. People born before 1970 are largely unvaccinated but largely immune because of childhood exposure. Beginning in 1969, Canadian children routinely got one mumps shot in infancy. A single shot is estimated to protect 64 to 80 per cent of people, but the immunity fades with time. In 1996 and 1997, an MMR booster program was rolled out for children between 18 months and four years old. People who were born after 1970, but were too old to receive a second shot when they started kindergarten, may not have very strong immunity.

Inadequate vaccination isn’t the only factor at play, says University of Ottawa virologist Kathryn Wright. The large mumps outbreak in the U.K. in 2003-2005 was linked to reduced vaccination, she says, but in North America many mumps cases are being diagnosed in people who’ve had all their shots. Scientists think that in highly-vaccinated populations, there just isn’t that much virus circulating. When a vaccinated person comes into contact with the virus, they produce a flood of antibodies to fight it off. It’s essentially a natural booster shot that refreshes the immune system for any future onslaught. Without exposure, immunity wears off as the years pass (a full-blown case of mumps, however, leaves you immune for life).

Even people who have had two shots are only 88 per cent protected—not bad, but not great if you’re faced with mumps on every surface in the locker room.