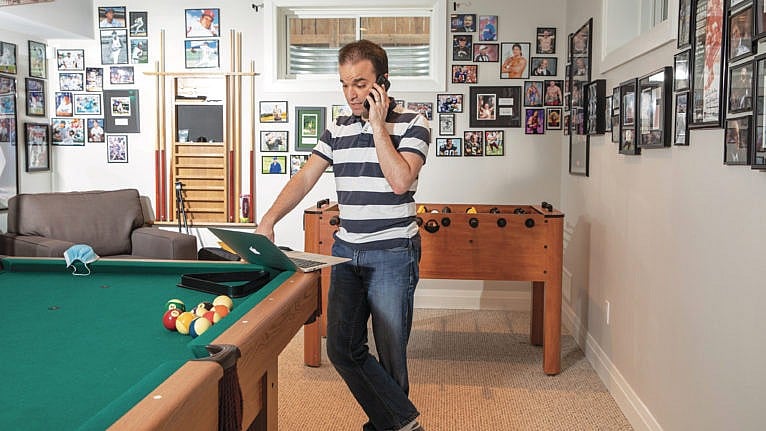 From his basement, Elia called each of his 172 patients who were eligible for the vaccine (Photograph by Brett Gundlock)

It was mid-afternoon on March 1 when the Middlesex-London Health Unit announced it was expanding eligibility for COVID-19 vaccines to those in the community aged 80 and older.

Mario Elia, a family physician in London, heard the news almost immediately, and his office used its email blast system to send an alert to every patient in their practice, hoping to spread the word as quickly and widely as possible. Elia estimates that 70 per cent of his patients are on the email list, but those over 80 are less likely to be in that group. Time was of the essence: vaccination appointments would start booking through a website and phone number at 7 a.m. the following day.

Elia ran a quick search on his patient database to find those in the eligible age group: 172 people. Then he printed out the list and just started dialling. “I’m perhaps too impulsive by nature, so I ran the list and started calling patients before I did the mental calculation of how long this would take me,” he says. “I have a very understanding wife who agreed to look after our daughter for the afternoon while I made all these phone calls.”

He did them all himself rather than divvying them up among his office staff, because Elia figured they were busy enough and dumping hours of phone calls on them was unfair. But the other part of the reasoning is the deep repository of information a family physician builds up over time. Elia started practising in 2012, taking over from his own family doctor; he knew which of his patients could manage the information themselves, which ones would need extra help and which friend or family member to call.

“For my patient who’s 88 with dementia, I’m not calling her to have her set up her appointment, because she’s not going to know who I am,” he says. “Or she may, and she’ll hang up the phone and forget what I told her. I know to call her friend who brings her to all her appointments and her friend will be the one to help her navigate that.”

Elia found an enthusiastic audience for his vaccination news bulletin. “It’s not been the best quality of life for them the last year, not seeing grandkids, being confined to their homes,” he says. “So obviously the prospect of this was quite exciting for a lot of them.”

READ: What can Canadians do after getting the first dose of the COVID-19 vaccines?

He’d worried that he might be drawn into addressing medical concerns his patients had been “collecting,” once the opportunity of having the doctor on the phone presented itself, but the conversations were quick and pleasant. Elia finally finished his calls that night shortly before 10 p.m., ultimately reaching 149 of his octogenarian-and-ups. By that point, a small handful had seen the information on the evening news and managed to write down the details. About half had seen the office email blast; the rest heard it from him for the first time.

There was one other trend, too: vaccine hesitancy was “virtually non-existent in this demographic,” as Elia tweeted in a brief play-by-play of his stint as a one-man call centre.

In the end, he was glad for his impulsiveness. “A hundred percent I thought it was the right thing to do, absolutely,” he chuckles. “No regrets.”

READ: 15 questions about the AstraZeneca vaccine in wake of new recommendations

The problem is that family doctors like Elia have been sidelined in Ontario’s vaccination efforts so far, in contrast to how flu vaccines have long been handled. Over the next few days, his office received a steady trickle of calls from patients cheering about the vaccination appointments they’d set up. But Elia has no way to know how many have booked or received a vaccine because the central vaccination database doesn’t yet push the information into patient charts. The current scarcity of COVID vaccines and the decision to administer them through mass vaccination sites and pharmacies for now has also removed one of the most important roles of family physicians, eliminating what they call “opportunistic vaccination.” “It makes it challenging from a vaccine hesitancy perspective,” Elia says. “Because it’s one thing to have them in the office, to have a patient in front of me, and me to address their issues and we vaccinate right away.”

At the same moment that his patients were storming the website and phone line to book appointments on the morning they went live, Elia, his mother, his aunt and two cousins were doing the same, in a collective attempt to secure spots for his grandparents. They managed it, and his three grandparents have now had their first shots. “My grandparents had five of us online,” he says. “Not everyone has that, which is part of the equity issue we need to be looking at with vaccines.”

Elia’s little caper contains lessons for Canada’s wider vaccine effort: people—especially in certain populations—need advance notice for important news to reach them; those with a network of tapped-in family or friends have a huge advantage; family doctors are the best ones to talk people through all of this.

And sometimes, even in an age of high-tech solutions, at an extremely wired doctor’s office, what you really need is shoe leather. “It became basically me printing off a paper list and getting out a phone. So in the end,” Elia says, “we kind of got down to an old-school approach.”

This article appears in print in the May 2021 issue of Maclean’s magazine with the headline, “Beyond a call of duty.” Subscribe to the monthly print magazine here.