Turns out we don't 'need' the gym after all 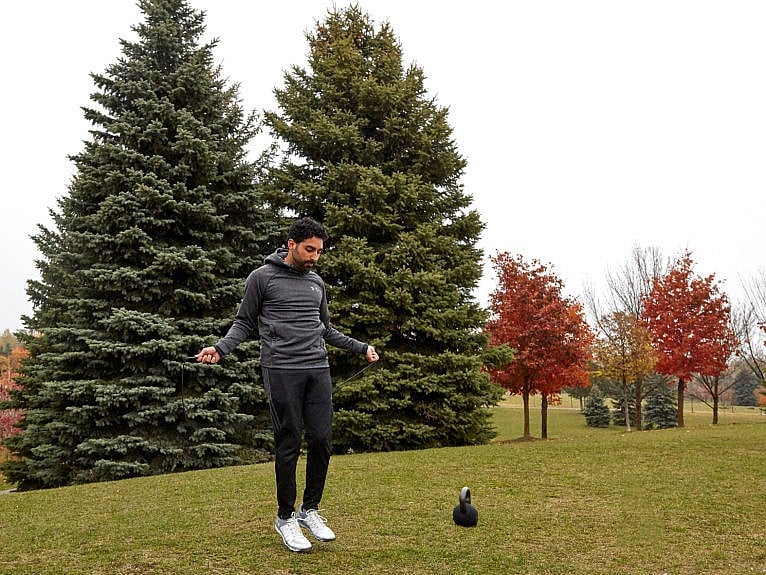 Singh working out in a park (Photograph by Michael Stuckless)

What’s the first thing that comes to mind when you think about health and fitness? Most likely, it’s sweating it out at the gym. The focus on fitness has been pervasive in North America for decades but has more recently been amplified to levels of near religious devotion by the pressures of social media and the rise of influencers. “We live in a culture that is very much about self-improvement. We are not good enough looks-wise, health-wise,” says Mary Louise Adams, a Queen’s University professor who studies the sociology of sports and exercise. “There are all sorts of things in our culture that push us to the gym aside from how we feel in our bodies.”

This obsession with “fitness” spawned a $4-billion business in Canada as of 2018, according to Statistics Canada, up nearly seven per cent from the previous year, driven by a wider range of facilities opening—from budget gyms to luxury fitness clubs. But when the pandemic hit, the industry’s rise came to a halt faster than an out-of-shape newbie trying their first CrossFit class. The months-long closures brought with them a reality check; as people looked for ways to keep fit without the gym, many have come to the realization that they didn’t need one after all.

For David Singh, a 34-year-old Toronto-based sports journalist, going to the gym before the pandemic was like therapy and a key part of his morning routine. He had a gym membership and attended bootcamp classes, but when both shut down in March, he, like many, turned to buying fitness equipment online. Kettlebells were sold out for weeks at many retailers but he managed to snag a set.

“Since the pandemic began, I’ve started to realize that I was wasting a lot of time in the gym,” he says. Driving to a facility, changing, showering, waiting for others to finish with equipment all added to the 45 minutes he’d spend actually working out. “One benefit that I have seen at home is that you can kind of squeeze in a workout—and a pretty solid workout—any chance you get.”

For the first time in a long time, gyms can no longer be the primary place for fitness, says Nicholas Rizzo, fitness research director at RunRepeat.com, a U.S. sneaker review website. Throughout the pandemic, RunRepeat has surveyed its global audience on their thoughts about the gym. In August, 69.23 per cent of Canadian gym members surveyed reported not returning to the gym even though many had reopened across the country by then. “COVID has caused people to realize that gyms are not a necessity, but more of a luxury,” says Rizzo.

The pandemic likely won’t mean the end of gyms for those who have come to rely on heavy-duty equipment or the sense of community found there. And the ideologies that caused our obsession with fitness are strong, says Adams, so she doesn’t anticipate a larger cultural shift.

During the summer, Singh took to working out outdoors and hopes to repeat that when warmer weather is back. He says he wouldn’t rule out returning to the gym, but he knows friends who say they’ll never go back. Singh bought heavier kettlebells this fall as he prepares for a winter of exercising indoors. “At first I really, really missed [the gym],” says Singh. “[But] you can only reminisce about it for so long.”