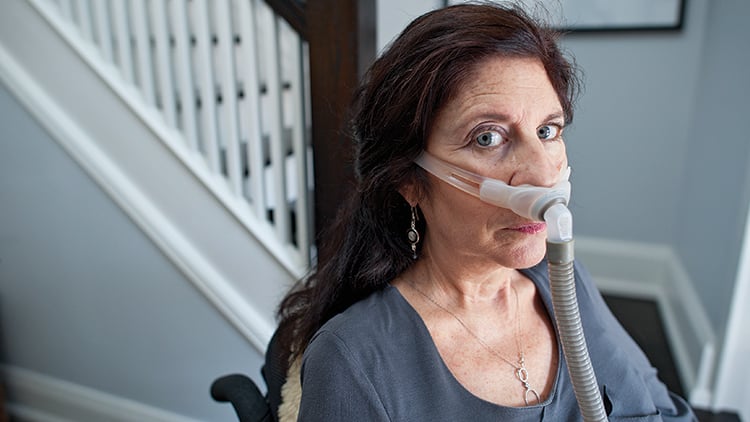 Update, March 2015: Melanie York, the subject of this article, passed away in March 2015. Follow this link to a celebration of her legacy.

In 2007, Melanie York was living the fast-paced life of a Toronto television producer, a life filled with travel, work and friends. Then she began to notice a persistent weakness in her shoulders and arms—difficulty tossing a salad, pulling up a zipper, taking off a sweater. “I thought, it’ll go away on its own,” says York, now 60, who has dark hair and vivid blue eyes. She went to see a doctor, and two different neurologists. After a year and a half of appointments and exams—a period during which her condition was getting worse—York was diagnosed with amyotrophic lateral sclerosis. ALS, better known as Lou Gehrig’s disease, ravages the motor neurons responsible for voluntary muscle movement, like walking, talking and swallowing. There is little in the way of treatment and no cure. Hearing the diagnosis felt like coming face to face with a “big black wall,” says York who, like 90 per cent of ALS patients, has no family history of the disease. Within two years she was paralyzed from her shoulders down.

Aside from Lou Gehrig himself, the New York Yankee great who died at age 37, Stephen Hawking may be the most well-known ALS sufferer, although his slow-progressing form of the disease is extraordinarily rare. (In those cases, patients are gradually paralyzed until they can no longer eat or breathe on their own—a loss of function that York compares to “being buried alive.”) Roughly 3,000 Canadians live with ALS, and because it typically moves at a furious pace—killing half of all patients within 18 months of diagnosis—most people don’t realize that its incidence rate is as high as multiple sclerosis. Although it usually strikes around age 55, doctors report that patients seem to be getting younger, for reasons they don’t understand. They’re increasingly encountering ALS patients in their twenties, thirties, even in their late teens.

For decades, this disease has remained mysterious and little understood. The one drug that exists to treat ALS, approved almost two decades ago, extends a patient’s life by only a few months. Symptoms must be mitigated through equipment or therapy: Today, York uses a motorized wheelchair, although she can’t drive it on her own. She breathes with the help of a BiPAP, a small device that pushes air into her lungs, and has a live-in caregiver to help her. “When it first happens, you think, we’re going to fight it,” says Haskell Beale, her common-law spouse, who met York on a blind date 13 years ago. “Then you find out you can’t fight it.”

But now scientists seem to be making some real progress. They’re uncovering surprising links between ALS and other diseases, like Alzheimer’s, Parkinson’s and frontotemporal dementia, which were once thought to be completely unrelated; and they’re seeking out new ways to identify ALS earlier, even to stave it off from the outset. In Toronto, a research collaboration extends from scientists, to doctors, to patients themselves—many of whom agree to donate their brains and spinal cords after they die. “They feel like, let’s make sense out of something so senseless,” says Dr. Lorne Zinman, director of Sunnybrook Hospital’s ALS clinic.

James Hunter, founder of NexGen Financial and former CEO of Mackenzie Financial Corporation, is now paralyzed from ALS. “My mind is as sharp as ever and I communicate using a sophisticated computer,” he tells Maclean’s in an email. Hunter, who funds research through an initiative that bears his name, believes a “clinical solution” could come within the decade. “Too late for my generation,” he acknowledges. “But with God’s grace, there will be a cure for subsequent generations.”

Janice Robertson’s office at the Tanz Centre for Research in Neurodegenerative Diseases, which looks out over downtown Toronto, is a gathering place of sorts: On a recent afternoon, one colleague after another popped in for a chat. Robertson, who wears her reddish hair cropped short and speaks with a Scottish accent, came to Canada in 1997 to work on ALS. During her Ph.D. training in the U.K., she studied Alzheimer’s disease; her lab was next to an ALS clinic, where she saw patients coming for their checkups.

She was struck by the speed of ALS, and its devastation. At Tanz, which is affliated with the University of Toronto, she began recruiting other scientists on the same floor—even those who were focused on different neurological disorders. “Janice convinced me to work on ALS,” says Ekaterina Rogaeva, who studies the genetics of Alzheimer’s and other neurodegenerative diseases. Robertson makes a passionate spokesperson. She herself has battled cancer twice. “I’ve been lucky. I’ve had very effective treatments,” she says. “I just want the same thing for people with ALS.”

ALS was first described in the 19th century. Unlike multiple sclerosis, which seems to be more common in people who live further from the equator, “it doesn’t spare any ethnicity, country, or border,” says David Taylor of ALS Canada. The rates of ALS seem to be increasing slightly, although it’s hard to say why; part of the reason is thought to be that people are simply living longer, and that doctors are getting better at diagnosing it.

At Sunnybrook’s ALS clinic, which is the biggest in Canada and one of the largest in the world, a multidisciplinary team—including an occupational therapist, a speech-language pathologist, a dietician, a respirologist and others—sees patients regularly as the disease progresses, providing equipment, helping them with swallowing techniques, or working on new ways to communicate. Once the ability to eat and breathe is compromised, patients must decide whether to be hooked up to a ventilator and feeding tube. “I’ve had friends who became completely dependent on machinery,” says Melanie York. (Because of the cost of equipment, York says, ALS is often referred to as the “bankruptcy disease.”)

The risk factors remain unclear. Old age is one, “although I just diagnosed a 28-year-old this week,” Zinman says. Men seem to be at slightly increased risk until age 70, but then it evens out. People who served in the military have a twofold increased risk of getting ALS, for reasons that are unknown. (The Canadian government has recognized this elevated risk and pays out pensions to veterans suffering from ALS.) Robertson recently acquired the brain and spinal cord of a Canadian military vet who died of ALS, to her knowledge the first veteran that will be studied in this way.

Other risk factors that seem to be emerging are equally baffing: “Italian soccer players have a higher instance of ALS,” Robertson notes—and not football or hockey players, for whom head trauma and the dementias are more common. Within the same family, certain members will develop ALS, while others will not. “There must be environmental triggers” that interact with genes, Zinman says, but we still don’t understand what they are.

It was only in 1993 that scientists discovered the first gene implicated in ALS, called SOD1; mutations in this gene are responsible for one or two per cent of all cases. They created a mouse that expresses the mutant human gene, giving them a lab model to study. “That’s all we had, until 2008,” Robertson says, when another gene was found.

Today researchers know of seven genes implicated in ALS, including one called C9orf72, C9 for short (Rogaeva and Zinman helped discover it). C9 seems to be involved in both ALS and frontotemporal dementia, the second-most-common form of dementia after Alzheimer’s. Today, ALS and frontotemporal dementia are thought of as existing on a continuum—a “disease spectrum,” as Robertson puts it.

Sitting at her desk, Robertson pulls out a fat binder containing autopsy reports. “In 2006, the diagnosis was ALS,” she says. “If I skip forward to now, we’re investigating brains and realizing there’s a whole lot going on. We might see ALS with mild Alzheimer changes,” she continues. Although it was traditionally thought that ALS leaves the mind intact, about half of patients show signs of cognitive impairment, some meeting the full criteria for a diagnosis of frontotemporal dementia as well, she says. This surprising find is changing the way patients are treated.

One of the most important goals of this research is to find better biomarkers—signs in the blood, the cerebrospinal fluid, or brain imaging, that something may be amiss long before symptoms present themselves. Diseases of the brain aren’t like diabetes, where a simple blood test can reveal the issue. In the case of ALS, diagnosis “can take up to two years,” Robertson says. By that time, it’s estimated that 60 per cent of a patient’s neurons are already lost.

Even better would be finding a way to prevent the onset of ALS altogether. Alzheimer’s researchers are exploring this, too. Years of work have gone into developing a drug to fight that disease, but trial after trial has failed; some wonder if the drugs are being administered too late, when the brain is already riddled with toxic protein deposits. “There’s been a shift in thinking,” says neurobiologist Ken Kosik of the University of California at Santa Barbara. “Maybe we have to treat the disease before it strikes.”

Since the nineties, Kosik’s been studying a sprawling Colombian family with an extremely rare genetic mutation, one that guarantees those who carry it will be struck down by early onset Alzheimer’s. If a parent has it, there’s a 50 per cent chance their child will, too. “It happens like clockwork, around age 45,” Kosik says. “We know who’s going to get it, because we can detect the mutation even in utero.” About 300 members of this family, age 30 or older, have been enrolled in a clinical trial, the first of its kind, one that administers an anti-Alzheimer’s immunization called crenezumab before they show symptoms of the disease.

Like Alzheimer’s, ALS researchers are trying an immunization approach. A breakthrough might come from studies not in mice or in humans, but in dogs, the only other animals we know of with a naturally occurring form of ALS. In 2009, researchers at the University of Missouri discovered that a dog disease called canine degenerative myelopathy is caused by mutations in the SOD1 gene—the same one linked to ALS. Certain breeds, like Pembroke Welsh corgis, German shepherds and boxers, are especially vulnerable. Robertson is collaborating with the Missouri scientists to see whether an immunization that targets protein misfolding could help the dogs. If it proves a success, maybe it will lead to a breakthrough for humans.

Years ago, when Melanie York first started coming to the ALS clinic for her appointments, she’d avoid other patients, she says, not wanting to be confronted with the realities of the disease. Now she chairs the support group there. “They say ALS happens to good people,” York says, “smart people, nice people. And we’ve gone around the room and said, what do you think? What might have brought it on?” With no family history, they point to stress, or maybe exposure to chemicals, as a possible culprit. “But I think most of us scratch our heads,” she says. “We don’t know. We really don’t know.”