Vegetarians, divided: The rise of the flexitarian 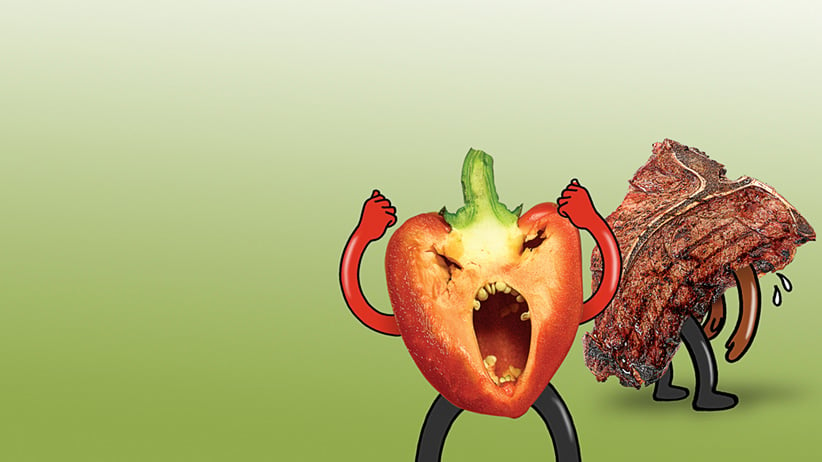 When Annabelle Randles’s friends throw dinner parties, they’re unsure whether to invite her. When she attends vegan trade shows to represent By Nature, her U.K.-based organic-products online store, and tells her customers she’s not vegan, she gets strange looks. And when she posts recipes with meat on her blog, The Flexitarian, she feels the wrath of her hard-core vegetarian readers. “You need to tread lightly,” she says.

Randles, as the name of her blog implies, is among the growing ranks of people who consciously reduce their meat consumption without cutting it out entirely. “Omnivores don’t really understand,” says Randles, who grew up in a carnivorous French family before adopting a flex diet several years ago. Its allure: Eat healthier, prevent animal suffering and fight climate change without the awkwardness of requesting alternative dishes at social events or sacrificing the occasional bacon cheeseburger. “Sometimes you meet people and explain. They have this blank look and then they’re like, ‘Oh, that’s what I am!’ ”

It’s hard to say how many people are flexitarian, but with such a low bar for entry—and an endless list of diets such as Meatless Mondays, Vegan Before 6 and Part-Time Carnivore—the figure likely exceeds the four per cent of Canadians who are vegetarian or vegan. And it’s these “part-time vegans,” perhaps more so than diehards, who are bringing veggie options to restaurants and tofu-everything to supermarket shelves. According to research firm Mintel, vegetarian products accounted for 12 per cent of new foods worldwide in 2013, up from six per cent in 2009. In the U.S., avocado sales have quadrupled since 2000 and kale production shot up nearly 60 per cent between 2007 and 2012. Like McDonald’s meatless wraps or Ikea’s new vegan meatballs? Thank a flexitarian.

The trend is similarly buoying Canada’s booming vegetarian dining scene. Survey the patrons of Vancouver’s The Acorn, Toronto’s new spot Dandylion, or Montreal’s Aux Vivres, and you’ll likely find more meat-eating gourmands than greens-and-granola vegans. The same crossover crowd has propelled vegan blogs and cookbooks such as author Angela Liddon’s wildly successful Oh She Glows onto the New York Times bestseller list. “I don’t think a huge part of my readership is actually strictly vegan,” says Dreena Burton, a Vancouver vegan author and founder of the Plant-Powered Kitchen blog. “I hear all the time, ‘We’re not fully vegan, but . . .’ ” Still, despite their plant-positive influence, flexitarians are finding themselves in the heat of a battle for moral superiority, under fire from both carnivores and vegans. “People love to dive into the controversy,” Burton explains. “For some people, vegan is a very defined term and you have to respect what it has meant for so long . . . It’s more than just diet.” The 540 comments on Liddon’s post about her newborn’s diet, for example, are a bitter back-and-forth about the “hijacking” of veganism. “You’re an omnivore,” reads a response to a self-described “mostly vegan” commenter. “Done. Simple as that. Stop giving yourself an unearned title.”

The backlash isn’t only online. In 2013, Le Commensal, a vegetarian chain with restaurants in Quebec and Toronto, adopted a flexitarian menu to attract more customers. They ended up alienating their existing clientele; some loyal fans boycotted the place (one called the decision “pathetic and unethical”), and it filed for bankruptcy soon after. “What do they expect?” one tweet read. “It’s insulting to its veg supporters.” Meanwhile, the Bickford Flexitarian, a restaurant in Toronto, survived a mere year.

The beef (pun totally intended) between vegans and meat-eaters is part of what inspired New Yorker Brian Kateman to found the Reducetarian movement, a flex effort with a semantic makeover. He became a flexitarian a while ago and, “before I knew it, I had all these uncomfortable words to describe something that seemed so simple to me: eating less meat.” Drama aside, Kateman says, the obsession with labels is waning. “There are a lot of people who realize this all-or-nothing mindset is quite silly.” After all, moderation is hardly new. Didn’t that Aristotle guy say something about this?