Want to get healthy? Vigorous exercise alone won't cut it. 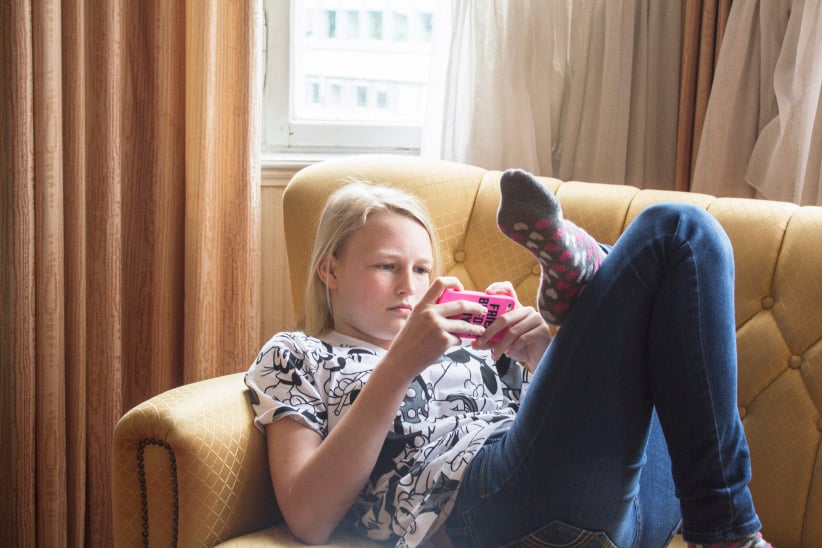 Teen using a smartphone on the couch. (Johner Images/Getty)

For 14-year-old Hannah Robertson of Kilbride, Ont., field hockey practice on Saturday morning involves playing every position at once and drinking four litres of water, as her team has no goalie and the field has no shade. After training, upon finishing the cool-down run and push-ups, Hannah spends most of the remaining day sitting or lying down. In her words, she tends to “chillax.”

Such a schedule is common for young people, who prioritize a single session of vigorous exercise without concern for the rest of the day. However, the 24-Hour Movement Guidelines for Children and Youth, released last month, shift the paradigm by advising that the whole day matters. The guidelines break down the agenda into “sweat,” “step,” “sit” and “sleep.” The first portion involves a recommendation of 60-minutes of heart-pumping exercise, three days per week. The “step” portion entails several hours of light activity such as walking, casual cycling or chores. The “sit” portion involves no more than two hours of screen time, and not immediately before the eight to 11 hours of sleep.

“The message we’ve been chanting in slightly different tunes over the past 40 years is ‘we need to get more [vigorous] exercise,’” says Mark Tremblay, chief scientific officer for the guidelines, released by the Canadian Society for Exercise Psychology and ParticipACTION. “Somehow we’ve conditioned ourselves to believe that’s all that matters.” Tremblay’s team worked on the guidelines for seven years, reviewing research from 69 countries and analyzing data from 4,169 young Canadians. “It’s a re-conceptualization of movement as a whole,” he says, “instead of fragmented, the way we have thought about it, talked about it, even studied it.”

The old messaging faltered because vigorous activity alone cannot produce good health. Each hour of sedentary time reduces sleep, which in turn hinders brain development. In other words, an apple a day doesn’t keep the doctor away if the rest of one’s diet is junk. Tremblay says the traditional mentality was “analogous to dismantling Canada’s Food Guide and saying, ‘we’ll have a milk guide, and separate from that we’ll have a grain guide’ … It’s not like I get up and have a bowl of calcium and I’m good for the day.”

For Hannah, dripping sweat at field hockey—and at gymnastics during the week—doesn’t guarantee a healthy lifestyle. She’s usually sleep-deprived, as she stays up late doing homework because she’s distracted by Snapchat or Instagram. “As screens migrate into the bedroom, as cell phones migrate under the pillow,” says Tremblay, “sleep has declined by an hour in the last century, and the quality of sleep has declined.” Elio Antunes, president of ParticipACTION, echoes, “we’re on the verge of a sleepidemic.”

The 24-Hour Movement Guidelines encourage young people to keep screens away before bedtime and get eight to 11 hours of sleep. Although youth and parents have heard similar recommendations from a deluge of sources, Tremblay says the guidelines are a more credible benchmark. “Otherwise it’s very rogue,” he says. “It’s [advice from] whatever website you might stumble across on the Internet.”

Some teachers are already helping students meet the “step” guidelines without knowing it. Katie McClelland is a math, science and English teacher in Mississauga, Ont. Throughout the day, she gets students to walk to the library, do push-ups when eliminated from math games, and spin on stationary bikes while reading. “It’s very easy to sneak those things in,” she says. Her school offers a program called Actively Committed to Excellence (ACE), which replaces first period with a circuit of yoga and other activities. Students must therefore complete their regular course load in less time. “What we’ve found is that they can handle it,” says McClelland. With morning exercise, she says, “the body seems to work like a more well-oiled machine.”

The old, sweat-prioritizing message was also ineffective for non-athletic people. Even the language of “get out and play” still favoured exercise, and ParticipACTION’s annual report card, which was released with the guidelines, still gave Canadian young people a D+ in active play and an F in sedentary behaviours. “That messaging works at best for one-third of the population,” says Tremblay. “That’s all it ever has worked for.” Meanwhile, people who aren’t coordinated or fit – who don’t want to join a basketball club or go rock climbing – could more easily be convinced to go to bed early and go shopping or walk to school with friends. As examples of creative “step” activities, Antunes knows families who turn on music in the kitchen and dance while preparing dinner.

However, the inclusive messaging risks watering down what it means to “sweat.” Hannah’s mother, Sarah Robertson, is a phys ed teacher in Aldershot, Ont. “I think if we go too far away from vigorous, it will lower the bar a little bit for overall health,” she says. “In some ways, you bring down the bar of vigour to bring up the bar of participation.” Instead of teaching sports, physical education curricula have trended toward “Teaching Games For Understanding,” or TGFUs. Under the new curricula, Robertson no longer teaches badminton with nets, birdies or racquets, which would be “barriers to success,” but rather gets students to hit foam balls with their hands. They practice ultimate Frisbee by throwing around a rubber chicken. “You take away the barrier of that sport, which is catching and throwing a disk,” she says. “It’s a lot easier to catch a rubber chicken than it is to catch a Frisbee.”

In coming years, Tremblay hopes to create movement guidelines for adults. Although the guidelines would differ in hours allocated to sweat, step, sleep and sit, they would take the same premise of using “step” time to interrupt sitting, especially in offices. “If nothing else, go pick up a dust bunny and sit back down,” Tremblay urges. He notes that adults usually don’t compensate for days stuck in cars or airplanes, and everyone should try to break up the sitting during those journeys, no matter their age. “It’s a bad idea to load up the kids in the car to drive to Grandma’s and see if you can make it in five hours without a pee break,” he says.

Adults also need encouragement to let their children go outside without worrying about safety or weather. Tremblay notes that most children in Finland bike or walk to school, even when it’s dark. “They don’t have security guards,” he says. “They don’t get abducted.” Meanwhile, Antunes notes that some Canadian schools have banned balls and built boring playgrounds as safety precautions. “We need to build our environments as safe as necessary versus safe as possible,” he says. Canadians also mustn’t fear the cold. Although not specified in the report, young people should follow the four guidelines year-round. “We need to embrace all that Canada has to offer,” says Antunes, “which is four seasons.”