When a doctor has Hep C 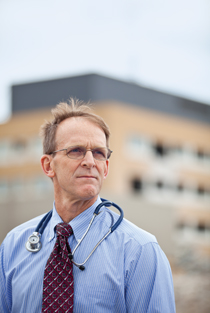 In the early 1980s, just as AIDS was emerging along with the surgical precautions that came with it, Dr. Wayne Gregory was a resident at Sunnybrook Hospital in Toronto. Back then, he says, “We were the only trauma centre in Toronto.” So he learned the art of medicine on gunshot victims and patients severely injured in car crashes. At the end of his shifts, the surgeon from Brampton, Ont., now 57, recalls, “I remember frequently coming home and changing out of my greens, and my underwear would be soaked in blood.”

Over 30 years later, in 2009, the College of Physicians and Surgeons of Ontario (CPSO) introduced a contentious practice regarding surgeons and diseases transmitted through blood. The college, like its counterparts in B.C. and Saskatchewan, started asking doctors who do exposure-prone procedures—where there is a risk of exposing a patient to a doctor’s blood, usually through a needle prick or scalpel cut—to declare whether they’ve been tested for blood-borne infections on their annual licence-renewal forms.

Gregory answered honestly: he hadn’t. In his years of opening up patients’ chests and abdominal cavities, he never got screened for HIV or hepatitis C, and only once for hep B. “You wouldn’t automatically get tested,” he says. “A lot of people get tested if they are applying for insurance. But just for screening purposes, it’s not routine among surgeons.”

About four months later, in September 2009, the college asked Gregory to get blood work. From all appearances, the doctor was in top shape—a workout fanatic who had represented Canada at the World Dragon Boat Championships since 2005—but he discovered he had hepatitis C. The sometimes silent infection that attacks the liver mostly occurs in injection-drug users or in people who received tainted blood transfusions or who are from countries where the infection is endemic. Gregory’s only risk for transmission was his work. He suspects he caught the blood-borne virus during his residency at Sunnybrook, before it was identified in 1989.

When most people learn they have hep C, they worry about their personal health and what comes next. But what happens when a surgeon gets sick? What is the risk to a patient, and do the benefits of an infected doctor’s continued service outweigh the possibility of harm to those he treats? What should he tell his colleagues, his patients? These questions are mostly left to provincial medical regulators to answer, a key part of the delicate dance they perform around protecting both the public and the medical profession. According to Gregory, the CPSO failed on both fronts, and so badly, that he decided to do what doctors rarely do and go public with his health status.

After he reported his infection, the college assembled an expert panel to review his case. Gregory went to see specialists to find out more about the potentially deadly disease. The major concern with hep C is that it can lead to cirrhosis and liver cancer. But Gregory found out his liver function was normal and that there was next-to-no chance he’d develop cirrhosis in the next five years. The only treatment options involve interferon, an antiviral injection that can be as debilitating as chemotherapy and is not always effective. So Gregory decided to wait for the less toxic, oral antiviral regimens that are expected to become available in the next few years.

Both the U.S. Centers for Disease Control and Prevention and the American College of Surgeons say hep C doctors can continue doing major surgeries even if they are not on treatment because the risk of transmission is so low. There’s no nationwide policy in Canada, but Gregory was reasonably confident the college would allow him to continue to operate. As he explains, “A previous CPSO president [Dr. Jack Mandel] said—when they started to institute the policy of mandatory testing—that if a surgeon tests positive, the college will assess the surgeon’s risk in detail and decide how to deal with it.”

In May 2011, a year and a half after learning about Gregory’s hep C status, the CPSO restricted the surgeon’s practice with 12 hours’ notice. He was barred from doing the major operations—the aortic aneurysm repairs, thoracotomies, amputations and arterial surgeries—that accounted for nearly half of his work and income. “If there was any immediate danger [to the public], they should have done something sooner,” he says. In a letter to the college, Gregory wrote, “No attempt was made to calculate my individual risk of infecting a patient . . . and the infectious disease ‘expert’ on my panel concluded, ‘in this limited time frame, I cannot assess Dr. Gregory’s risk.’ ”

By September, the CPSO scheduled a fitness-to-practice hearing—for December. That meant eight months of what Gregory calls “semi-retirement.” He found other surgeons to take his patients, and referrals slowed down. The college told him he could go back to full practice while on an anti-hepatitis therapy if his viral load became undetectable. So, despite his reservations, he started treatment.

The interferon has made Gregory sick. He wakes up every day feeling hungover and tired. He’s become severely hypothyroid, his skin has a grey cast and he looks shrunken in his clothes. “I get short of breath going up a simple flight of stairs,” he says. On March 30, 2012, after a number of blood tests showed that the virus was undetectable, the college lifted the restrictions on him. He could go back to his full spectrum of work as a surgeon.

Medicine is an exercise of weighing risks and rewards, benefits and harms. According to the Centers for Disease Control, the risk of infection with hep C after a needle injury or cut is two per cent. A surgeon’s chance of infecting a patient depends on his level of experience, viral load, type of practice and patient profile.

In Canada, since the arrival of antiviral therapies and the introduction of universal precautions in the wake of AIDS—avoiding contact with patients’ bodily fluids by using gloves, gowns and masks—there have never been any documented cases of transmission of either HIV or hep C from physicians to patients.

Still, for some medical regulators, even a one in 100,000 chance of infecting a patient is too much. According to Gregory, the CPSO’s expert panel said, “In my case, any preventable risk is unacceptable.” The college couldn’t comment on Gregory’s case, though a spokesperson said it “uses the best available information” when evaluating the practices of infected physicians.

This June, the CPSO came out with an updated policy on blood-borne diseases. By next year, all doctors who perform or even assist with exposure-prone procedures will need to have their blood tested annually. (It was an ethical obligation before, but never an annual requirement spelled out in the college’s policy.) CPSO council president Dr. Robert Byrick says, “Our own experience is that physicians were not testing regularly when only the ethical obligation was presented to them, so this will give us an opportunity to assess the value of annual testing for two years.” At that point, the college will decide whether to continue with mandatory screening.

Some observers say stricter policies may actually have the opposite of the desired effect. As Dr. Yves Robert, president of the Federation of Medical Regulatory Authorities of Canada, which represents all the provincial medical regulators in this country, puts it, “We will never be able to control the risk and there is a danger of being too intrusive and too aggressive, which may drive the risk underground or give a false sense of security.” There is little protection and support in place for physicians who have to stop working because of a virus, which Dr. John Haggie, president of the Canadian Medical Association, says leaves them in a tough place: “They have to weigh their health against their career against the theoretical risk to a patient.”

Robert suggests the example of the Collège des Médecins du Québec is instructive. The Québec college does not recommend mandatory screening of surgeons because, according to its position statement, it’s “medically unnecessary and potentially harmful.” Instead, surgeons are advised to know their blood-borne infection status and manage their own risk.

If they test positive for such a disease, they go to the Blood-Borne Infection Risk Assessment Unit—notably not the college—which specializes in measuring risk for health professionals. The idea is that the scientists making evidence-based decisions can advise the college about what to do with infected doctors, independent of the legal considerations medical regulators face. A spokesperson at the unit explains that hep C-infected surgeons aren’t always restricted from doing major surgeries.

Quebec is not alone in its approach. The Canadian Medical Association, National Institutes of Health and the Centers for Disease Control in the U.S. recommend against mandatory testing. The Society of Health Care Epidemiologists of America—which the CPSO uses as the gold standard for management of blood-borne pathogens—also does not recommend mandatory testing. The Ontario Medical Association says physicians do not have the right to know if patients are infected with blood-borne viruses, and questions why this standard is not reciprocated.

Still, there’s near-universal agreement that surgeons who do exposure-prone procedures should know their blood-borne infection status so they can take extra safety measures if necessary. As Robert noted, “Universal precautions are more effective for general prevention [than mandatory screening], mostly for those blood-borne pathogens we don’t know yet.” Once Gregory learned he had hep C, “I was double gloving, not touching the needle, so there’d be less chance of any injury.”

For now, the former athlete is unable to reconcile himself to the fact that in order to work he is on a treatment that has left him debilitated. “If a new surgeon asks me—does he think he should get tested [for hep C]—I would say no because of the rigid stand the college takes on it and the fact that the treatment for it carries significant toxicity.”

He will need to be tested again, six months after going off the hep C drugs in March next year. At that point, the virus typically reoccurs in 30 to 40 per cent of patients with his genotype. If that happens, Gregory will once more be barred from using the skills he spent a lifetime honing.

See also: Should we make surgeons get tested for HIV, hep B and hep C?

FILED UNDER: College of Physicians and Surgeons of Ontario Hepatitis C Wayne Gregory