When the plague won: a history of vaccine hesitancy

In Montreal in 1885, disease and vaccine resistance mixed with devastating results, not unfamiliar to today 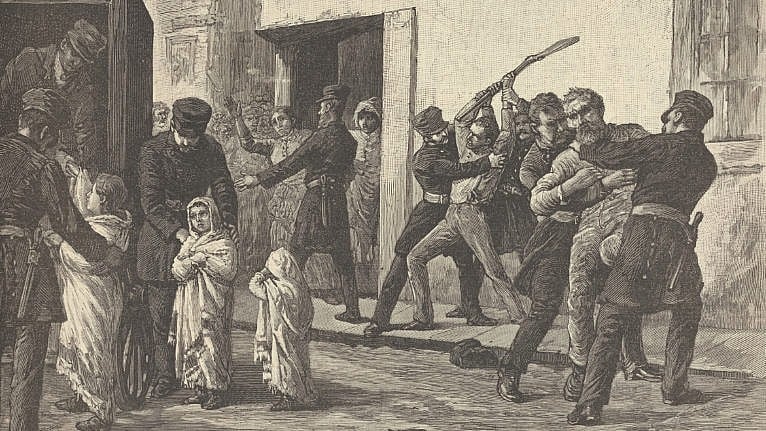 An illustration from Harper’s Weekly, Nov. 28, 1885: “An incident of the smallpox epidemic in Montreal,” by Robert Harris (Courtesy of The New York Public Library)

In the spring of 1885 at Montreal’s Natural History Society, Dr. J.B. McConnell delivered a lecture on the history of epidemics and the cutting-edge science that was then posting rapid advances in understanding them. When McConnell finished speaking, he invited audience members to line up for a peek through his microscope at a cholera-causing bacterium, magnified 800 times, taken from an actual patient. It was only the previous year that a German researcher had pinpointed the microorganism that caused that fearsome disease.

Michael Bliss sketches this lecture-hall scene early in his 1991 history Plague: A Story of Smallpox in Montreal to show how the spirit of Victorian-era progress was very much present in what was then Canada’s biggest city. It happens that around the time of McConnell’s talk, Montreal’s English newspapers had begun to publish “little notes of alarm” about a handful of newly reported smallpox cases. The outbreak, still seemingly minor, started with a Pullman conductor, George Longley, who carried the virus with him on the train from Chicago. Worried health officials tried to isolate Longley at the Hôtel-Dieu hospital, but their efforts, it turned out, fell disastrously short.

The results would be horrific. Bliss’s tour-de-force account gathers momentum as the epidemic death toll mounts. Smallpox took 3,234 lives, or 1.89 per cent of Montreal’s population, during that plague year. “It was the last uncontrolled holocaust of smallpox in a modern city,” Bliss writes. And this unfolded, astoundingly, nearly 90 years after Edward Jenner published his landmark work on vaccinating against smallpox in England. In fact, the vast majority of Montreal’s English-speaking population, living mostly in the city’s west end, rushed to be vaccinated, and thus were barely touched by the epidemic. But the generally poorer French Canadians in the east end—a world away from McConnell’s microscope—resisted vaccination. They suffered 90 per cent of the deaths, overwhelmingly among children under 10.

By the time he was writing Plague, Bliss, a long-time professor at the University of Toronto, was winning wide admiration for the writerly flair with which he brought his meticulous research into medical history to life. He found plenty to work with in 19th-century Montreal, from the costumes of Catholic processions as they snaked through the cramped streets—instantly recognizable as “superspreader” events to any reader today—to the melee when city police, including the formidable Louis Cyr, who would later win fame as “the world’s strongest man,” were sent to haul infected tenement-dwellers off to the smallpox hospital and ended up in pitched battles with family members of the sick who mounted spirited resistance.

The preoccupation that bound this carnival together was the gulf between the mindset of that lecture hall, where progressive citizens absorbed the latest science, and the mentality of the working-poor precincts, where city health authorities ran up against deep-seated hostility. It’s this divide that makes Plague particularly gripping reading during the second year of the COVID-19 pandemic. The complexities of what we now rather delicately call “vaccine hesitancy” are not much different from the knot of factors Bliss struggles to untangle—class and religion, ethnic and racial identity, competing news media cultures, the claims of science and the counterclaims of charlatans.

It’s hard to read Plague in 2021 without keeping a running mental tally of then-and-now parallels. For instance, Bliss pays close attention to the divide, running roughly along Montreal’s linguistic fault line, between the city’s five French and four English newspapers, which echoes the split that was so evident early in the COVID-19 pandemic in the U.S. between informed mainstream-media alarm and Fox News-led give-me-a-break-ism. “The French press, unconvinced that smallpox was serious, poured scorn on sensation-seeking English papers,” Bliss writes. We know all too well how that sounds.

He also tracks skirmishes between business interests and medical experts, another familiar dynamic from the present pandemic. By the spring of 1885, the grave danger the spread of smallpox posed in Montreal should have been obvious, but hotel owners were lobbying city health officials, as summer approached, to stop briefing journalists on the epidemic data because bad publicity was threatening the seasonal tourist trade.

The 19th century’s anti-vaxxers often make the 21st century’s look pallid by comparison. Dr. Joseph Coderre, a respected physician-professor, not only claimed the smallpox vaccine wouldn’t prevent smallpox, he warned it would cause syphilis. In the end, though, Bliss puts less emphasis on those singular retrograde voices than on the underlying popular sentiments that so sharply delineated the English west end from the French east end: “One group was terrified of the disease, ran and hid from it, got vaccinated, and supported its forcible suppression. The other group accepted the presence in its midst of one of God’s scourges that sadly carries off some of the children de temps en temps.”

Bliss notes that Montreal’s powerful Catholic Church hierarchy eventually came down in favour of vaccination. When the epidemic’s severity was no longer debatable, previously skeptical French papers adopted a pro-vaccine stance. Still, large numbers of French Canadians never bought in. “Vaccinophobia got reinforced by anglophobia until for some lower-class French Canadians hatred of the English and hatred of vaccination seemed to go together,” Bliss concludes in a key passage, adding, “You resisted the oppressors and all their works.”

This is arguably the central insight of Plague when it comes to reflecting on resistance to not only vaccination but also other preventive measures deemed necessary by science. The wariness of many French Canadians was one manifestation of their broader distrust of English-speaking elites. Something similar seems to be behind polls and anecdotal reports of higher COVID-19 vaccine hesitancy among minority groups in many countries, including, for instance, Indigenous peoples in Canada and African American communities in the U.S.

Seeking to explain this pattern, some commentators point to well-documented historic cases when health researchers or practitioners have failed minority communities or cynically exploited them. But others, notably New York Times columnist Charles M. Blow, say even the most shocking historic episodes—like a 1932-1972 syphilis research project that treated Black men as expendable—tend not to be widely enough known to be driving polling data that show a disproportionate share of African Americans are not inclined to get a COVID-19 shot. “It occurs to me,” Blow says, “that something bigger might be contributing to those numbers: an overall mistrust of a government that has repeatedly disappointed, disrespected and dehumanized Black people.”

Bliss drives toward a similar point in Plague by focusing on a big news story of 1885 that might seem to have little to do with smallpox: Louis Riel’s rebellion, trial and execution. In the spring of that year, as smallpox began its assault on Montreal’s east end, Riel set up his Métis provisional government on the Prairies, then fought a two-month resistance against the Canadian militia, before finally surrendering. Bliss sums up: “Riel was French-speaking, of French blood and insanely Catholic.” Some English newspapers in Montreal took the opportunity to print jingoistic anti-French, anti-Catholic bile. By the time he was hanged on Nov. 16, Riel was a potent symbol of French Canadian, Catholic aspiration. Thousands took to the streets of Montreal in demonstrations that continued nightly for nearly a week, culminating in a mass gathering of more than 20,000 to listen to orators condemn the government in Ottawa for going through with Riel’s execution. The sudden emergence of identity-defining street demonstrations in the middle of a dire public health crisis reminded me of the protests that temporarily eclipsed pandemic news last spring and summer in the wake of the police murder of George Floyd.

Bliss pairs the reaction to Riel’s death with the smallpox epidemic as “the two phenomena that drove English- and French-speaking Montrealers apart that year.” However, like the often sympathetic media reaction to the Black Lives Matter protests last spring and summer, Montreal’s English newspapers weren’t blind to what was behind the popular outrage over Riel’s sentence, and respected the orderliness of the street demonstrations that followed. The Gazette called them “refreshing.”

In the end, cases of smallpox dwindled in the waning weeks of 1885. “It was not until the flames burned very low in November and December—that is, until the smallpox ran out of unvaccinated hosts—that the containment strategy appeared to be effective,” Bliss writes.

Montreal wasn’t entirely an outlier in the era when it came to a sizable segment of its population refusing to accept vaccine science. Campaigning against vaccination continued internationally through the 19th century, and the resistance scored a major victory in 1898 when Britain decided that “conscientious objectors” would be excused from otherwise compulsory vaccines. “The more we learn about the history of vaccination,” Bliss writes, “the more we find that it was widely resisted.”