Most Canadians support physician-assisted death. So does the Supreme Court. And the federal parties? Hard to say, with a deadline to act looming 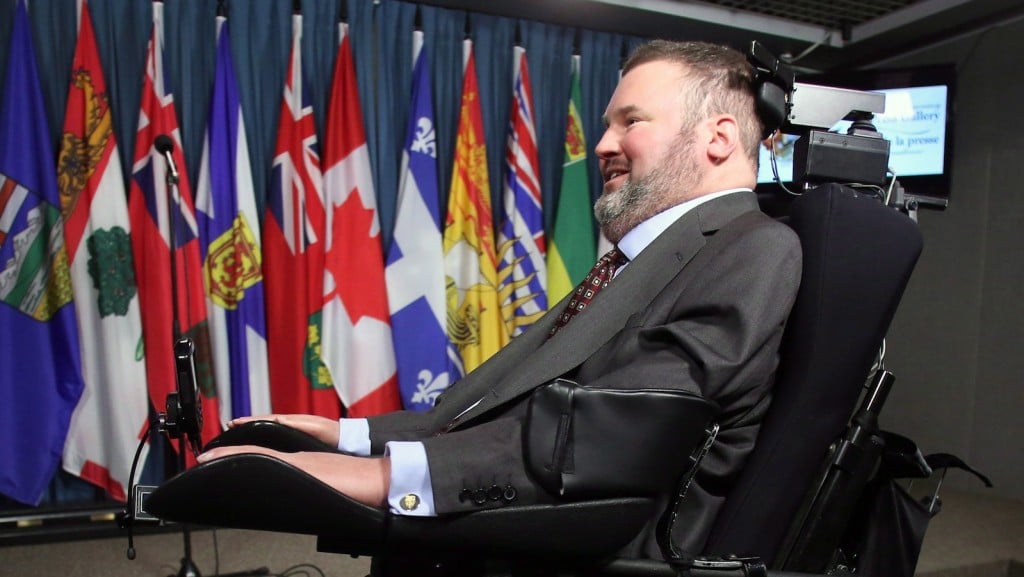 Whenever Steven Fletcher, Conservative MP in the Winnipeg riding of Charleswood–St. James–Assiniboia–Headingley, goes door-knocking during this election campaign, one issue keeps coming up among his constituents: death. In particular, physician-assisted death—which the Supreme Court of Canada ruled last February should no longer be prohibited under the Criminal Code. In its decision, the court gave the federal and provincial governments one year to develop new legislation and protocols for medical doctors to aid terminally ill patients who wish to end their lives.

“I am amazed at how many people are in tune on the issue,” says Fletcher, who has been the leading voice in Parliament in support of physician-assisted death, having introduced two private member’s bills about the matter. “It doesn’t matter what their socioeconomic background, their ethnicity, their ability to speak English—they are aware of the issue and they want to talk about it.”

Fletcher, who became the first quadriplegic elected to the House of Commons in 2004, reports that almost everyone he meets while campaigning says the same thing: “The vast majority are in favour of it­­; they want to have the option,” he says. “It does bring peace of mind to many people that they’re not going to have a terrible end.”

It’s also a top-rated election issue on a list of high-priority concerns among Canadians recently surveyed—ahead of issues such as gun control, a national child care program, and the future of Canada’s mission against Islamic State in Iraq and Syria.

Related: Try Maclean’s Policy Face-Off Machine to find the policies that matter to you

In a way, physician-assisted death should be a slam-dunk for the federal parties: Most Canadians favour its legalization, the highest court in Canada has provided a legal framework for its implementation, and many of the provinces and territories have already joined a nationwide panel to study legislative options and best practices. And yet, when the topic came up during the French-language debate last week—which was held in Quebec, where physician-assisted death was first legalized in Canada—the federal party leaders were far less clear than Canadians about their position. Morris was struck by the inconsistency and vagueness of their comments. “We’re not getting the same messaging from our politicians,” she says.

In French, Conservative Leader Stephen Harper was blunt: “Certainly, we must modify the Criminal Code in accordance with the Supreme Court decision, and we will do so.” But Harper’s message has been ambiguous in English, says Morris: “He focuses more on the controversy, on the difficulty of the issue, and his actions really belie an intent to move forward.”

The comments made by NDP Leader Tom Mulcair were also puzzling. Mulcair has said the NDP would move quickly to bring forth legislation on assisted dying, but may require an extension from the Supreme Court. During the debate, Mulcair celebrated Quebec’s work, and said “the NDP will have a free vote” on the matter. That’s perplexed advocates such as Morris: “The debate’s over. The Supreme Court has said this is what needs to happen.”

The Liberal party has been careful­­ in its wording. During the debate, Justin Trudeau promised to “protect the most vulnerable, but also respect the rights and liberties of all.” He called Quebec’s handling of the issue an “extraordinary example.” Green Party Leader Elizabeth May, who previously told Dying with Dignity that “Green MPs will support changes to the Criminal Code to allow for physicians to assist death within the framework laid out by the Supreme court of Canada,” pointed out how little has been done since the ruling was made.

It’s increasingly clear that the federal government—whatever form it takes after the election on Oct. 19—will be hard-pressed to meet the February deadline to make changes that reflect the Supreme Court order, such as amending the Criminal Code. “It would be a legislative miracle,” says Fletcher. “The government has to form, then people need to be briefed on their portfolios, then legislation has to be drafted, not to mention that Canadians should be consulted.” That means an extension may, indeed, be required. “There may be a period where there is no federal legislation on this specific issue,” he says, “or it may be left up to the provinces.”

For Fletcher, 43, physician-assisted death is more than a political issue—it’s personal. Fletcher became paralyzed from the neck down after he was in a car accident 20 years ago; as soon as he was able to speak, he had a lawyer draft a “living will” that specified his wish to die if his condition deteriorated; the lawyer told Fletcher at the time that his request would probably not be legally enforceable. “I was shocked,” says Fletcher, who recalls asking, “ ‘What do you mean, not enforceable? These are my wishes.’ But, of course, he was right.” Then, in 2012, a steel rod in Fletcher’s neck snapped, threatening his life again. Before surgery, he told the doctors, “Look, if something goes wrong, if I lose my cognitive ability, just walk away from the table.”

Since then, Fletcher is more aware than ever that “anything can happen in life.” He recently published a new book, Master of My Fate, in which he discusses his views on physician-assisted death, among other issues. Fletcher urges Canadians to discuss their views on physician-assisted death with family “around the kitchen table.” Or perhaps on the front porch the next time their local MP comes knocking.