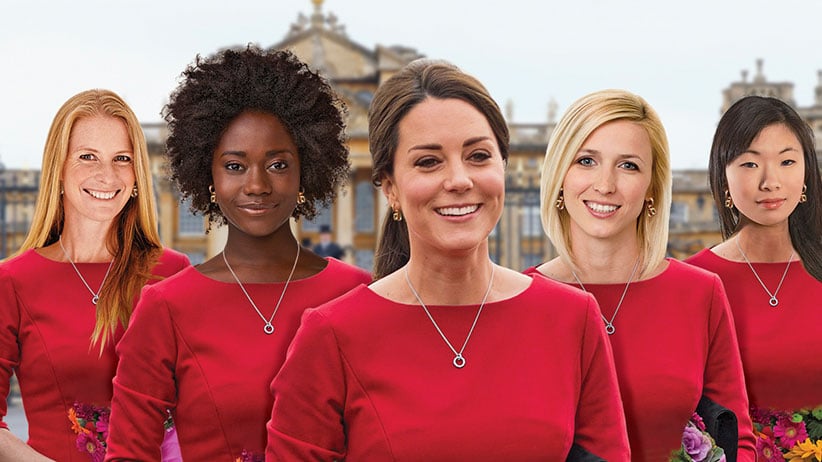 The term repliKate hasn’t made it into dictionaries yet, but it will if Christine OBrien has her way. The Washington-based editor of the What Would Kate Do? blog already has a reference-ready definition: “A piece of clothing that is clearly inspired by something the duchess of Cambridge has worn.” That’s underselling a phenomenon that is chugging along in the blogosphere: recreating the duchess’s every sartorial move—or coming as close to it as possible. While most can’t afford the $1,700 price tag of her grey D-Styling bag from Tod’s, they can snap up a similar version from J.Crew for under $200 or splurge on an L.K. Bennett Rosamund purse for $650 (all prices in U.S. dollars). Kate’s Kiki McDonough green amethyst earrings sell for $2,500. OBrien picked up a version for $25.

Though the first reference in Google using the word “repliKate” appeared a mere six weeks after Prince William and Kate’s 2011 wedding, interest in repliKating really surged after George’s christening in 2013, OBrien reports. “Kate was on maternity leave so royal news was quiet,” she says. “All we could do was repliKate.” According to OBrien and other repliKaters, the phenomenon has only grown more popular.

It’s a communal online hunt that starts the minute Kate steps out in public. A dedicated coterie of fans identify every part of a royal outfit, track down where to buy the pieces, then figure out how to get the same look for less. “There are a lot of people tweeting ideas. ‘Have you seen this one? What do you think about this one?’ ” says OBrien. “If there is a peek of chiffon, we start wondering what chiffon dress it is.” Often, they will have IDs for every part of her outfit—from hat to shoes—as well as where to get repliKated versions, before the real Kate has left the event.

The duchess still wears in public the off-the-rack, reasonably priced outfits that used to dominate her wardrobe. But now she often wears expensive items, such as custom-made coats by Alexander McQueen that are well out of the budgets of fans, which has fuelled the demand for knock-offs. Anna Nowok’s first Kate-inspired purchase was a pair of citrine drop earrings. The popular and prolific Polish blogger had a friend make a $200 version; the original Kiki pair retails for $800. Nowok’s My Small Obsessions Facebook page is a clearing house for images and links to scores of repliKates, including many of the 120 items she’s collected. On What Would Kate Do? there are regular “my royal closet” posts by contributors revelling in their own “royally inspired” wardrobes. 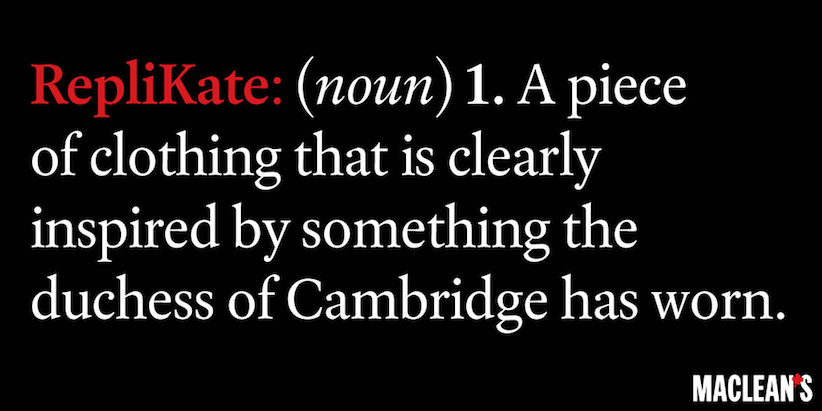 The phenomenon isn’t restricted to Kate; it has now spread to Europe’s stylish royal women. Nowok also tracks down the increasingly fashionable stylings of Sophie, countess of Wessex, who has been spotted in Burberry and Armani lately. And on her Style of Mary blog, dedicated to Denmark’s crown princess, Danish royal-watcher Henriette Schmidt shares her finds.

A large part of the appeal is that today’s royal women actually have public personas that are less outsize, and less carefully managed, than those of Hollywood actresses. “Celebrities usually wear freebies and don’t do any good. I need someone who will inspire me,” Nowok says. “People have become tired of the over-the-top, almost naked, blinged-out celebs,” says Susan Kelley of the authoritative What Kate Wore site. The likes of Taylor Swift and Jennifer Lopez may be fun to watch, but few of us would want to wear their clothes, or could get away with doing so.

Royalty’s more conservative outfits, on the other hand, can help fans define their personal style, Kelley believes. OBrien has bought a lot of repliKated jewellery because the style is both versatile and functional. And for businesses, teasing a royal connection, however tenuous, is good for the bottom line. Macy’s offered a “Kate trench coat” for $360, a far cry from the $3,300 original from Temperley London, What Kate Wore reported.

OBrien doesn’t see the trend waning. After all, there is a precedent. Princess Di’s fashions were tracked for nearly two decades. But living in the social media era, RepliKaters just work faster and more collaboratively as Kate’s royal duties, and wardrobe, grow.