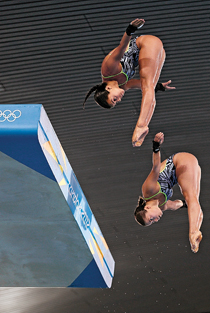 Bronze is not especially easy on the teeth. Émilie Heymans might have mentioned that last Sunday before Jennifer Abel chomped down on her medal for the cameras—a tradition normally reserved for gongs made of more dental-friendly gold. She’s got two bronzes, after all, and this was one of Heymans’s last chances to impart wisdom to the 20-year-old Olympic rookie she’s been leaping and twisting alongside for the better part of two years. The pair had just completed a gutsy, third-place showing in three-metre synchronized diving, and Abel was looking ahead to a career she hopes will be packed with more podium appearances.

Heymans, though, was contemplating life after competition. “Sport is what I’ve been doing since I was six years old,” the 30-year-old mused, sounding a little apprehensive. “I’ll see if I’ll go for another year, or if I’m too tired. I still haven’t made a decision.”

Heymans’s career already stands as a monument to consistency. With the bronze, the lanky athlete from Saint-Lambert, Que., became the first female diver to make the podium in four consecutive Games, starting with a surprise silver in 10-m synchro alongside Anne Montminy at the 2000 Games in Sydney. A bronze would follow in 2004, along with a silver in the individual 10-m in 2008, after which she reinvented herself as a springboard athlete.

But it’s also a symbol of the medal factory that is Canada’s diving program, an unheralded system that accounts for fully 20 per cent of the country’s podium finishes over the last four Olympiads. By Tuesday, Heymans and Abel had been joined in the medal club by Roseline Filion and Meaghan Benfeito, who edged out a British duo to win bronze in 10-m synchro. It was Canada’s ninth diving medal since the 1996 Summer Games in Atlanta, a total that puts Canada on par with Germany, Australia and the United States among the world’s top five diving powers (everyone, of course, trails China). “We’ve got veterans like Émilie and Alexandre Despatie who are still winning and we’ve got young divers like Abel who are coming up,” says Sylvie Bernier, the 1984 Olympic springboard champion and Canada’s assistant chef de mission in London. “Diving has a profile in Canada now. We don’t have to explain to people what it is that we do.”

The gains have been hard won. Bernier’s teary version of O Canada in Los Angeles marked the first time a Canadian diver had reached the podium since 1956. She traces her success back to the 1976 Summer Games, after which hundreds of young Quebecers joined the sport to make use of the facilities at Montreal’s Olympic Park. And when pressed, Bernier will admit that her own big win sent the sport into overdrive: “Every little kid in Quebec wanted to dive,” she says, “or that’s what people told me.”

Twenty years went by until Annie Pelletier’s springboard bronze in 1996—a medal so surprising to observers that it served to highlight the still inexplicable weakness of the national diving program. By then, youngsters inspired by Bernier were old enough to compete on the world stage, notes Mitch Geller, Diving Canada’s chief technical officer, who at the time was coaching some of the nation’s top talents. Yet the international titles and Olympic medals were nowhere to be seen—save the extraordinary performance in Atlanta by Pelletier, a diver mentored in part by Bernier. So that fall, club and national program officials from across the country gathered in Cornwall, Ont., to find a way forward.

The result, says Geller, was a streamlined national system that fast-tracked elite athletes into high-performance programs and put a premium on international podium finishes. “We recognized that being the best in Canada just isn’t good enough,” he recalls. “We needed not to be satisfied.” Geller was put in charge, replacing a network of committees where the emphasis had been on consensus rather than winning. “It wasn’t easy; there was a lot of disagreement,” he says. But the results were hard to dispute: in 2000, Canada qualified seven divers for Sydney and came home with two medals. Four years later, they won two more in Athens, including Heymans’s synchro bronze alongside Blythe Hartley of Calgary.

Success has since begotten vital support. Seven of the team members in London—Abel and Heymans included—received nearly $1.3 million this past year in financial backing from Own the Podium,  the funding partnership that channels money to Canadians likely to win medals. Alexandre Despatie, the two-time silver medallist in men’s springboard, receives additional support from B2ten, a business-funded charity that provides Olympic athletes access to top physical trainers, therapists and equipment. At national team events, corporate logos have begun popping up as sponsors flock to a dynamic sport known for its photogenic athletes.

More importantly, says Geller, the podium finishes have provided young divers with exemplars in the likes of Heymans and Despatie—athletes willing to provide advice. “I’m okay with that role,” Despatie told Maclean’s. “There are rookies on the team who are going to hear our stories. If that gives them an extra push on their journey, then I’ll be happy.” The result, say national program officials, is a level of camaraderie seldom seen in a sport where veterans must battle it out with up-and-comers for Olympic berths and funding. Teammates show up at competitions to cheer each other on, while coaches share pointers with athletes they’re not paid to teach. “These divers genuinely care for each other’s success,” says Geller. “This is a special time for our program, and I hope we can keep it going.”

Indeed, with Heymans and Despatie talking openly about life after diving (the latter is considering a post-athletic shot at acting), all eyes have shifted to Abel’s generation, a cohort that includes the 22-year-old Benfeito, of Montreal; Filion, a 25-year-old from Laval, Que.; and 21-year-old Riley McCormick, a 10-m platform diver from Victoria. Their prospects look good. Tuesday’s bronze capped a medal-filled year for Benfeito and Filion on the international circuit, while McCormick has improved steadily since finishing 16th in Beijing. He reached ninth at the 2011 world championships in Shanghai and soared above his competitors at the Olympic trials in June.

Still, filling the shoes of the program’s elder statesmen won’t be easy—on or off the pool deck. Heymans, for one, is renowned for her capacity to mesh with new synchro partners, even after she’d switched from platform to springboard. She stands fully four inches taller than Abel, length she must move extra quickly to keep up with her partner’s movements. In time, Heymans says, she learned to pace her actions accordingly, while discovering a whole lot of common ground with a diver who was in Grade 3 when Heymans first stepped on an Olympic podium: a will to train hard, a loathing for wasted time and—evidently—a more-than-literal taste for certain kinds of metal.