Hometown Hockey: A doctor to the WHL stars

A coach told him to go to school rather than pursue a hockey career. Mike Bobyn did both. 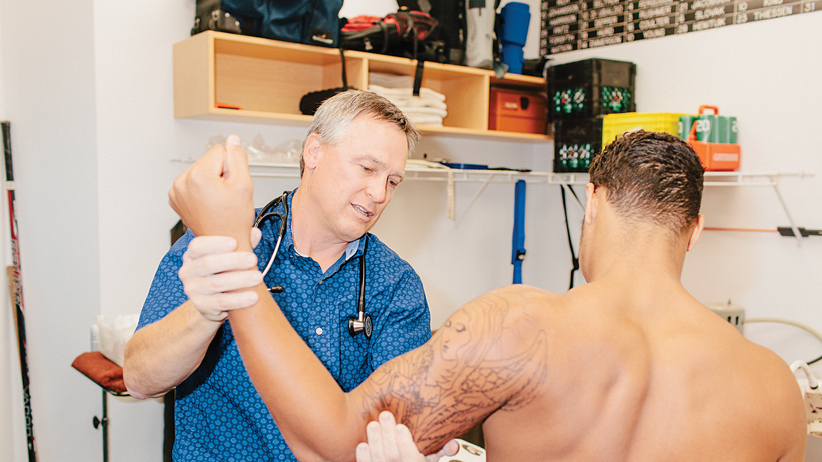 Hometown Hockey, with host Ron MacLean, will stop in 25 towns across Canada throughout the next year. Maclean’s will run stories from the various towns. This week? Kelowna, B.C. The show airs on Sunday on CityTV. For more, visit HometownHockey.com.

Mike Bobyn grew up hanging around hockey arenas—or, more specifically, arena dressing rooms. His father, Patrick, was the team doctor for the Saskatoon Quakers and the Saskatoon Blades, and Bobyn would accompany him to games. “While he was sewing players up, I’d be getting autographs and trying to collect broken sticks,” says Bobyn, now 56.

Bobyn played hockey, too—mostly as a right-winger. He got as far as the Junior A Saskatoon Olympics before leaving the game behind to attend university on the advice of Jack McLeod, then the Blades’ head coach. “That was not very popular with me at the time,” says Bobyn with a laugh. He eventually became a family physician, like his father, and moved to Kelowna, B.C., in 1985.

So it was only natural that when Bobyn heard that Kelowna was getting a major junior hockey team—the Rockets—in 1995, he was excited. He headed down to the club’s main office one day in the hopes of buying season tickets and, by chance, ran into Gavin Hamilton, whose son, Bruce, owned the team. The Hamiltons were also from Saskatoon, and Bobyn had spent most of his minor-hockey career playing against Bruce. Bobyn offered to help them find a team doctor. They asked him to take the job, instead.

Bobyn has served as the Rockets’ team physician ever since. Read about his experiences at Hometown Hockey. For more on the celebration in Kelowna, follow this link.