A tournament of champions, fuelled by girl power

Moncton, N.B.'s Daniel Léger couldn’t find a girls’ peewee team for his daughter. So he started one from scratch. 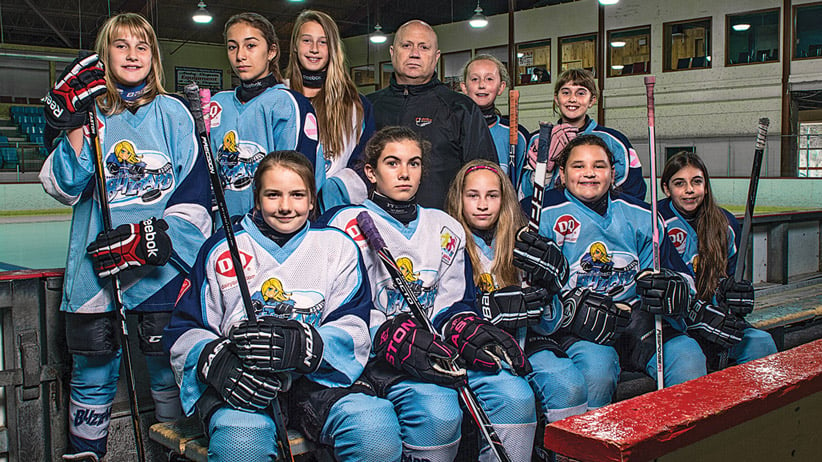 Hometown Hockey, with host Ron MacLean, will stop in 25 towns across Canada throughout the next year. Maclean’s will run stories from the various towns. This week, we head to Moncton, N.B. The show airs on Sunday on CityTV. For more, visit HometownHockey.com.

Daniel Léger was ecstatic when his daughter, Josée, told him she wanted to play hockey. After all, the game had been a vital part of his upbringing in eastern New Brunswick, from his years spent working his way up to Midget AAA with the Moncton Flames to a season suiting up for the Université de Moncton varsity squad. But, a decade ago, when she decided to follow Dad’s lead, he soon found out that the landscape for young female hockey players in the Maritimes was surprisingly barren.

So Léger set out to change that. It would be both an arduous and rewarding process, one that resulted in the West-Kent Female Hockey Association, whose annual tournament draws teams to Moncton from across the country.

Back in the fall of 2004, however, Léger had no such option, so he signed up his eight-year-old with a local Atom boys team—where she had one other female teammate. He quickly began making plans to establish an all-girls peewee team that would begin play the following year, and got the parents of 15 other kids on board. Ice time was hard to come by—an hour a week, at first—and finding consistent games was even harder. Juggling the new endeavour with his job as a registered nurse at a local hospital took up virtually all of his time. But, above all, he believed it would be worth it. “The main reason why I got involved,” Léger says, “was to help her continue playing hockey. If I did nothing, my fear was that she wouldn’t be able to play that long [with the boys]. And she wouldn’t have that same kind of team chemistry that she would share with all the girls.”

That Léger established one of the most successful girls’ hockey events in Atlantic Canada is of little surprise, considering he had spent seven years working with female youth sports running a local ringette league; he knew to do things like approach local businesses for support. One day, he called up local Dairy Queen offices and, to his pleasant surprise, they supplied his first peewee team, the Blizzards, with full home and away uniforms. The team spent its first year travelling through Atlantic Canada, picking up games wherever it could. Opposing boys’ teams learned quickly that these girls were every bit as tough as they were.

Before long, Léger was overseeing as many as four girls’ teams at once across multiple age groups. To find a stable schedule, his daughter’s team joined a boys’ rec league in Moncton—and won the whole thing. “Word got around, and we’d hear things like, ‘Tomorrow we’re playing the girls’ team, so we’d better get ready because they’re strong,’ ” Léger recalls. “You could sense the mentality toward female hockey changing. But I knew that for female hockey to grow in the region, we needed a major tournament.”

For the past seven years and counting, the West-Kent Female Hockey Association’s DQ Tournament has been held in Moncton every January. That first year, 49 teams of different age groups showed up from across the Maritimes. The next year, it was closer to 90. Today, the tournament looks to attract at least 100 teams each year, with girls’ clubs from as far as Winnipeg taking part.

Léger, who stepped aside from day-to-day responsibilities two years ago, couldn’t be happier with how his passion project has turned out. In the continued fight for ice time and respect from the minor hockey establishment, he had plenty of opportunities to give up along the way, but there was always something deeper driving him. “Watching my daughter play, seeing her passion for the game,” Léger says, “was enough for me to keep on going.”

For more on the celebration in Moncton, follow this link.