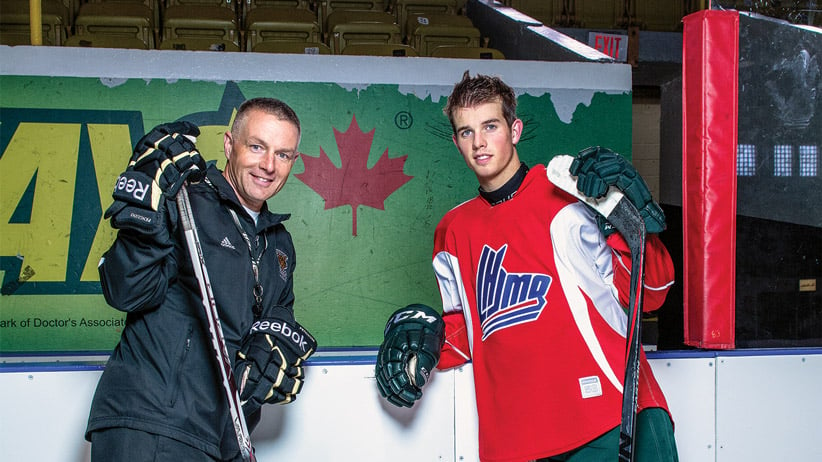 Last August, a public school phys. ed. teacher named Brad Crossley took some time away from his on-ice training sessions with peewees and bantams to put together a little series of pickup games in Cole Harbour, N.S. This wasn’t beer-league stuff. No, there might have been more talent on the ice than at any games since the Olympics in Sochi. Okay, you’ve put together that Sidney Crosby, who was in Sochi, figured into the mix. Crossley used to coach the Dartmouth Subways when Crosby was a 14-year-old phenom. And you’d guess that Nathan MacKinnon, last year’s Calder trophy winner and another local talent, would have laced them up for a summer workout. Crossley has worked with him a lot over the years, but Canadian Olympians Matt Duchene and John Tavares were just a couple of the dozen or so other pros who came out to play. “I’m not the draw,” Crossley says. “Everyone is here because of Sidney and [his trainer] Andy O’Brien. Everybody wants to be like Sid, so they go where Sid goes.”

The unassuming Crossley minimizes his role in the Crosby summer summit, but don’t mistake low-key for low-impact. Walk around Cole Harbour and you’ll see lots of kids wearing No. 87 Team Canada sweaters, of course, but some have the name Crossley sewn across the shoulders, a tribute to Brad’s daughter, Alexis, who scored the winning goal at the world under-18s two years ago. Alexis, a former minor-hockey teammate of Nathan MacKinnon’s, now attends Boston University. Soon, there will be Halifax Mooseheads sweaters featuring the Crossley name—Brad’s 16-year-old son, Brett, was the team’s first pick in the Quebec Major Junior Hockey League draft last spring. Like Sidney, Nathan and Alexis before him, Brett attended and played for Shattuck-St. Mary’s prep school in Faribault, Minn. “Sidney was the catalyst for all the players who are coming out of this area,” says Crossley, who also serves as an assistant coach at Dalhousie, his alma mater. “But since Sidney broke through, there’s more ice time out there for kids, more sheets with year-round availability. And there’s a lot more coaching and support. Sidney always wanted to be better and that’s how kids and even coaches think around here.”

Hometown Hockey, with host Ron MacLean, will stop in 25 towns across Canada throughout the year. Maclean’s will run stories from the various towns. The show from Moncton airs on Sunday, Feb. 15 on CityTV. For more information, visit HometownHockey.com.