Coach Jon Goyens has a unique grasp of the game. No wonder future stars like Jonathan Drouin keep in touch. 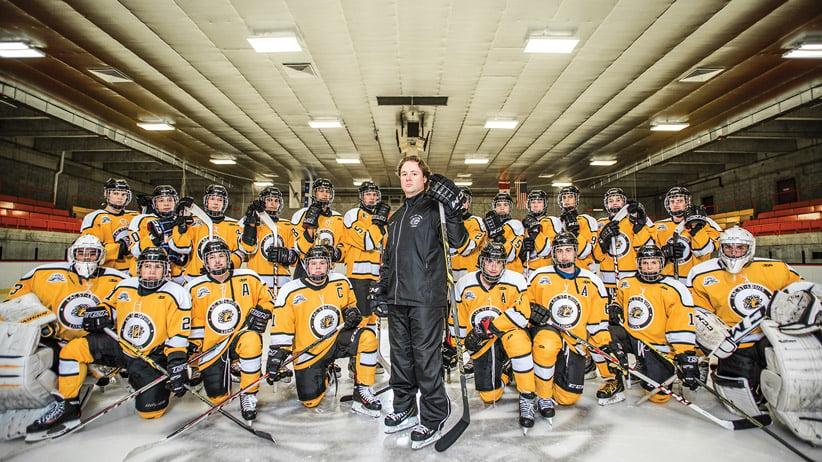 Twenty years ago, Chrys Goyens was coaching an elite bantam team in the Montreal suburb of Dollard-des-Ormeaux and was looking for another assistant to help him behind the bench. A pair of veteran minor-hockey guys helping out had their bona fides in order; they had worked for the Montreal Junior Canadiens in bygone days. Goyens, who has coached 53 youth-league teams over the years, went outside the box when he brought in his son Jon to help out. He was 15, one year older than the players he was tapping on the shoulder. “Jon was a natural,” his father says. “The other assistants said right away that he was picking up things they missed. If you can have a calling for coach, he had it.”

Just as top coaches can anticipate the ebb and flow of games, Jon Goyens had already recognized the direction of his hockey career before his father recruited him as an assistant. “The year before, when I was playing AA, I realized that I had probably gone as far as I was going to go in the game,” he says. “At 14, I knew what I wanted to do and I knew about the game.”

You’d have to suppose he did. After all, Chrys Goyens was the author of a stack of hockey books, most notably, Lions in Winter, the definitive account of the Montreal Canadiens’ rich history. When Jon, the oldest of the four Goyens boys, would pick up the phone, sometimes it would be Habs legend Jean Béliveau calling for his father. These days, when Jon’s cellphone vibrates, it might be a future star like Jonathan Drouin of the Tampa Bay Lightning, Boston College’s Michael Matheson or the Quebec Remparts’s Anthony Duclair. Those three and others playing in the NCAA, QMJHL or minor-pro ranks stay in touch with their former coach.

Since 2009, the son of the author of Lions in Winter has been the head coach of Dollard-des-Ormeaux’s own pride of Lions, the Lions du Lac St-Louis, a powerhouse in the Ligue de Hockey Midget AAA du Québec. In 2011, Goyens coached a team that featured Drouin, Matheson and Duclair, and made it to the semifinal of the Telus Cup, the national midget championship, where they lost to eventual champions Winnipeg in double overtime. Chrys Goyens’s connections to the Canadiens have given his son an opportunity to pick the brains of Scotty Bowman and Dave King. Still, when it comes to managing his players, Jon says he leans heavily on personal experience drawn from years he spent as a supply teacher. “Having kids only for a short time, I realized that you have to keep the message concise and tailored to each kid,” he says. “Some need a pat on the back, some need a stern message, some respond to extra attention. That team in 2011 is an example. Joe [Drouin’s nickname] is an easygoing, fun kid who would never leave the rink if you didn’t kick him out. Matheson [a defenceman drafted by Florida in the first round in 2012] is almost too serious. I put Joe and Mike in lockers next to each other to try to balance each other out. [Duclair] would let himself get frustrated. If you’d take him aside—not getting in his face—and tell him, ‘This is how you handle a situation,’ he’d get it. One message isn’t going to reach all three. It’s no different at the arena or in school.”

Whether he draws on a lesson learned from Bowman’s experience with the original Lions of Winter or experience getting the attention of a slacker in the back row of class, Jon Goyens reaches them in Dollard-des-Ormeaux.

Hometown Hockey, with host Ron MacLean, will be in Dollard-des-Ormeaux on Jan. 31 and Feb. 1. The show airs on Sunday, Feb. 1, on CityTV. For more, visit HometownHockey.com.