How Asimina Arvanitaki will explain the universe 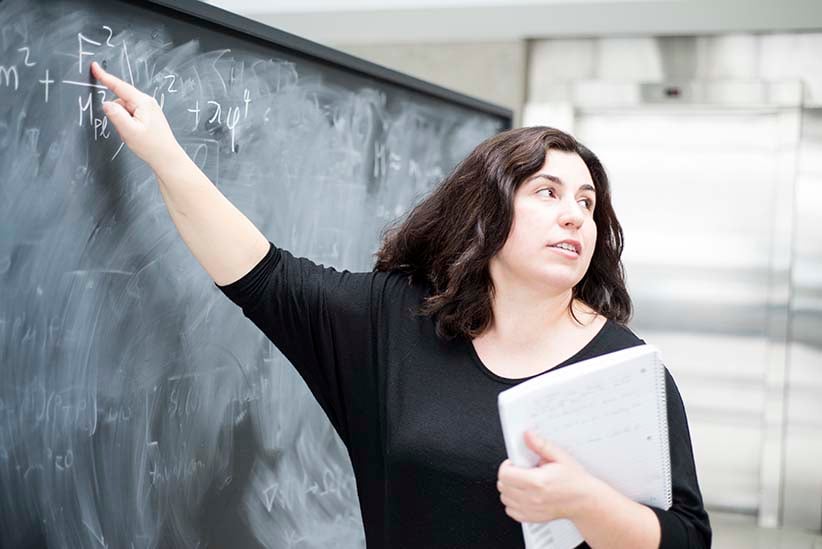 Asimina Arvanitaki wants to explain the universe. The Greek-born theoretical physicist’s goal will be a lot easier after today, now that she’s received an $8-million research chair at the Perimeter Institute. Arvanitaki was named the inaugural Stavros Niarchos Foundation Aristarchus Chair in Theoretical Physics at the Waterloo, Ont.-based centre. She’ll spend her five-year term, jointly funded by the Perimeter Institute and the Greek-based Stavros Niarchos Foundation, furthering her own cutting-edge work and contributing to education and training for young people in Greece. Arvanitaki is a young superstar, on the cutting edge of research in supersymmetry, dark matter, and extra dimensions. She’s also the first female research chair at the Perimeter Institute and, after today, one of the best-funded academics in Canada.

Q: You are the first female research chair at the institute…

A: Yes, yes, that’s true. I have to say there’s not as many of us in physics.

Why do you think there are fewer women in physics?

I think the problem starts when you go above a certain level. When I became a grad student in theoretical physics at Stanford University, I think I may have been the only female student at the time in that field. In the past few months, I started talking to several women that PI [the Perimeter Institute] is associated with. Several women in business, several women in finance, in all other fields of life, and they have similar experiences. It’s harder for people to acknowledge your independence and acknowledge your potential as a leader in certain areas. Sometimes it’s not because they do it on purpose. I think there are some stereotypes that people don’t even realize they have. For example, I smile a lot, I’m very open-hearted and silly, but I’m very serious about my work. So sometimes it may have come across as: ‘How can this person have any serious ideas or independent thought about what’s good to do?’

I wrote a story last year about how two female judges on the Canadian science and engineering hall of fame resigned in protest because, for the second year in a row, there weren’t any women nominated for the awards. Those female judges were talking about very similar things to what you are: women were less likely to be seen as leaders, so they weren’t being nominated by their colleagues, so they couldn’t win awards. When you talk about noticing it when you progress farther on through grad school, is that because there were fewer and fewer women?

Yes, there were fewer and fewer women, and also I see the response of people. For example, I won’t mention names, but my advisor in particle physics is a big shot. So for many people in the field, they can not see me as independent, even though if someone were to look at my publication record, they would see that my publication record proves my independence. There are other people that are my male counterparts who only write papers with certain people all the time, and they’re considered more independent.

Did you see that study, I think it came out in the New York Times, which was that if women are co-authors with men they are less likely to get the credit?

Yeah, I did, I did. There’s been a lot of really good research on this lately. There are lots of subtle stereotypes or ideas people have in their heads that are a bit subconscious about women or other minorities for that matter.

Why the Perimeter Institute? I know there’s amazing research being done at MIT and Cambridge, and elsewhere. Was there something that was particularly attractive about coming here?

Well, I’ll tell you for a while I was resisting come here because … Have you been to Waterloo?

So it’s not the most exciting place in the world, right? I was resisting coming here for a while and then I finally came here and it was great. I’ve worked at places like Berkeley, Stanford, I’ve visited CERN every summer, but Perimeter was, I have to say one of the institutions, it’s not the first institution, where I felt like as a researcher my possibilities were endless. If I had an idea in my head and I wanted really to do something, someone would help me achieve that. I feel the environment here is just intoxicating.

What do you see as the practical applications for your work?

Oh my god. You know that’s the toughest question you can ask a theoretical physicist. The reason I think most of us do theoretical physics is out of a childlike curiosity. We just want to understand why things are the way they are. If you put in your mind a certain very specific technological goal, it’s not always going to get there, but some of the things from a very different perspective may get there faster. For example, take the laser. When the laser was first invented people were like: ‘It’s cool, but what do I do with it?’ Imagine your life without lasers now.

The reason why I ask is, the last federal government had a real focus on scientific research that had a direct industry-based application. And they structured funding based on things that they thought would bring money in…

Can I say something? I’m Greek and I’m allowed to say this, I think. The model of ancient Greece, right, take Socrates, all these great people, no one asked them to invent the next quantum computer. They were allowed to think about whatever they wanted to, and this is how a great civilization came about. I think leaving people to think, and that doesn’t go just for physicists. I think it applies to everything. It applies to art, literature. I think this is the part that basically makes us human, so I don’t think this is a waste no matter what the outcome. I don’t think this can be a waste.