For many Canadians, a non-religious face-covering used to signal danger or shame. Now going without one does. 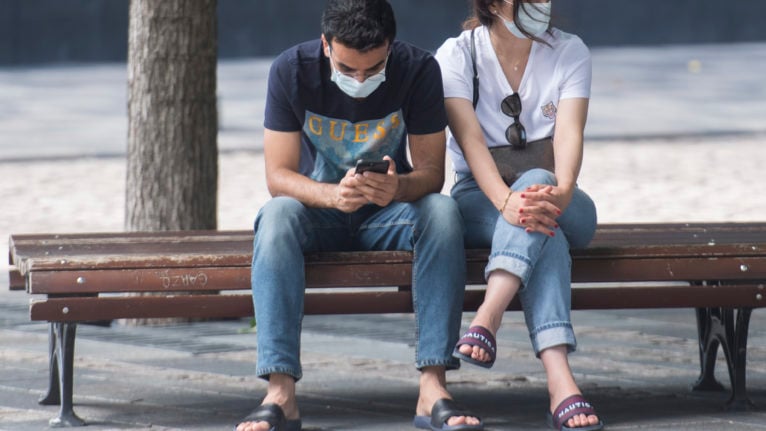 In June, I walked briskly into my local bank then stopped just inside the front doors, with only one thought in my mind: “I’m wearing a mask in a bank!” Sure, my handmade fabric mask—a Provencal print in muted tones of blue and green—hardly screamed “hardened criminal,” yet my heart was thumping. As I stood with other customers on our physically distanced floor dots, wiping our hands with complementary hand sanitizer, I noticed that few others wore face coverings.

In mid-July, I was back at that same bank in downtown Toronto. The standard retail rules of “no shirt, no shoes, no service” had been expanded: no one was allowed into the bank without wearing a mask.

More than a breach of law in big cities like Toronto, entering a commercial or indoor public space without a facial covering is actually becoming a faux pas in communities across the country. The change is coming not just from governments and businesses, but from society itself. While pumping gas in rural eastern Ontario in early August, I saw a farmer pull up behind me. He got out of his truck and glanced at me and the other customer. We were both wearing masks. Though everyone was outside and well physically-distanced, the farmer immediately reached into his pocket for his mask and put it on.

“What’s dramatic is how rapidly this behavioural shift has occurred,” says Frank Graves, president of Ottawa-based EKOS Research Associates Inc, which has tracked the societal transformation. In late March, just five per cent of Canadians polled said they wore face masks in public because of COVID-19. By the end of July, mask-wearing had jumped to 76 per cent. “In previous eras, attempts to [encourage people] to behave more safely have taken decades, not months,” notes Graves. “This is a once-in-a-lifetime collision of economic and health risks and it’s produced an astonishing response from the public.”

But it has happened before. In the winter of 1940-41, in wartime Britain, government scientists were becoming alarmed that the hundreds of thousands of people sleeping in crowded, poorly ventilated communal air raid shelters would be susceptible to respiratory diseases, especially during the seasonal flu season. Their solution: “germ masks.” The face coverings ranged from homemade ones (made of paper, cloth and even gauze), to cellophane face shields, which only covered the mouth and nose and even fashionable yashmak veil masks. To encourage acceptance, they created a propaganda film, titled “A-tish-Oo,” that was created to promote mask usage: “If the shelter doctor or nurse gives you a mask, well, wear it!” the narrator said.

The wartime mask mandate was rediscovered by Jesse Olszynko-Gryn, a historian of medicine who studies how health technologies become mainstream consumer products at the University of Strathclyde in Glasgow, Scotland, and his fellow researcher Caitjan Gainty, a historian of 20th-century health care at King’s College London. The historians didn’t find evidence of any significant push-back: even when British wartime scientists acknowledged that wearing masks may be uncomfortable, they were seen as sensible and patriotic, Olyszynko-Gryn explains.

RELATED: Why Theresa Tam changed her stance on masks

Even without the existential threat posed by war, “people will put up with very tough restrictions, so long as they think they have merit,” states the historian, who also combed through newspaper archives to track mask-wearing during the Spanish Flu pandemic of 1918. “Get out your flu mask and wear it regularly,” started an article from October 1918 in the Vancouver Daily Sun. Yet, despite the exhortations, many were still reluctant to wear them, says Olyszynko-Gryn. Alberta rescinded its masking order four weeks later; Edmonton’s medical officer of health reported it had become an object of ridicule after the disease kept spreading through the community.

By contrast, Canada started its COVID-19 lockdown early, when the cumulative number of cases had just topped 100 across the nation. Then, initial public health measures focused on staying home, hand-washing and distancing. Medical masks were seen as being reserved for frontline health personnel. Yet, as other jurisdictions, such as Hong Kong, Vietnam and the Czech Republic, showed how the widespread use of non-medical masks could cut infection rates dramatically, attitudes began changing in Canada. In early April, medical experts, including Dr. Theresa Tam, the country’s chief public health officer, expanded their COVID-19 advice to include wearing non-medical masks in crowded or public places.

Was that shift in official policy a tipping point toward mask acceptance in Canada? No one is sure, at least right now, and Graves’s polling reflects a steady growth in mask wearing over the last few months without any specific uptick. For the sociologist, who has studied risk behaviour for years, the result of this increasing acceptance is that, a vast majority of Canadians, masks are seen “as a precondition for safe passage to the period where we have a vaccine or cure.”

Certainly, the focus on citizens wearing non-medical masks intensified as the nation started down its reopening path in May, bringing people back into close contact with each other in restaurants, shops and hair salons. Along the way, the message from governments has been reinforced by influencers, including hockey great Hayley Wickenheiser, who, as a medical student in a hospital, wears masks daily.

RELATED: The history of our cultural resistance against masks

Along the way, some public health experts have voiced concerns that the intense focus on wearing masks means other crucial measures to stop the spread of COVID-19 will get short shrift by citizens. “First, distance two metres and wash your hands, and then wear the damned mask,” says Dr. Lynora Saxinger, an infectious diseases specialist at the University of Alberta. The importance of all three measures was highlighted in a recent Dutch analysis in the journal PLoS, which found that “a large epidemic can be prevented if the efficacy of these measures exceeds 50 per cent.”

Graves’s polling research into the current array of public health measures appears to allay concerns from experts like Saxinger. What he found by asking questions of those who are masking was a “strong virtuous circle” that starts with wearing facial coverings: “If you mask, you are significantly more likely to maintain social distance, stay at home, avoid risky situations, to not touch your face… If I were to take a single predictor of who is behaving safely right now, it would be the people who are masking.”

While mask-wearing is increasing everywhere, the behaviour appears more common in areas hardest hit by the pandemic. Returning to Toronto after a recent visit to Ottawa, which wasn’t as badly affected, I was struck by how many more Torontonians wear masks while walking (including when well away from others), cycling and even driving—all activities not covered by the city’s mask by-law. While that’s anecdotal evidence, there is data to show that just asking people to wear masks can change behaviour. Even though the Toronto Transit Commission isn’t enforcing its mask policy, 95 per cent of passengers wear them, says communications specialist Stuart Green. (It’s a far cry from 2003, when the TTC told its drivers not to wear masks, even though the city was a hotspot for SARS, another new, deadly coronavirus.)

Yet, at the same time, there has been what Sadiya Ansari called a “cultural resistance,” when she wrote in April: “While there are established reasons that normalize mask-wearing in East Asia countries where they are commonly worn, in Canada, the lack of these norms has been our biggest barrier. It’s meant that instead of seeing masks as a form of communal protection, masks evoke panic.”

Graves sees that backlash in his polling: among those who won’t use masks is a growing minority who are falling not only out of compliance but into defiance. For them, masks are seen as “a symbol of those who reject expert authority, who reject health science, reject government notions of what you should do,” he says, similar to anti-vaccine activists. Anti-mask protests have occurred in many places, including at Olympic Plaza in Calgary in late July, ahead of the start of the city’s mask bylaw.

Yet, even in the United States, where President Donald Trump and other Republican politicians mocked their usage for months, mask-wearing is increasingly popular, in part because COVID-19 is spreading so widely that 50,000-plus people are being infected and more than 1,000 are dying each day. A recent Associated Press poll suggested that national support for mask mandates has grown to 75 per cent, while a new Huffington Post poll found that 92 per cent of Democrats and 68 per cent of Republicans believe people “should wear face masks when they are in public around others.”

Early in the pandemic, Olszynko-Gryn felt “a little embarrassed” when he wore a mask in public well before most of his fellow Glaswegians. Now, he says, “it would be inappropriate” not to.